Got an email yesterday from people I know, regarding a missing border collie.  Phin had come up from Portland to a foster home in Mission (about half an hour from us).  When they got him home and were getting him out of the car, he got scared and since the leash wasn't on him yet, he had a chance to bolt, and he did.  It was 7 in the evening.  The foster parents searched until dark and beyond but no luck. 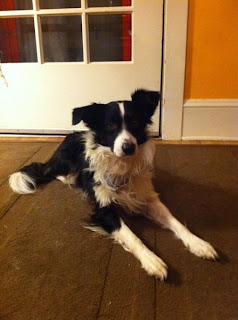 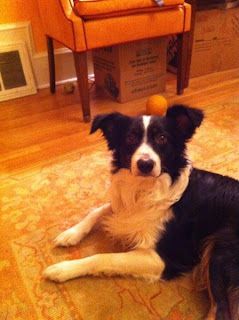 Photos from PNW border collie rescue site.
I know that sickening feeling when a dog has gone missing.  It has happened to me twice, but thankfully with a good ending.  I said I was willing to come over and help them this morning.  Jake and I got there about 8am.  Since Phin is nervous with strangers, I thought walking around with a dog might be a good idea.  'M' and 'S' had stopped for something to eat when I got there, so I said I would walk up the side road where Phin had last been seen running.  The first house I passed, there just happened to be someone pulling out.  I talked to him, showed him Phin's picture, and he said he had seen a dog just like that, running through some yards about half an hour before.  I ran back to the house to tell 'S', and we set off down the road.  The guy I talked to went ahead to see if he could see the dog again, but he couldn't.  We walked on, but in the area where he thought he saw Phin, 'S' saw an australian shepherd that we think the guy mistakenly thought was Phin.  After more walking around, talking to people, handing out the phone number in case they had a sighting, talking to a police officer who was going to pass the word on to the rest of the patrol cars,  we returned back to the house.  By this time more people had shown up.  Posters were made and taped up on signs and mailboxes.  Someone with a golden retriever was doing some tracking.  She thought they found a spot where Phin bedded down for the night, in the bush next to where he had gone missing.  'S' had searched through there a few times.  Jake and I walked up the road where he had run, calling gently, taking our time, stopping to just listen.  This is a very rural  thickly wooded area, with a small mountain behind the property. We walked to the top of their back pasture, played a bit of ball, called, whistled, and just waited and looked and listened.  The Food Lady from Wootube, showed up with her pack.  She walked around with Tweed, but no luck.  I finally left about 11.  Hopefully flooding the neighbourhood with signs and posters will help bring Phin home.
Posted by Karen at 2:32 PM