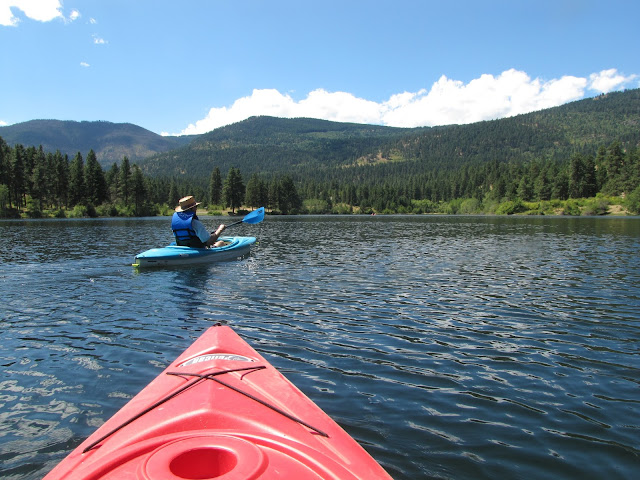 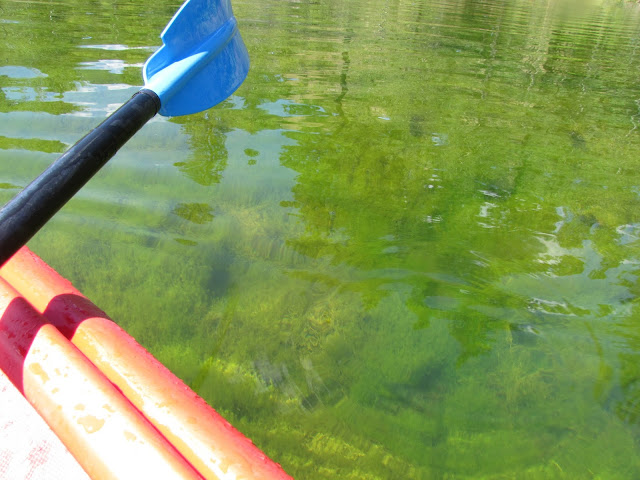 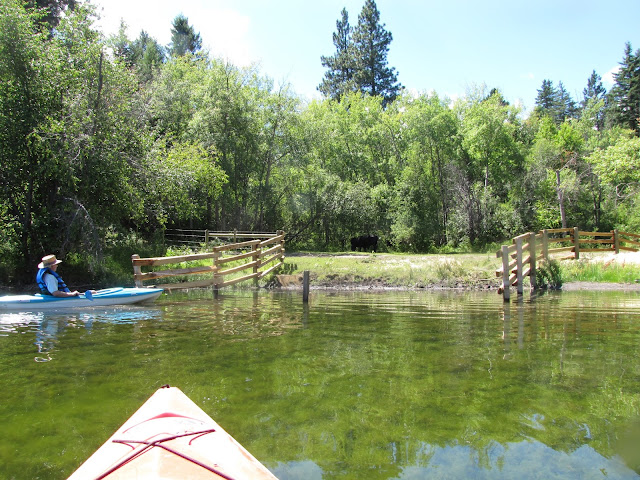 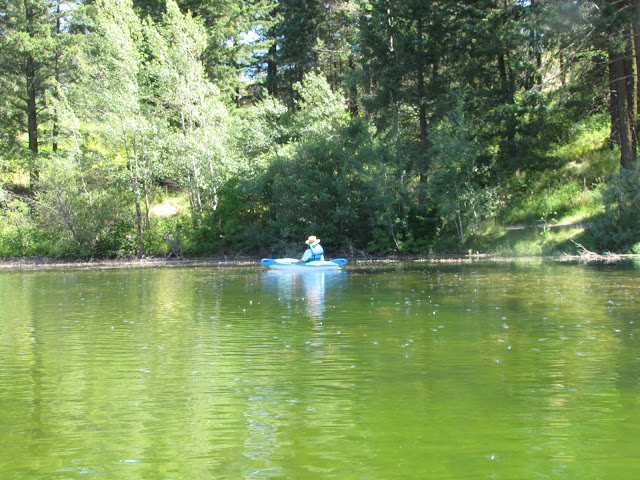 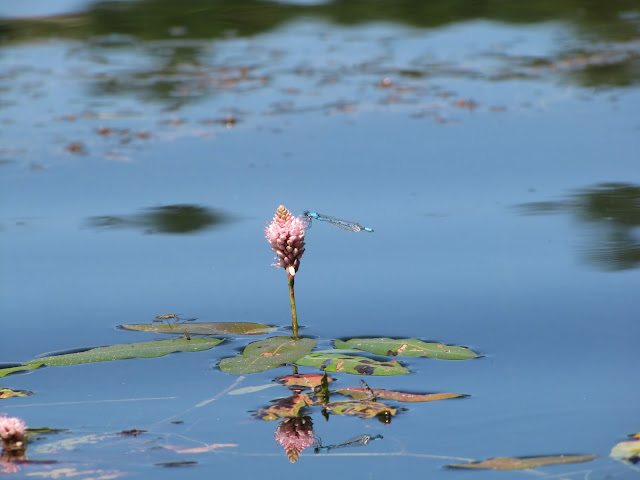 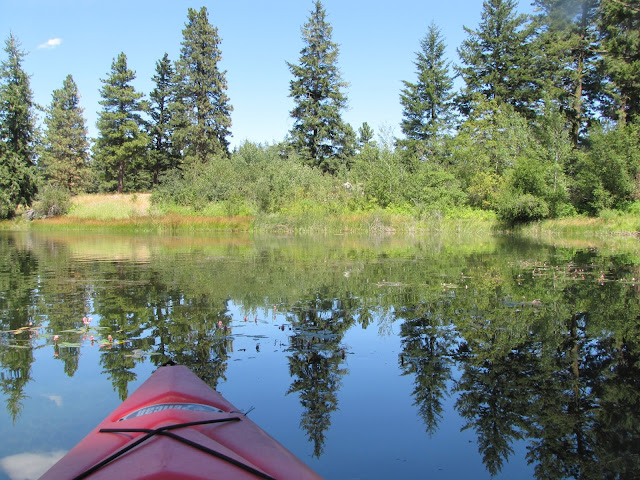 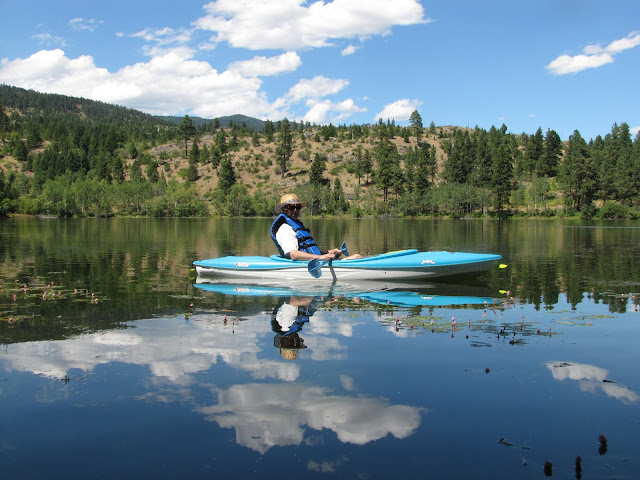 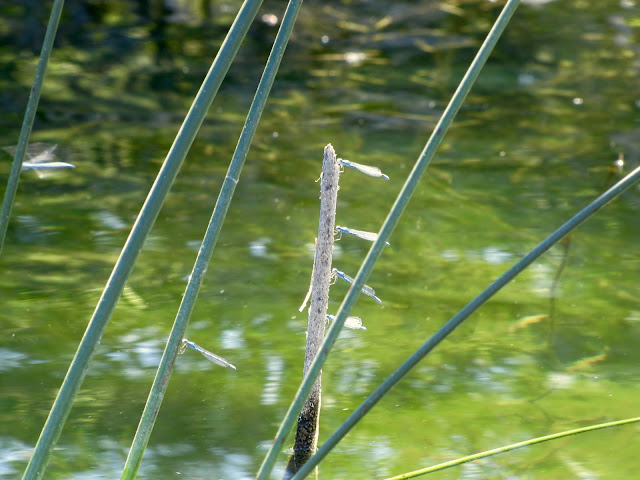 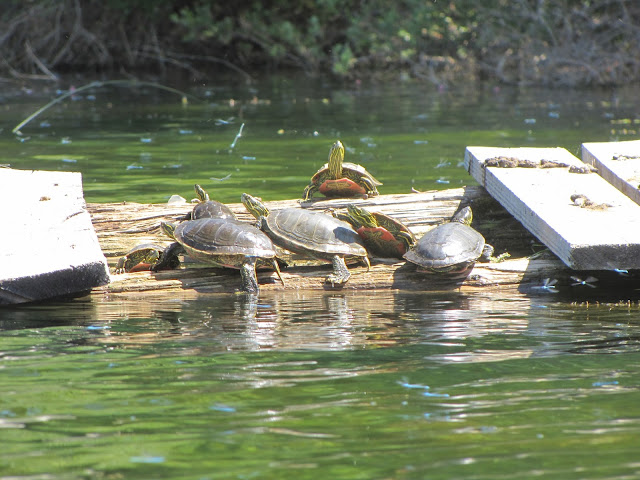 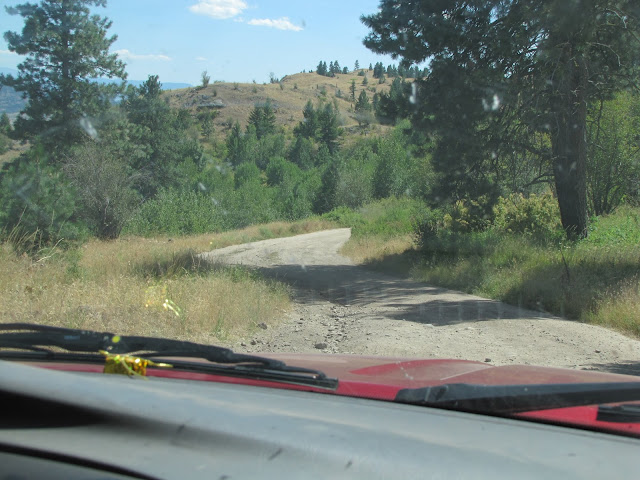 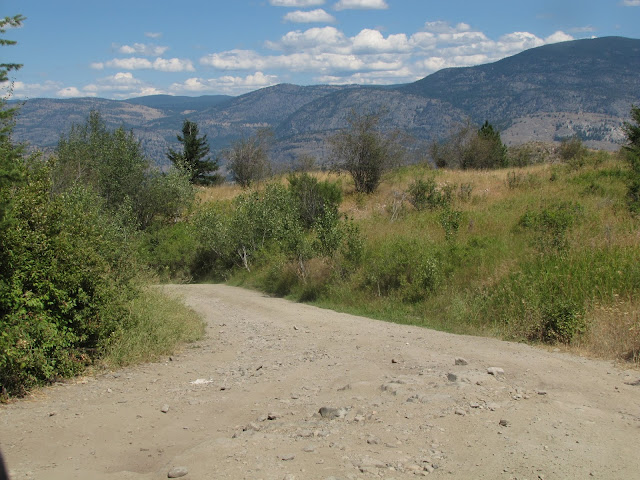 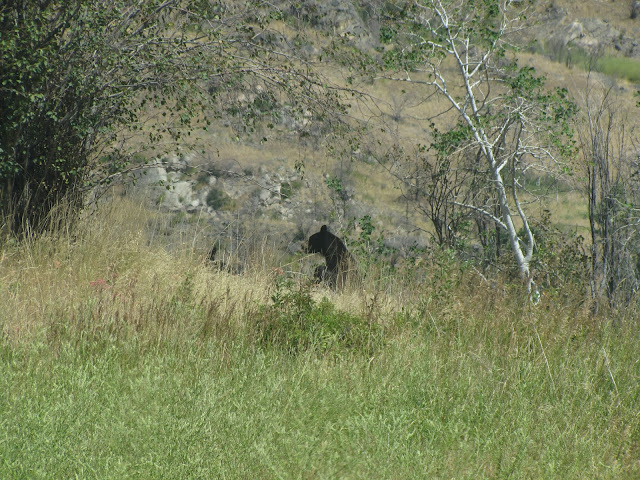 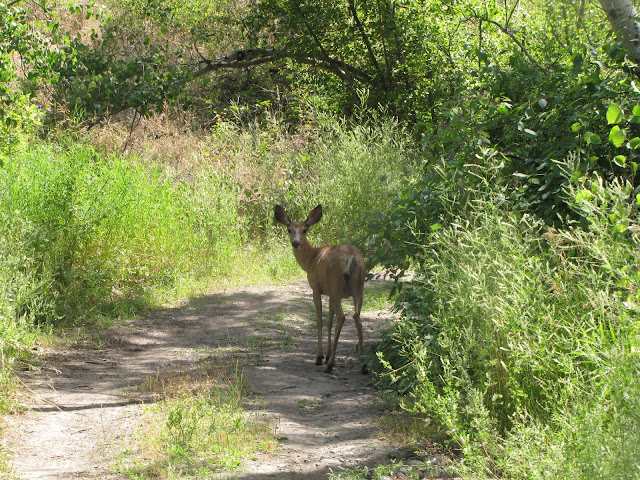 We were slow at packing up after the Sunday market.  It had been a busy day.  The week before at the market, I had done something to my ribs on my right side while leaning over the side of the market trailer and trying to stretch enough to reach for something on the far side. The wood side of the trailer was digging into my ribs.  All of a sudden there was a pop or crack or some sort of noise and pain in the rib area. Not sure what I did, my best guess is that I tore a muscle on that side, or maybe I cracked a rib? Who knows.  It had bothered me on and off all week, depending on what I was doing.  At times the pain was brief but excruciating.  On Saturday I hardly noticed it, but on Sunday while setting up at the market it returned in a fury, and bothered me all day.  Therefore I was taking it slow easy when we were taking down.  We are generally one of the last vendors to leave, and the market manager was still there also.  She called over, asking me if I wanted any basil, and then she said I could have it all, maybe to just feed to the chickens. She had been given a box with about 12 large bunches of basil in it by another vendor.

I used to grow basil, a lot of it.  Many years ago a few women who met at a Moms and Tots class started growing it and taking it to sell to some of the vendors at Granville Island.  Duso's and the Stock Market had regular orders.  After that enterprise folded, I still continued to grow a large bed of basil and sold it at the markets.  Two or three years ago the basil was hit by downy mildew.  After I got a cut or two off it it the leaves started to yellow and it developed black spores on the underside of the leaves.  The whole bed was affected.  The same thing happened last year, so this year I only have a few small clumps up by the tomatoes in the other garden, that I bought from a nursery.

When we got the gifted basil home I had a look at it, and thought it looked a bit sad and wilted.  I put some water in a big bin and propped all the bunches up and put it outside overnight, thinking that the dew would help to freshen it up.  Well the dew part didn't happen because it clouded over during the night, but the basil was slightly perked up.  I offered some of the loose leaves to the chickens but they pecked at it once or twice and walked away.  So I decided to make pesto.

Usually what I have done with extra basil was to just blend it up with some oil and freeze it in ice cube trays, and then add a cube or two to pasta sauce.

This time I decide to make actual pesto, or close to it at least.  I thought about looking at an actual recipe, but really didn't want to.  I wouldn't have liked the first one I saw, which would lead to me looking at ten more, and then I have to decide on one, or take parts of different recipes, and then read it every two minutes because I couldn't remember the amounts. Ugggghhh.  I dislike having to follow a recipe.

So I knew the basics.  Basil, olive oil, garlic, nuts, salt.  No cheese in this house.
I took about 1/3 of the bunches, washed and spun them in the salad spinner and ripped everything off the big thick stems. 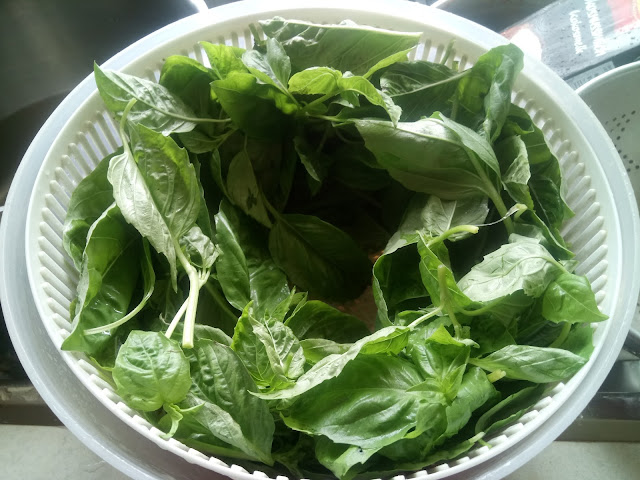 Yay, a way to use up some leftover garlic scapes.  So I chopped a couple or three of those up. 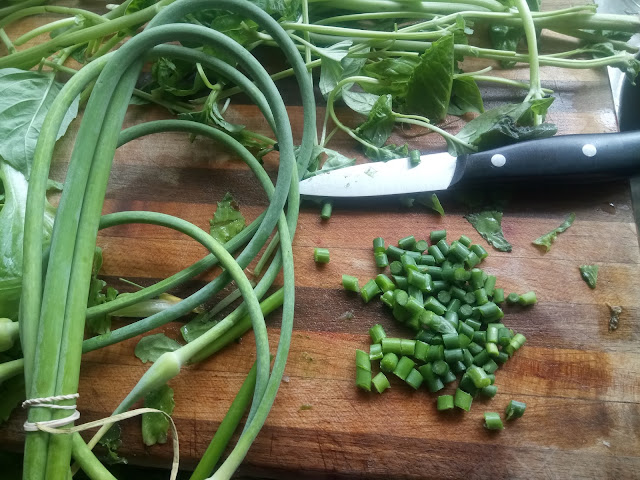 Tossed the greens in the food processor, poured in what I thought was enough oil, a decent handful of walnuts and a bit of sea salt. 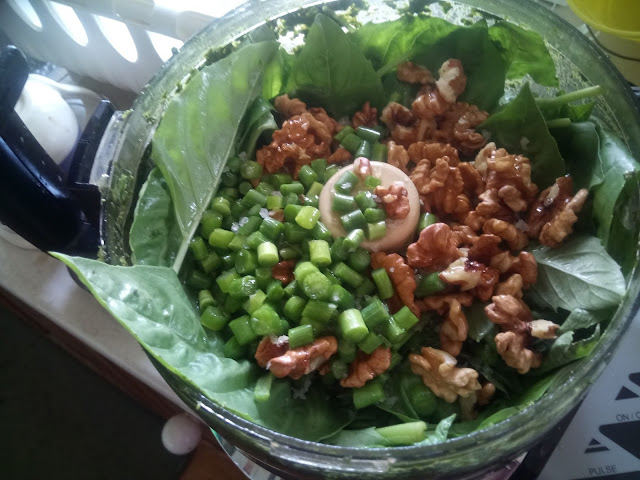 One batch down, two more to go. 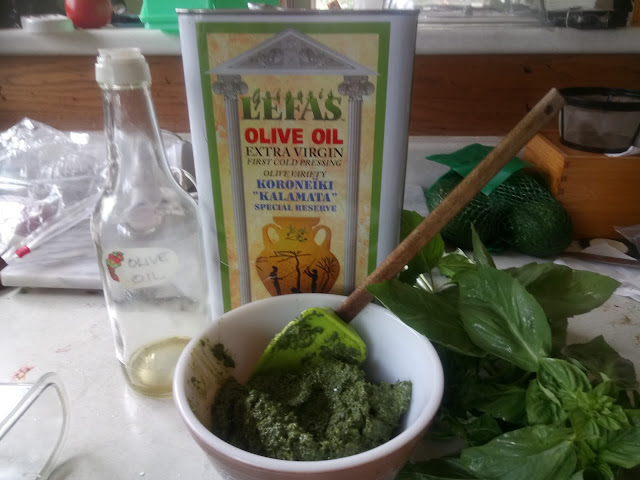 I think it made about 5 cups.  I didn't have any decent ice cube trays, so used some 125 ml canning jars. It filled up 9. (I'm pretty sure I ate what would have filled the tenth one).  When it's frozen I'll run hot water over the bottom of the jars and slip the frozen pesto out and store the blocks in a freezer bag. 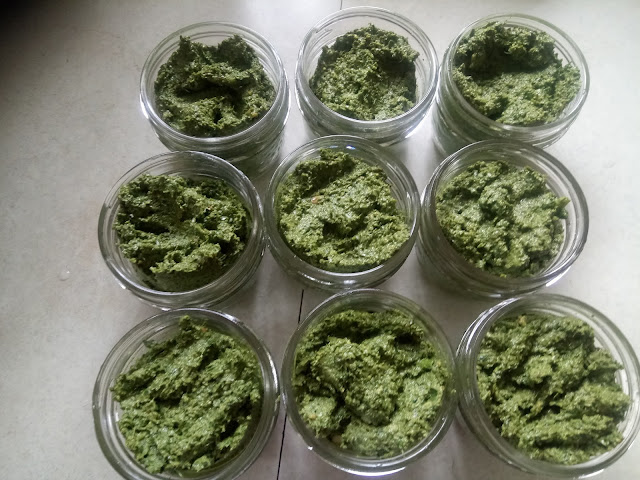 On Mothers's Day Meredith had us over for supper.  She made a recipe with chicken and pesto, and it was really good.  I sort of tried to replicate it tonight.
Sliced chicken breast sauteed in coconut oil and then one of the jars of pesto dumped in and stirred around, the sliced tomatoes added to the top and then it was put in the oven to cook a bit more, along with the cauliflower rice.

So tonight's dinner was......
Leftover salad greens from the market, cauliflower rice on top, and the chicken mixture on top of that.
Not as good as Meredith's but tasty all the same, and I didn't have to follow a recipe! 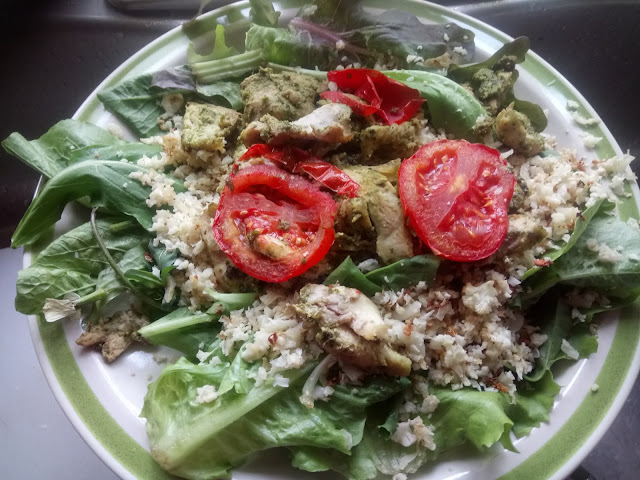