It's Miserable Out, so Let's Eat!

At the beginning of last year I made some lemon marmalade that turned out really dark.  I didn't really want to  sell it, so just put it aside, not knowing really what I was going to do with it.  It's really frustrating when you have put a lot of work into something, and it doesn't turn out like you wanted it to.  It tasted fine, but time passed and then I just felt like it was too 'old' to sell, so it sat in the cupboard.
Larry and I really like fruitcake, so before Christmas we decided to make some, or maybe it was more like we decided that I was going to make some.  I started checking out the ingredients, and got really put off when I was looking at some of the candied fruit and the ingredients and additives that were in them.  In the end I used some dried fruit and a jar of runny seville marmalade and a jar of the lemon marmalade, and the fruitcake was great!  I think I made 6 or 8 loaves all together, and I have a feeling there should still be one at the bottom of the freezer, but so far I haven't come across it. 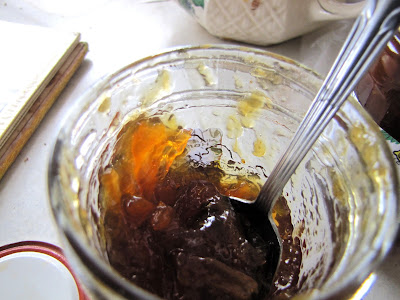 It's a rainy miserable Sunday morning, and there is nothing good in the house to eat.  No bags of dark chocolate dipping wafers sitting in the fridge.  Did I ever tell you that we buy them just to eat, not to bake with?  Anyway, I decided to bake something.  I dug out a couple of jars of the dark lemon marmalade, and made lemon blueberry muffins. 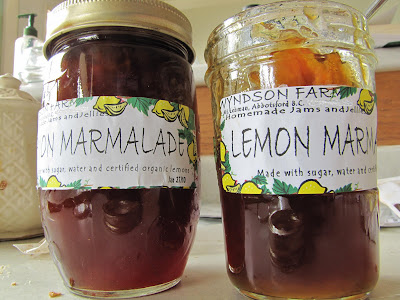 Here's the original recipe.  I keep a lot of the recipes that I've saved in an old photo album.  The kind that has the plastic over each page that sticks to those sticky strips on the page.  This page has lost it's plastic. 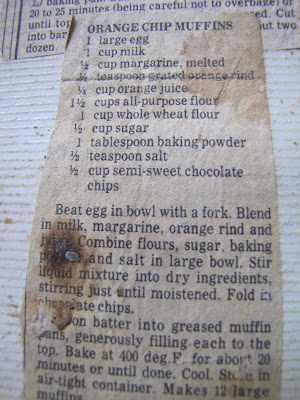 And here's what I did.
First of all I doubled this.  If you are going to dirty bowls etc, you might as well make it worth your while.
So the two cups of milk became two cups of a bit of leftover cottage cheese (1/2 cup maybe?) plus enough milk to make the two cups. Yogurt would work too, well maybe plain or vanilla yogurt.
The one cup of margarine became 3/4 cup of oil. Gotta make it healthier you know!
I left out the orange juice and rind and dumped in two cups of marmalade.  It would have been 2 1/2 cups, but I ate nearly half of one jar before I got started:(
Here's all the wet ingredients.  The marmalade sank to the bottom. 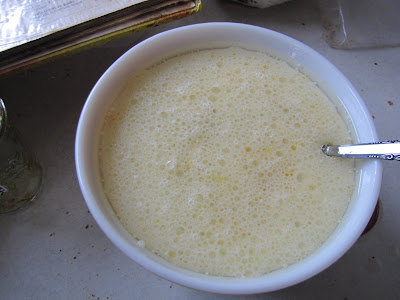 Jake was hoping a few ingredients would sink to the floor 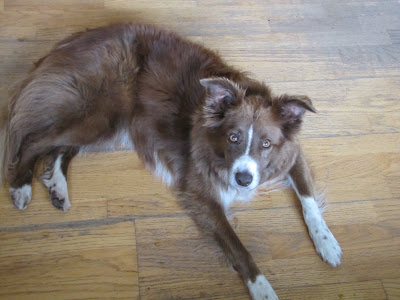 Here's the wet ingredients added to the dry.  I only put in half a cup of sugar total, since there is sugar in the marmalade.  The recipe calls for a mixture of wholewheat and white flours.  If it hadn't, I would have done that anyway.
I was daydreaming and almost put in two tbsp. of salt instead of baking powder.  Thankfully there was only a tiny bit of salt in the box, so I came to my senses while I was opening the new one. 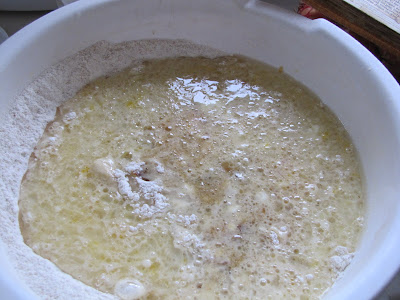 Mix it all up and add some blueberries.  I probably would have added a couple of cups, but there was only about 1/2 -3/4 cup left in the freezer in the house, and I couldn't be bothered to slog out through the rain to find some in a freezer in the shop.  Maybe that was just as well, as I do tend to overload on things sometimes.  Some blueberries are good, so wouldn't more be better?
Nope, not always. 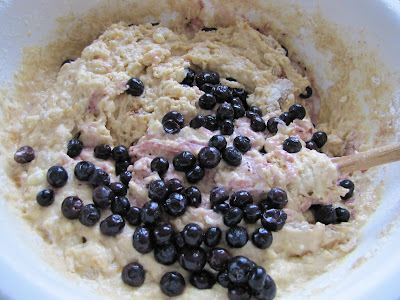 I ended up with 2 dozen medium size muffins, and 6 small ones. 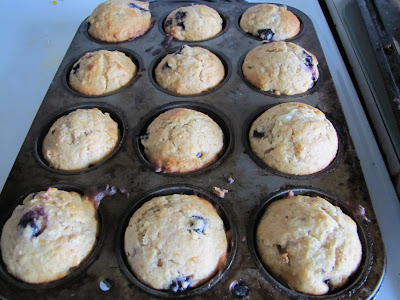 One of our favourite variations on this recipe is to leave out the orange, and put in a can of mandarin orange pieces, and the chocolate chips of course.  Or instead of the oranges, some cut up dried apricots, heated with a bit of juice or water so they plump out.
I think I've figured out now how to avoid ending up with such dark marmalade.  Making marmalade is a long process.  First you cook the peel and juice and membranes with water, until the peel is tender.  Then you add the sugar and cook to the setting point.  It seems if you have to cook the marmalade for a long time on this second step, the sugar causes it to go dark.  I've decided to cook it for longer in the first step, so that more water is evaporated.  Then it takes a shorter time in the second step to get to the setting point.
That's my theory anyway, and so far it seems to be working.
Posted by Karen at 1:49 PM