Just a bunch of this and that....
Here's Luna driving back from the dyke this afternoon.  First she was sat leaning against the door with her head resting on the ledge where the glass starts, with her eyes closed.  Then she finally laid down with her head pointing straight up.  It was a bit crowded at her end of the seat, but that doesn't usually bother her, she just rests her head on another dog's back.
Today though, I was getting a stiff neck just looking at her.  That can't be comfortable! 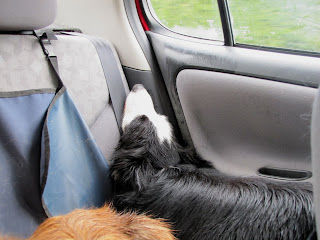 We brought home the rest of our laying hens this afternoon.  We had sold the other hens over the weekend. It was the usual Craigslist fiasco.  The first person I talked to wanted 10, and they came when they said they would.  The second person wanted them all, but we told her that she could have the remaining 42.  She talked about just having moved to a new place, and the large chicken coop and run that was there... It was all good, she was going to come the next night.  Of course in the meantime I fielded lots more enquiries, and told them that the hens were all spoken for.  And so of course the person that was going to take the 42 doesn't phone, doesn't come, and doesn't answer their phone when we try to call them. Ugh. It just floors me how inconsiderate, well how downright rude they can be.  In the end the first person came back for another 20, and a guy just down the road took the rest.
So the hens we brought home today are also supposed to be Bovan Browns, like the first bunch.  Well, the combs on them are way different, they almost look like a leghorn's.  They are much older, and are already laying full sized eggs.  I don't think they came from the hatchery where we picked them up, as they were sitting in crates where we backed up to the barn.  There is no hatching date on the paper work.
I'd be getting the pullets from somewhere else if we had a choice.
We brought them home early afternoon and they laid 3 large eggs after they got here.  I cracked them in to the dogs dishes tonight, and the yolks were a good colour.  It will be interesting to see how many eggs we get tomorrow. 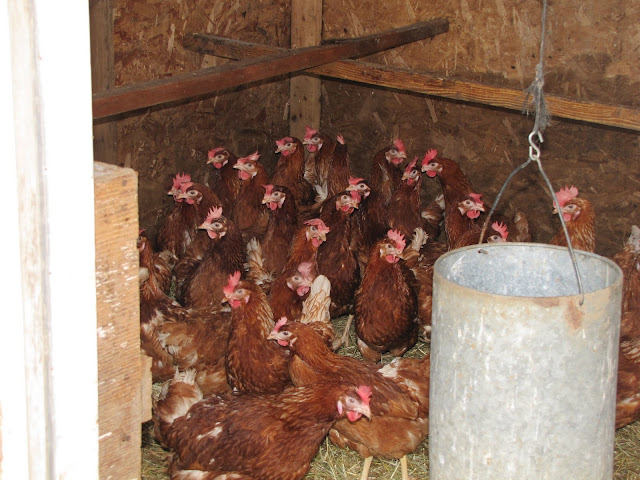 Some of them were already wanting to come out, so I put the dog's x-pen around the door so they couldn't wander off.  Very useful things, those x-pens.  I threw some grass clippings in so they could get a start on some green stuff. 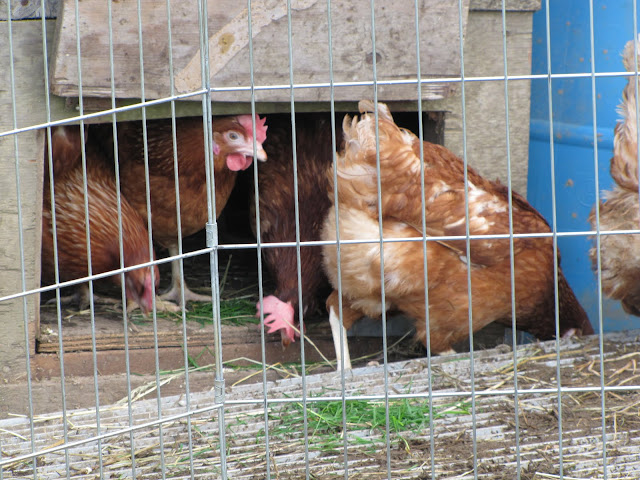 In the greenhouse, the basil I seeded on Friday I think it was, was germinating by Sunday, and now looks like this. 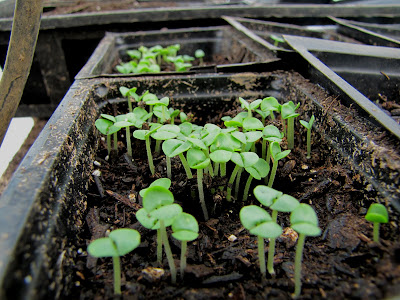 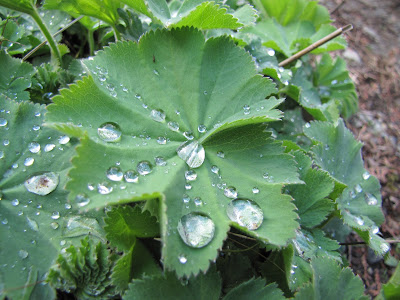 Double red peony.  They are always quite early 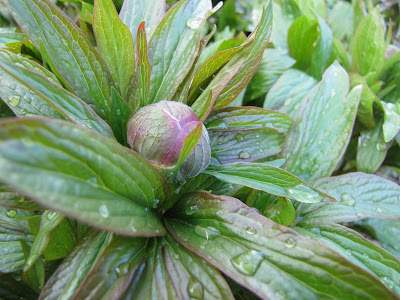 A fiddlehead, or unfurling fern. 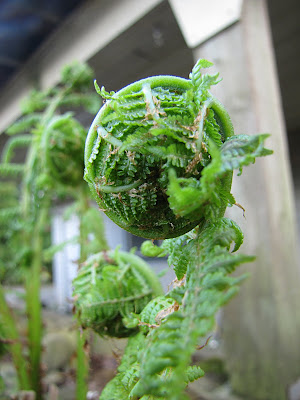 The tulips are starting to bloom, about two weeks later than last year.  The fruit trees are four weeks late, and they still aren't blooming.
Our weather generally continues to be the pits.  Mostly unseasonably cold, and wet.  Oh sure, we get some sun and had one warm day, but not a nice long stretch.   A lot of the vegetables I've seeded aren't doing anything.  Some are though, the peas and broad beans are looking good.
Meredith is on the last day of her tour of Europe tomorrow, and then she flies out of London on Saturday. She is doing her best to not be in London for the royal wedding.  It wasn't something she even thought about when she booked her flight, unfortunately.
From the emails she has sent us, she has had an amazing time, and hopefully she will eventually update her blog and tell you about it all.