We seem to have had waaaaay too much rain just lately.  Last Friday it rained all day.  The weekend was nothing to write home about, and then yesterday it rained all day again.  This morning it was still wet, but wasn't raining until just after I got up, and then rained until lunch time.  This afternoon we got a 6 hour break, and then at supper time it started raining again.  It is a sloppy wet mess.  Rubber boots are the only footwear, and rain gear is hung to dry near the wood stove.  On top of that, it's cold.
Yesterday I was up in the orchard garden, digging a trench to try and drain the water that is running out of the old riding ring and over the garden.  Actually half of that garden used to be part of the riding ring.  It was scraped flat, down to the hardpan, and hog fuel (chunks of cedar bark) were added on top.  Eventually we made the riding ring smaller, scraped all the rotted hog fuel out and piled it up.  Then we spread it back out, some grass grew, and years later it became the basis of the orchard garden.  So we have about 6 inches of soil on top of hard pan.  It doesn't drain very well.  In fact half of it was underwater.  I dug a trench trying to intercept that water running down the hardpan.  The whole riding ring slopes to the end that is now the orchard garden.
I was rudely reminded that one rubber boot has a large slit at the front of the ankle.
That afternoon I slogged around the block, in the rain, with all three dogs.  Larry is having back trouble so he didn't come.  It wasn't much fun.
This morning, while it wasn't raining, at 8am, the phone rang.  It was this guy that has been buying some hay from us, the stuff left over from our haying fiasco last summer.  We are just about giving it away, for much less than it cost us to make it.  This guy takes seven bales at a time, tied on the roof of his car.  The hay is out in the horse shed, and there are three muddy spots to get through to get there.  Not suitable for a mere car. So it always involves bringing the hay down from the shed to the driveway.  Sometime Larry has brought it in wheel barrows, but today we took the tractor and trailer.  As he backed up to the trailer, I spy a mouse staring at me from under the tractor seat.  I mention it to Larry, and he said there were two in where the battery is, when he flipped up the lid.  Since you have to do that to start the tractor (long story), I don't think I'm going to be starting the tractor any time soon.
I drop the trailer hitch onto the ball and Larry pulls ahead.  There are a couple of loud cracks, and that is when we both realize that we forgot to undo the rope that was holding the Costco shelter over our travel trailer from blowing away.
A few weeks ago I had been home alone, and we had gale force winds.  They were coming from the southeast, which is unusual for us.  Despite the shelter being bolted to some supports, it was really moving around, and I was worried that it was going to self destruct.  I tied a rope to the top front corner and then to the nearest thing that was in the direction the wind was coming from.  That just happened to be the heavy old utility trailer. 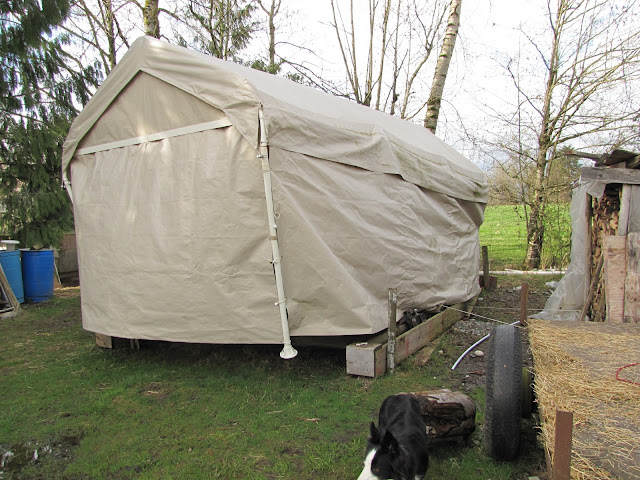 We had raised the canopy up to fit over the travel trailer by putting it on those up ended 2 x10s.
Believe me when I say it is a big mess, much worse than the picture shows.  That front pole and the back pole are now bent backwards, the tarp had eyelets ripped out of it.  It looks like we are going to have to take the whole thing apart to try and straighten out the bent pieces.  The front pole used to be bolted to the top of the 2 x 10s.  There are still a couple of ropes tied from the bottom of the middle poles to the wood shed, but at least we won't be trying to drive the woodshed away.
We got back with the hay, and of course by this time it had started to rain.  The guy hadn't showed up yet, and he had said he was coming in 15 minutes and now an hour had passed.  We had brought an extra seven bales down, to be prepared for the next time he comes, so we loaded those into the shop. We threw a little tarp over the other seven still on the trailer.  The rain got heavier, and Larry decided he wanted to put the tractor away.  He also thought maybe the guy wasn't coming for the hay now that it was raining.  He unloaded the other hay into the shop, put the tractor away, had just got into the house, and sure enough the guy drives in.
This afternoon when we were briefly blessed with some sunshine, I was at the front of the house trying to take my 365 picture.  I realized the gate driveway gate had blown open.  Larry had just been through it to take some garbage out to the garbage can, and he must not have closed it properly.
Luna was laid on the driveway.  She would look at me, then look down the driveway, then back at me, and then back down the driveway.  I knew right away what had happened, so we went to look.  Fortunately her soccer ball, which she seems to have the good sense not to follow when it rolls down the driveway to the road, had taken a left turn and gone in the ditch.  Usually it rolls straight across the road and into the ditch on the other side.  One time I was driving home and found it way down at the bottom of the dip in the road in the picture. 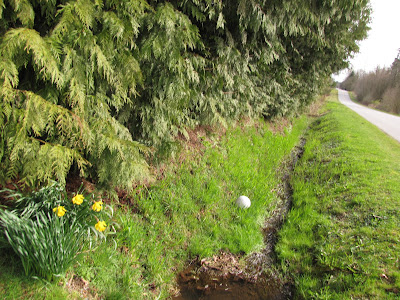 She didn't seem to have the urge to rescue it herself.  And then that big truck was coming, so it was a firm 'stay'. 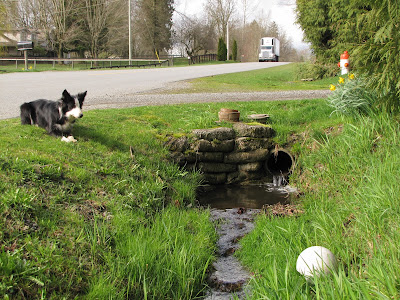 I thought you were going to get it for me 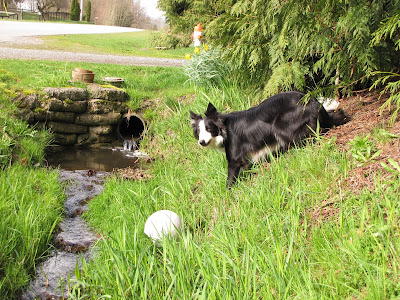 Then she got distracted
Never mind the ball, this grass is good.... 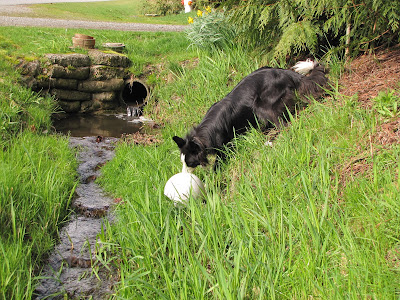 I need a Spring tonic 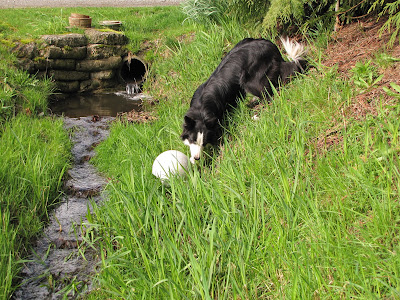 And I got distracted by the little water fall and 'stream'.  Zoom in enough and you can forget it is just water in a ditch running under our driveway.  Those aren't concrete bags, that's a romantic stone wall.... 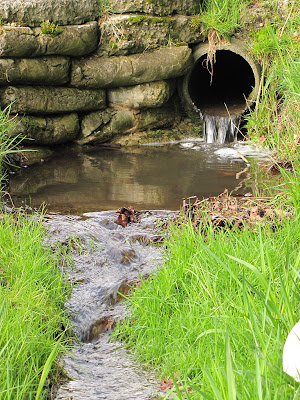 Okay, back with the program
I'll give the ball a push... 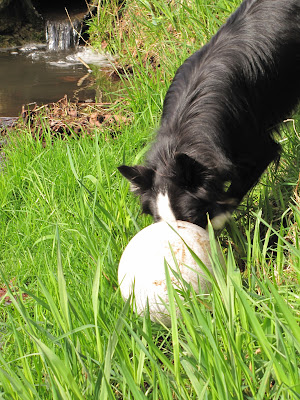 Whoa, it's floating down the stream 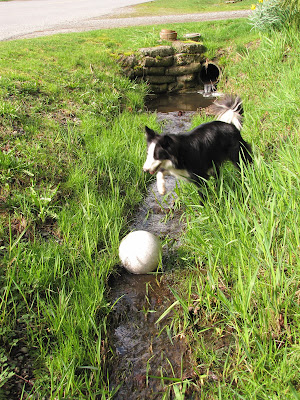 Maybe I'll have more luck from this side 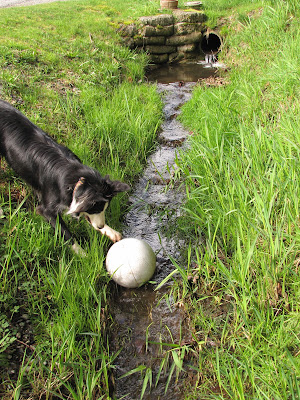 Here mum, it's right in front of you, can you get it out for me 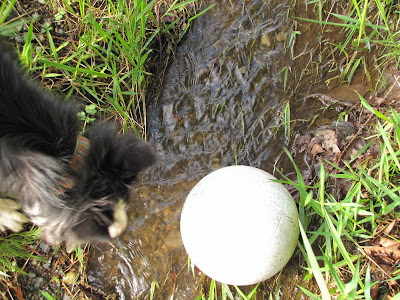 And we're back on the right side of the gate. 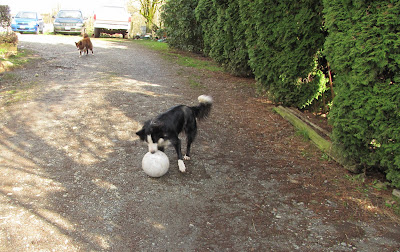 And the 'good' was that we actually saw the sun briefly today.
Posted by Karen at 12:53 AM