My sister in Ontario is raising a guide dog puppy.
I 'virtually' twisted Cathy's arm long and hard and got her to send me some pictures of Chance, as well as a bit of an update.
He has just turned four months old, and weighed 37 lbs a couple of weeks ago. He's not going to be a small Lab, that's for sure.  Right now he already weighs more than Jake or Luna.
Here he is having a wrestle with Dasher, one of his house mates.  Dasher reminds him occasionally who really is the boss. 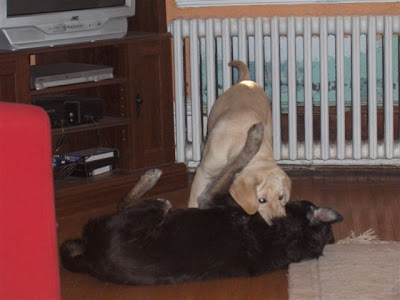 This is Leroy.  Chance is good with the cats, until they run, and then the chase is on.  I was thinking that he was doing really well for a Lab puppy, ignoring the food, but apparently those are all water bowls.
And I'm thinking, wouldn't it be easier to just have one big bowl of water?:) 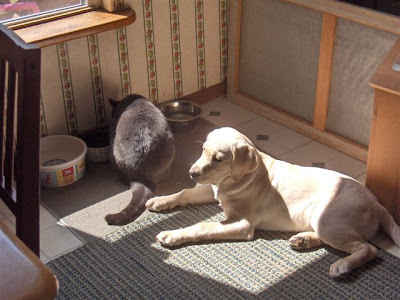 And like a typical puppy, he gets into things he shouldn't, and makes confetti out of them. 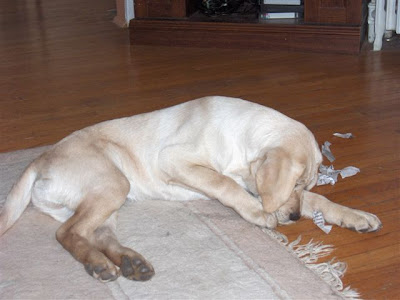 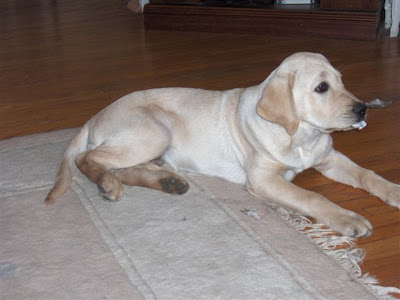 Here he is at the mall, Easter Monday. It had just opened, so at this point there weren't really any people there.  He was very attentive to Cathy though. 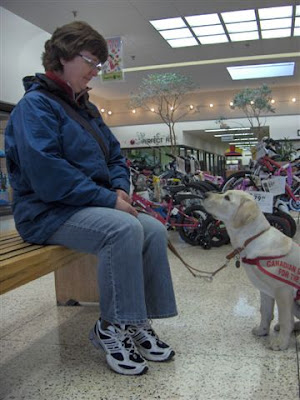 People are encouraged to pet him, but only when he doesn't have his vest on.  So if someone asks, and Cathy says yes, she has to take Chance's vest off.  The vest, which eventually will become a harness, is a signal to Chance that this is work time and not playtime. 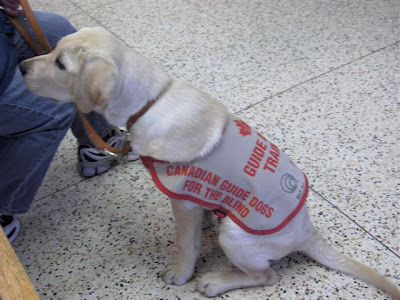 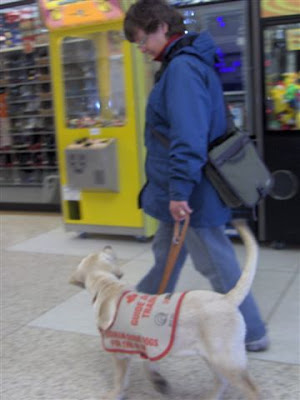 Chance is being taught to eliminate on command.  I think 'get busy' is the wording.  That's a handy thing for all dogs to know.  When he goes for a walk with his vest on, it is all business, and not the kind you stop and squat for.  He is suppose to do that before he leaves home, and then no sniffing and adding his contribution to the 'pee mail' when out walking.
Of course, since he's a puppy, that's still a work in progress.
Update:
The Puppy Walker Supervisor visited today, going for a walk down the street and to the mall with Cathy and Chance. Here's what Cathy said:
Oh, the supervisor came, we walked around the block and then drove to the mall and walked there and did the paperwork on a bench there. He was very impressed with Chance, he settled at the bench, walked well, on the leash, very attentive. He said that this is one pup you are proud to put the 'puppy in training' vest on. I felt good, he as much as said I was doing great.
Good job you two!
Canadian Guide Dogs For The Blind Walk 2011
Posted by Karen at 11:49 AM