My sister visited from the great frozen land in eastern Canada.  For them this is a winter to remember, or more likely they'd just rather forget it. Ontario has been under an Extreme Cold Warning, for what seems like weeks now.  She felt like she had come to Florida here on the west coast. The first daffodils are blooming, as well as some forsythia. Spring is getting an early start. It rained one day, and was cloudy for a couple,  but we had 3 days of sunshine when she got here, and another three days before she left.  She joined us in our Whole 30 eating plan, and is looking forward to great changes. She left yesterday, having completed 9 days of healthy eating.  I talked to her today, she said she is missing her chef (me), but had a roast in the crock pot and was oven roasting some vegetables.  Supper is taken care of for her, with leftovers for tomorrow.

We didn't do anything really exciting, although we did visit a lot of thrift stores, and I guess for us, that IS exciting! We also took Jake and Luna to a self serve dog wash at the local pet store.  First time I've ever paid money to clean our dogs, but for $10 a dog, it was well worth it.  Just nice to not have to kneel on the bathroom floor and lean over the tub.  Everything was included, waterproof aprons, grooming tools, towels, shampoo and a big dryer.  We passed up on the dryer as I knew it would freak Jake out.  I'll definitely go there again. 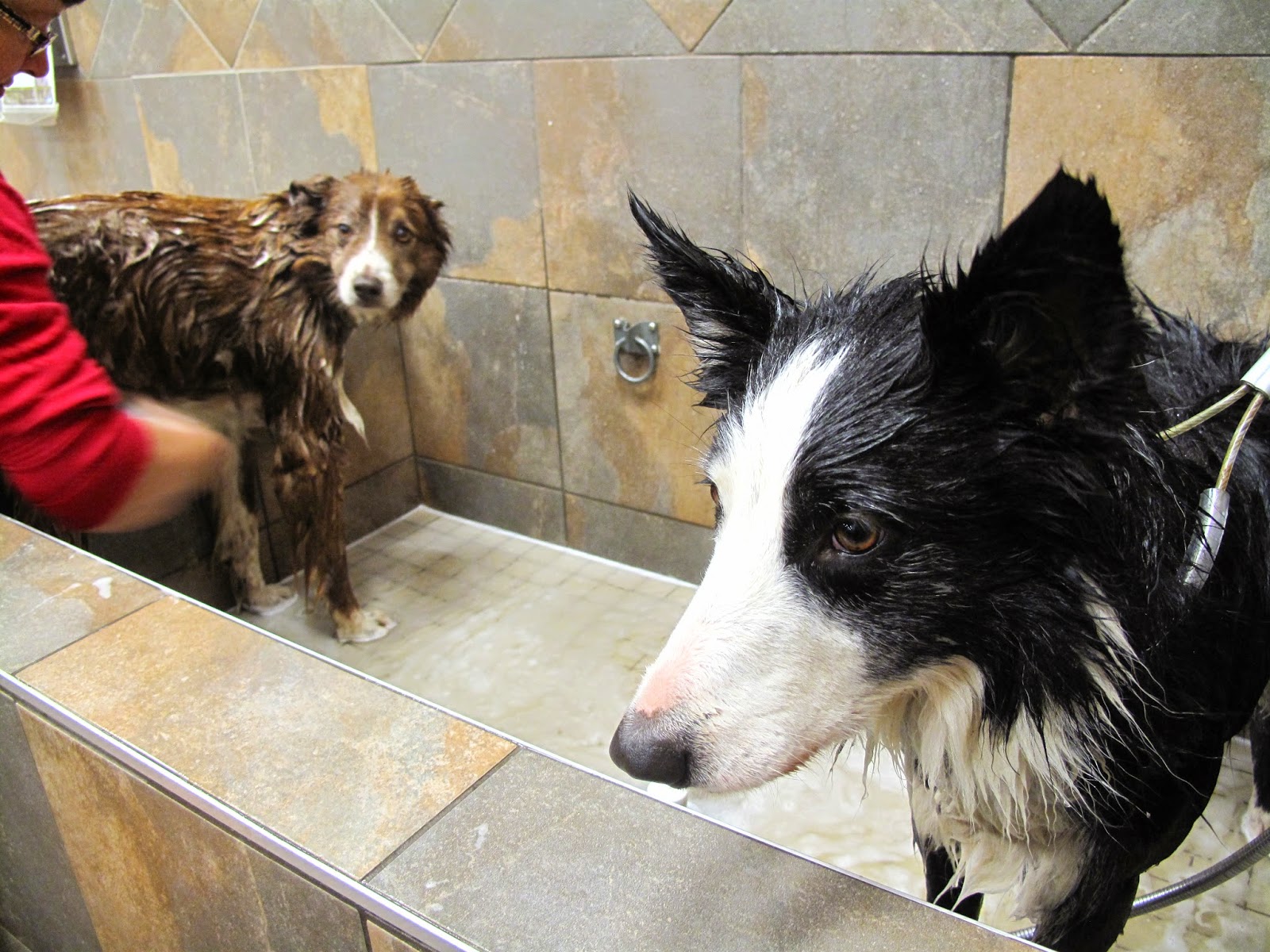 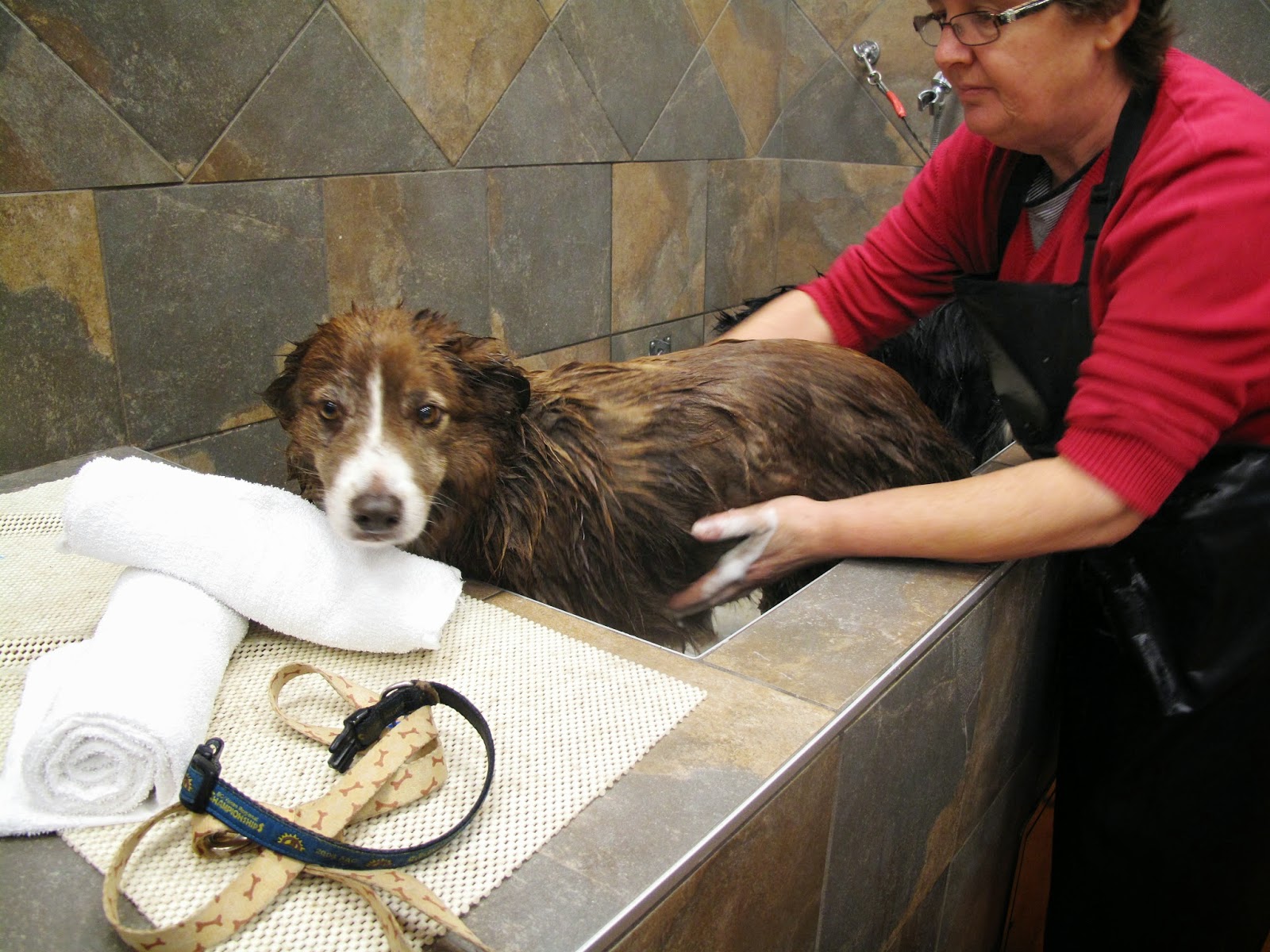 One of the 'red sky at morning, sailor take warning' sunrises. 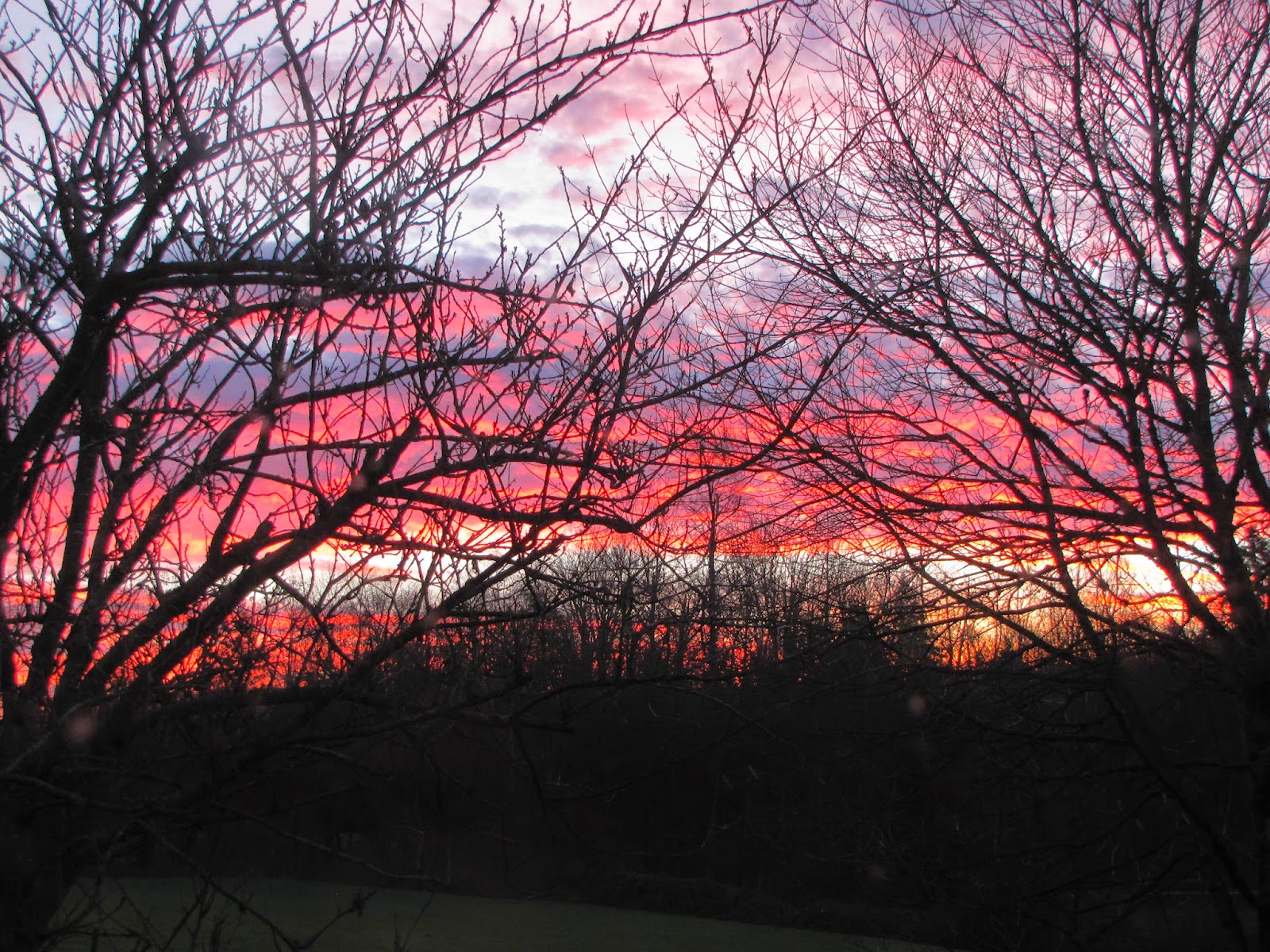 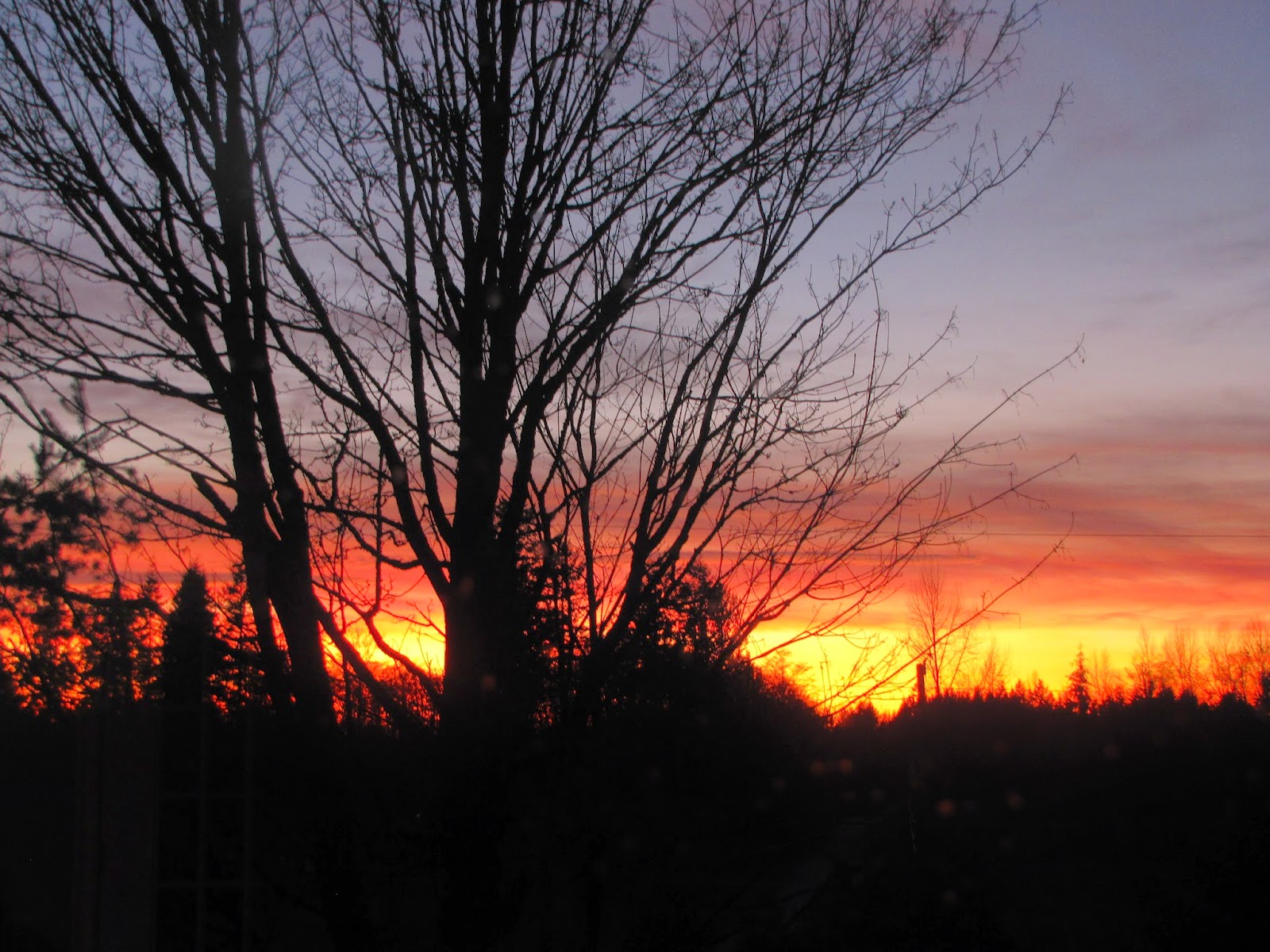 Cathy brought a present for Meredith, a late birthday present.  It was the tea set she had won in the silent auction in a Brockville thrift store, when we were in Ontario last November. The only thing was that she didn't know she had won it until we were back home, so Cathy had to drive half an hour to pick it up, and then pack it carefully in her carry-on luggage when she flew out here. 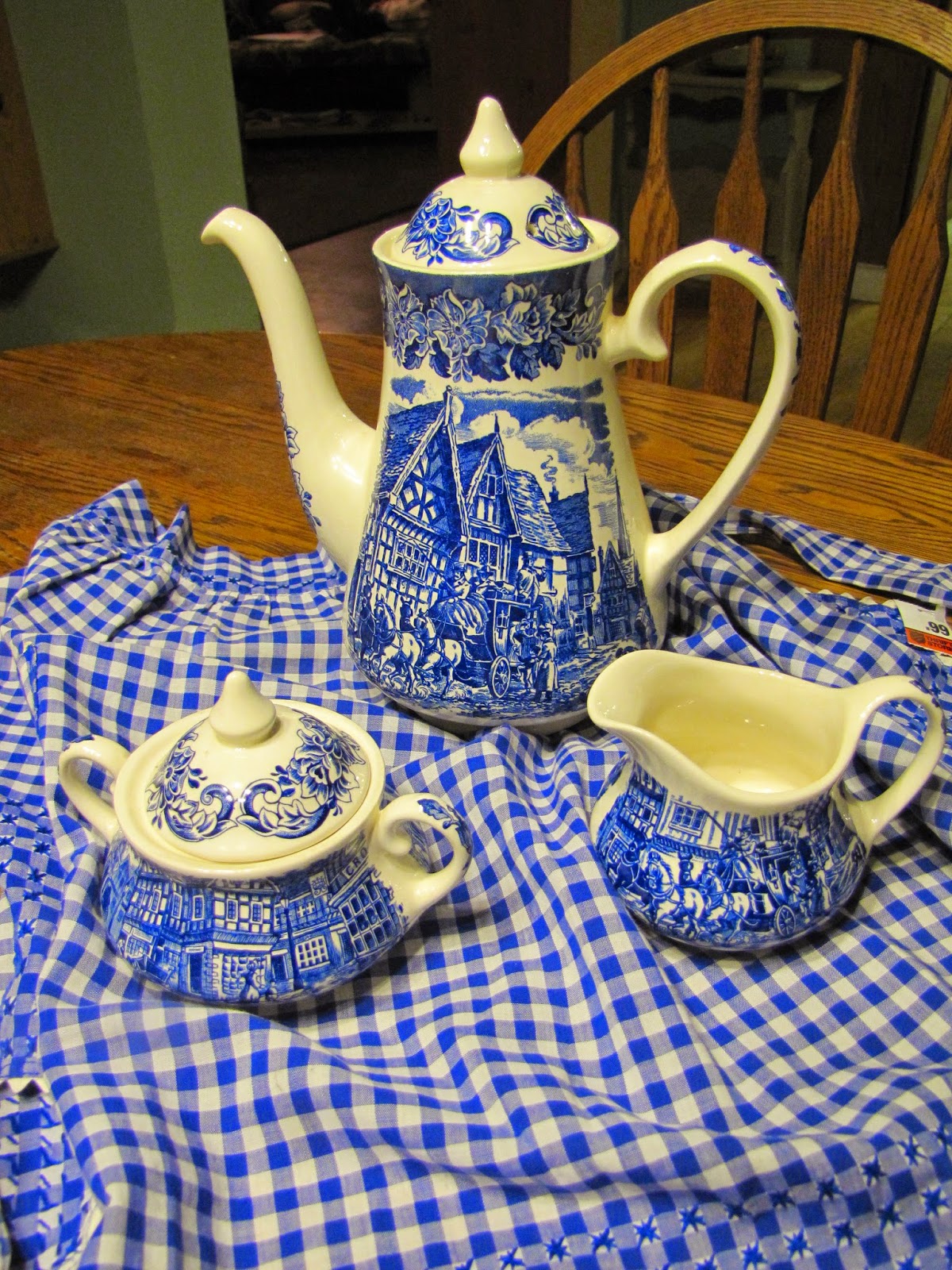 At the thrift store I found a cute half apron, which some one had embroidered with starbursts to make a border all the way around, and it matched the china perfectly.  It was 99 cents, but linens were half price that day:)

And since it is now marmalade season, I'm doing a lot of this. 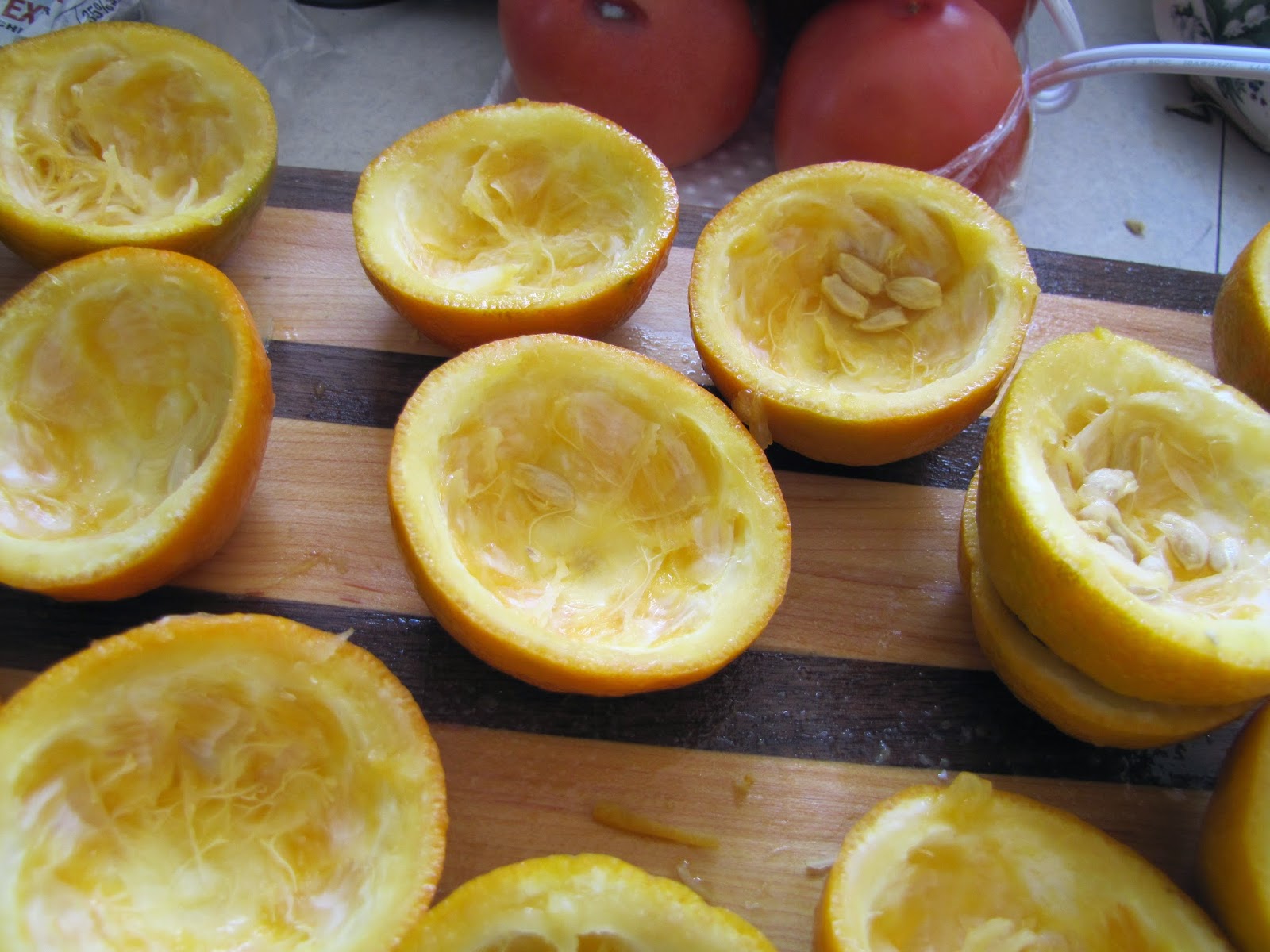 It takes about 14 Seville oranges for a batch of marmalade.  The oranges are smaller this year, for some reason.  Since I make 10 batches over the year, that is a whole lot of oranges to juice during the short time that the oranges are in season.

A few weeks ago I was buying veggies as well as marmalade oranges.  Not far away from my favourite veggie place is the Salvation Army thrift store.  It's not out of the way for me to go there, so I usually stop in.  You just never know what you might find!
I've seen these citrus juicers before, and wondered why anyone would bother to drag something like that out of the cupboard to juice a few oranges, and then have to clean the darn thing after.  This time I had just bought marmalade oranges, enough for three batches.  The brain kicked in at the right time, and while I was looking at this gadget, brand new in it's box complete with instructions, for a whole $3.99, it occurred to me it might just be the thing for those marmalade oranges, and might save my wrist from some twisting and turning.  Hot damn, the thing is awesome!

28 orange halves done in a couple of minutes!

As you may have guessed, we've been away at Oliver for a week and a half.  It had been three months since we were there, so it was nice to go and find everything okay.

I wanted to give you an update on that food plan that I started on January 1st.  Remember all the colourful meals I showed you?  Well this is day 41 of no sugar or sweeteners, no grains (which would include pasta of course as well as rice and similar things), no dairy other than ghee or clarified butter (which has the milk proteins removed), no legumes, no soy, no alcohol.  We have removed most foods that cause inflammation in the body.  I'm loving what I'm eating, we eat three meals a day with mostly no snacks.  We are well on the way to,  or already have retrained our brains to not crave that sugary or salty snack.  Is it hard, no, not at all.  I met a friend who is on the same program, and after we had bought our produce one day, we went across the road to Tim Hortons and had a cup of tea and a good chat.  Standing in front of the donut case didn't bother us in the least, we had no urge to have one.

So what do we (Larry joined in five days after I started) eat you ask?  We eat some protein at each meal. Eggs, fish, beef, pork, lamb, chicken, turkey, bison etc.  We have some fat or oil.  The rest of the plate is filled with vegetables and maybe a bit of fruit.  Nuts and nut butter are allowed, but no peanut butter.  Peanuts are legumes.

These were my meals on January 26th.
Tuna patties made with sweet potatoes, onion, egg, tuna and any other added vegetables. Left over salad, plus avocado and cherry tomatoes 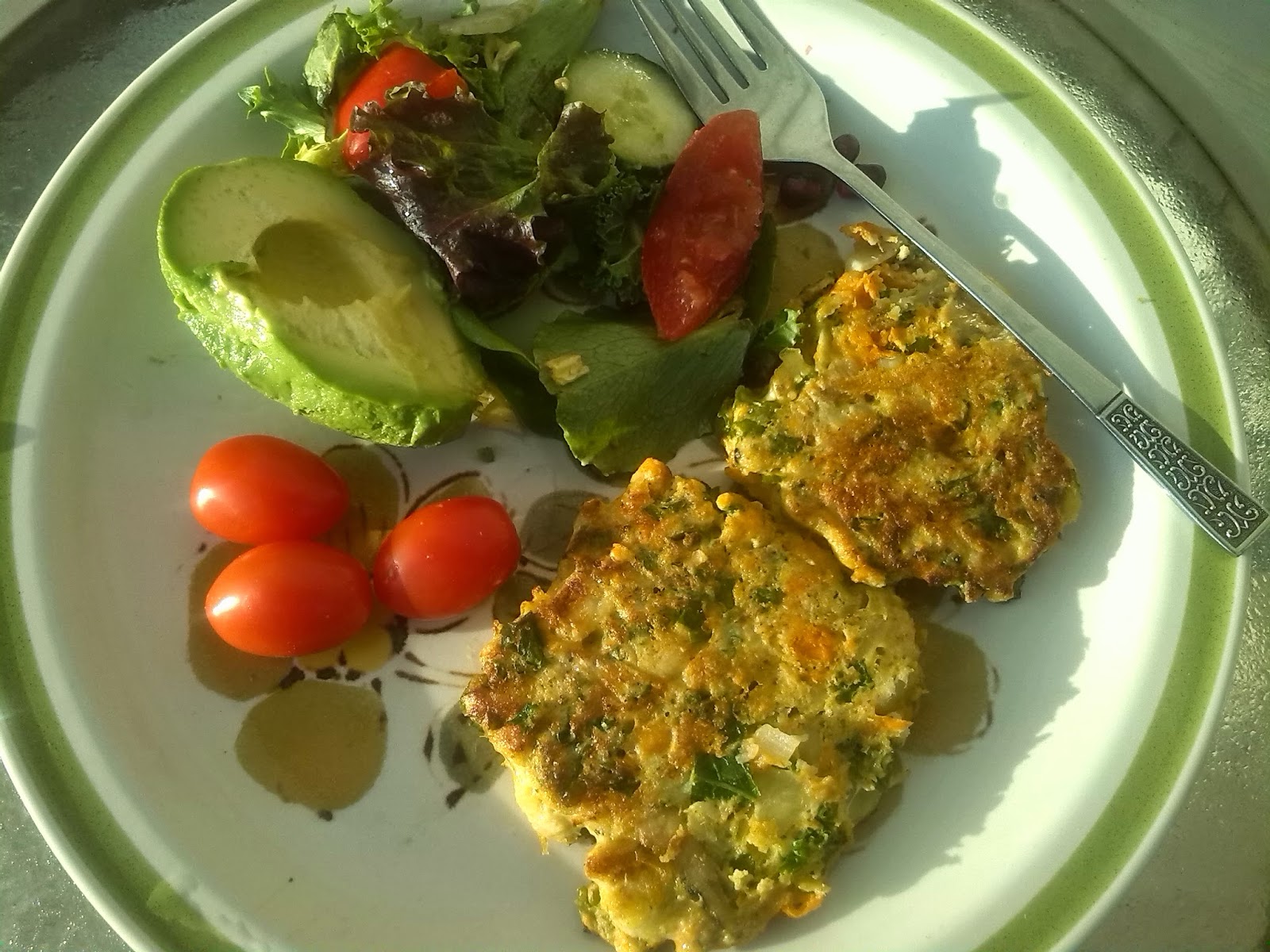 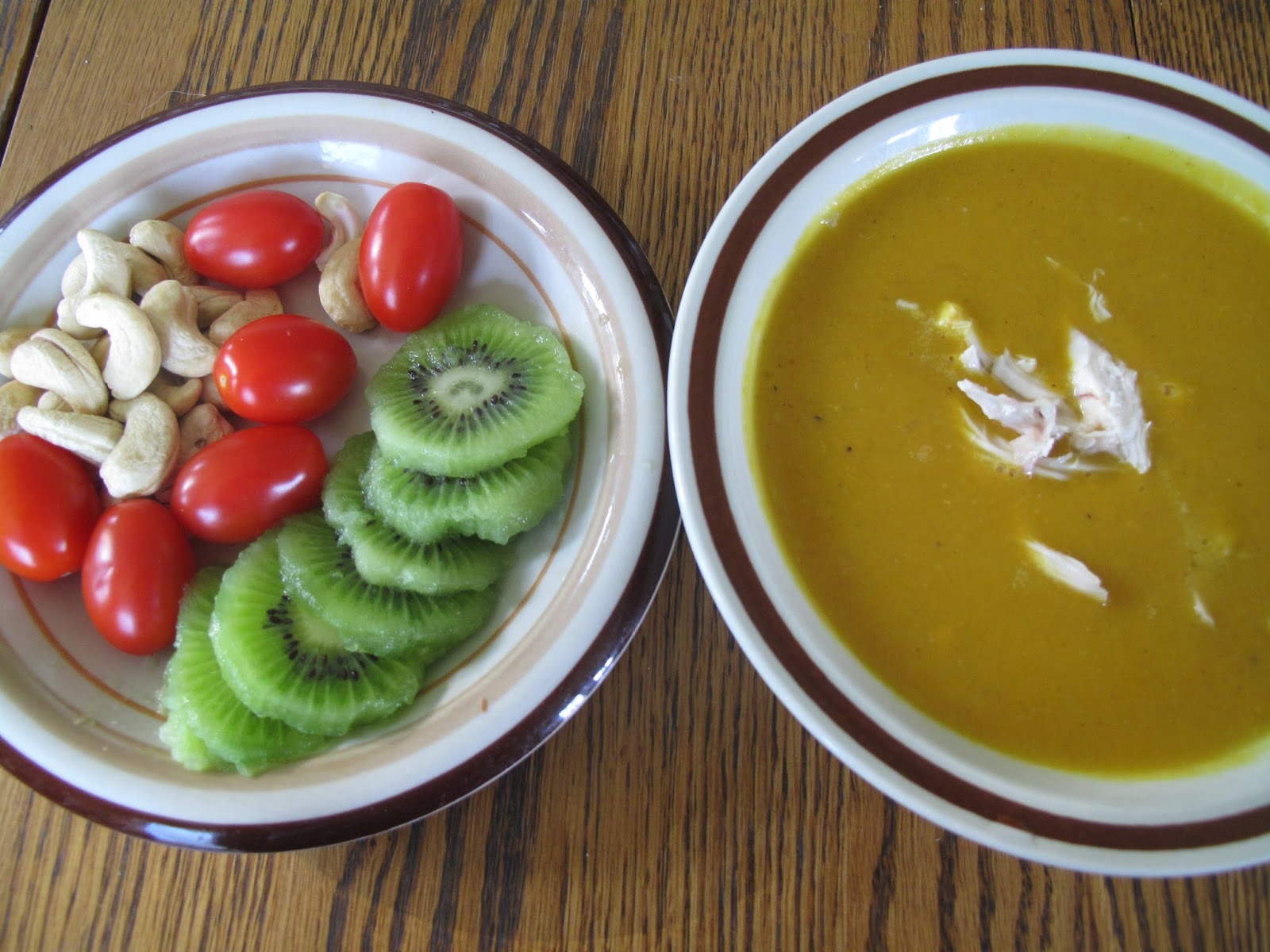 Leftover chicken stew with a multitude of vegetables on cauliflower rice. 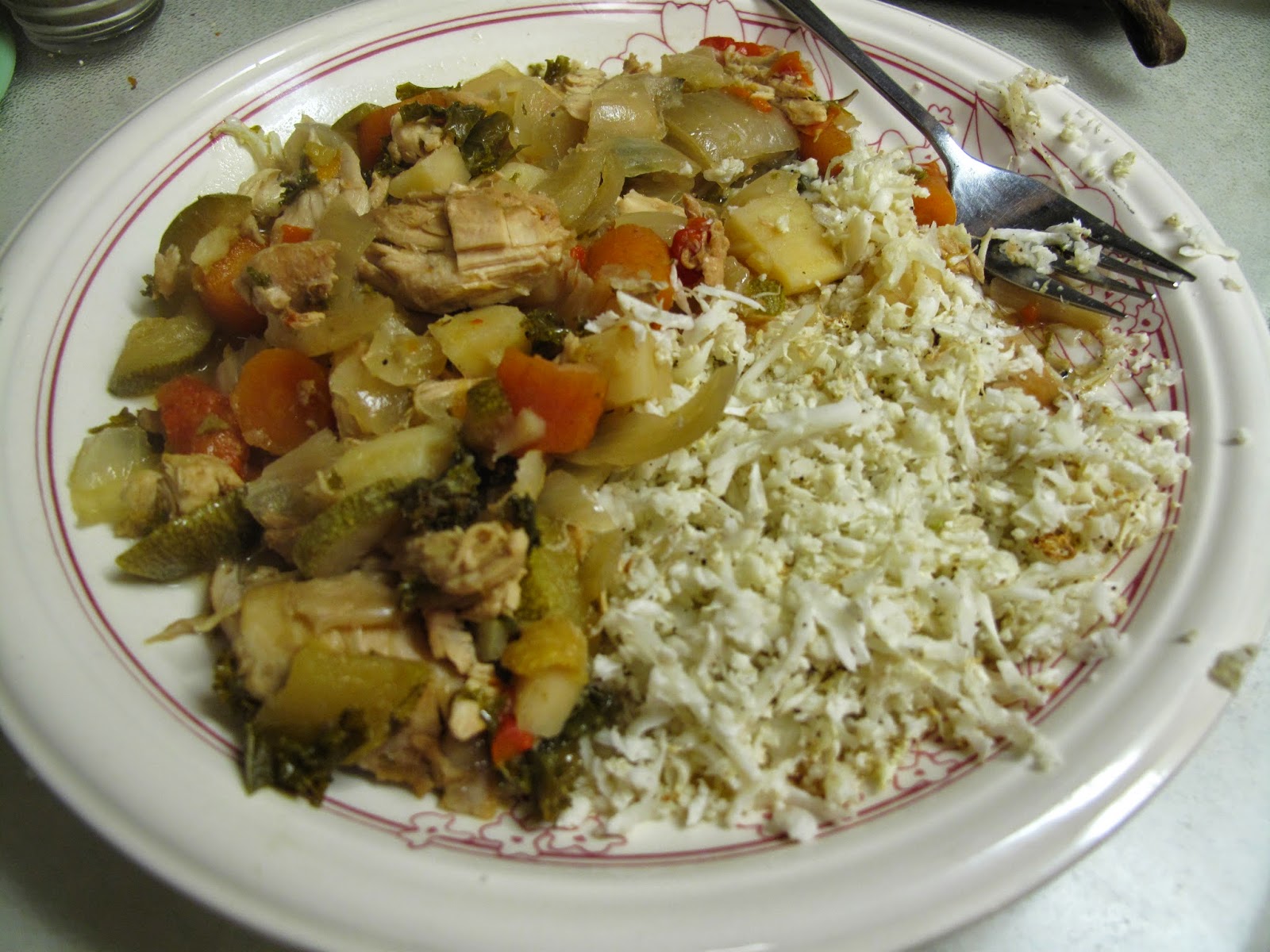 Our blood sugar is good.  No big highs or lows, no feelings of being desperate to shove something into my mouth.  It's not hard to make it from one meal to the next.  If I get a slight niggling feeling of hunger, I have a cup of water or tea or coffee and that does the trick.  I found that I can drink black, cold brewed coffee.  In fact it tastes just as good as the coffee with 1% milk I used to drink, and I don't get the bitter aftertaste.  Everything just tastes BETTER!  I have had improvements in a lot of small issues.  Most of the stiffness after sitting down for a while is gone.  The tightness I'd feel in my feet in the same situation is gone.  Some minor swelling I'd get in my lower legs is gone.  Swelling that has been there for years in my lower left thumb is gone.  Muscle soreness in my left hip that ran down to my left knee is gone.  More energy! I wish I could say I'm sleeping better, but unfortunately not much change there.  Less gas:)  There is no calorie counting or limits on amounts, within reason.  Obviously if you stuffed yourself full of nuts or nut butters, or white or sweet potatoes, or too much fruit, you wouldn't lose much weight.  I'm down 12 pounds.  The easiest 12 pounds I've ever lost.  I haven't knowingly cheated in 41 days.  I'm in no rush to add anything back at this point.

This isn't quite the fountain of youth, but I feel like I've made a lot of positive moves to improve my health and remove a lot of inflammation from my body.  I'm continuing on.  I wish I'd done this 20 years ago. Larry keeps mentioning about adding things back in, but he hasn't yet.  I am making a point of trying new fruits and vegetables.  The other day I bought plantain, jicama and dragonfruit.  We ate the dragonfruit at lunch.  It reminded me a bit of kiwi fruit, but I liked it better.  Sunday and today I used the plantain to make tortillas.  I just found out that jicama is the root of a legume, but it is okay because the part of the legume we are trying to avoid is the seed. I've now tried the jicama raw.  Oh wow, love it!  Many of you have probably heard of the Paleo diet.  That is generally what we are eating.
Lots more info here www.whole30.com.
It is life changing. 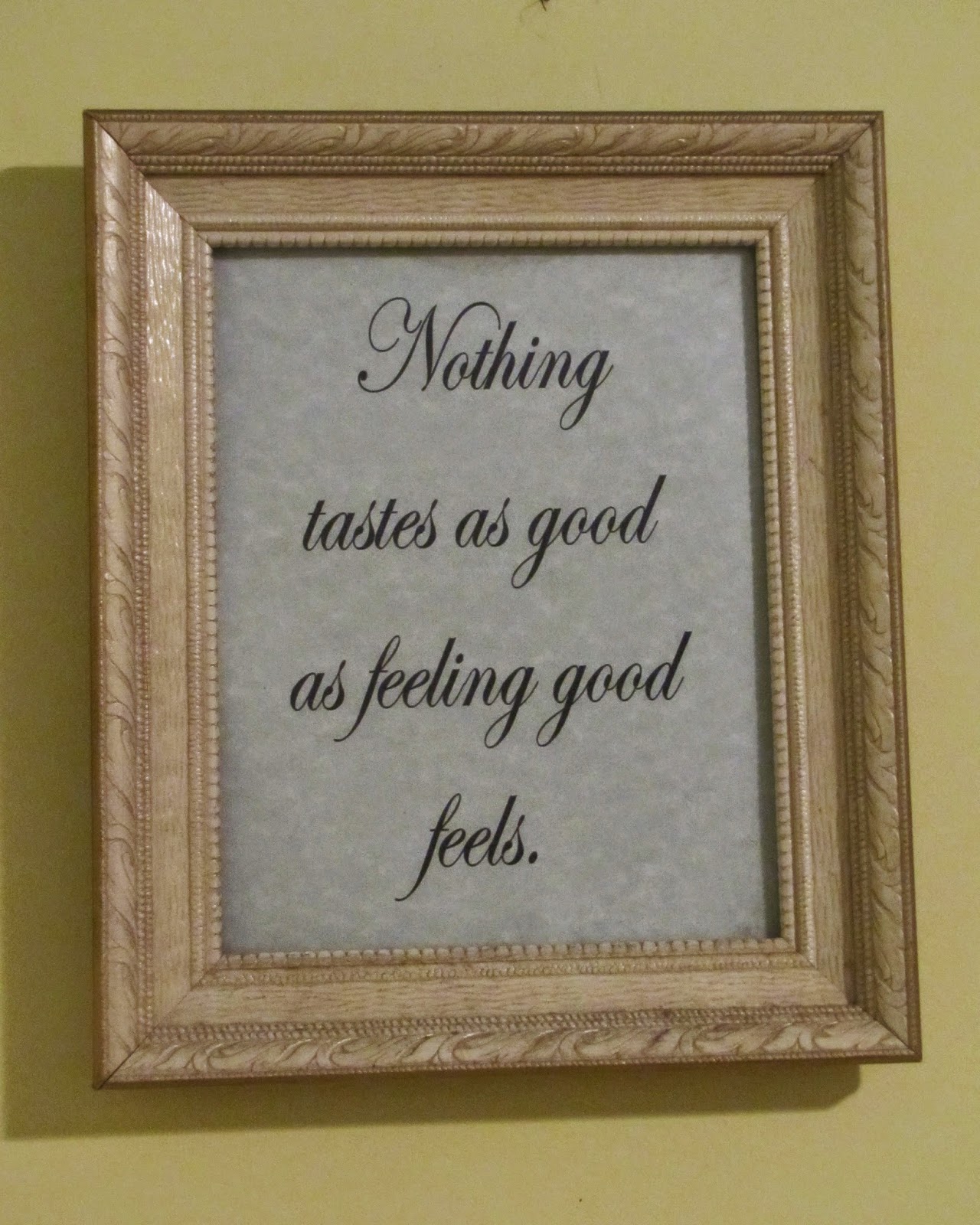