Where has the time gone!  I started this blog with great enthusiasm nine years ago.  The enthusiasm has certainly waned over the last few years, and this year it was pretty pathetic.  I thought I could do a brief recap of some of the things that happened in 2018, just to prove that we didn't actually fall off the edge of the earth.

Larry and I, Christmas Day 2018, during an afternoon walk around Mill Lake in Abbotsford.  We had gone to lunch at Meredith's.  Our Christmas dinner was on Boxing Day when we could be all together, as David and Melissa were at her parents on Chrismas Day.  A very relaxing Christmas Day, we kind of liked it that way. 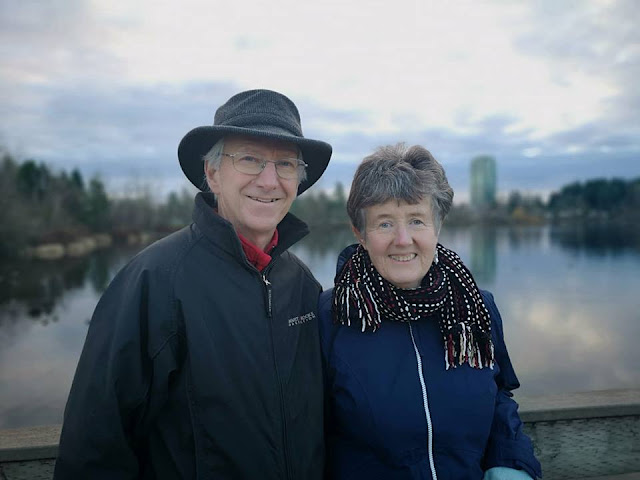 Our annual photo.  I aim to take a different one each year.  Last year we had the massive tree hanging over our driveway, courtesy of the ice storm.  This year we had a bit of a post pounding party on Dec. 28.  Might as well take advantage of the younger muscles to replace a few fence posts.
Left to right... Meredith, me, David, Larry and David's significant other, Melissa.
Our dogs Jake and Luna, and David and Melissa's dogs, Chy(ene) and Tucker.  I had enough thrift store sourced rain gear to outfit the visitors!  No ice storms this Christmas, it was mild and wet. 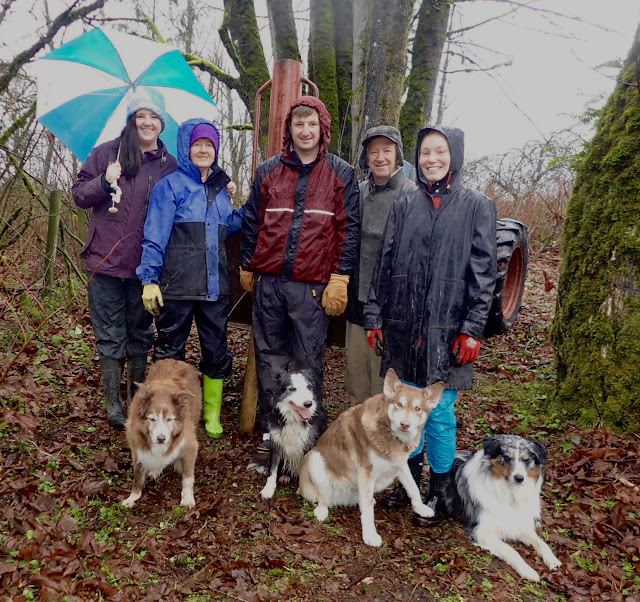 Our sweet Jake, at somewhere around 14 1/2 years old, is showing signs of some Canine Cognitive Dysfunction.  We had some weird nighttime barking happening in the early Spring.  We finally figured out that his night vision was not good, and once we left a lamp on and some night lights, he was okay.  In August he had an odd event, and then some lesser similar ones a couple of months later.       I did decide that they were probably some sort of seizures.  He also has a perianal adenoma under his tail.  He has been to the vet a couple of times about these things, but I don't think this vet is going to be a huge help with the doggy dementia.  I've joined a group on Facebook and from what I see there, every dog is different, and a different cocktail of drugs and supplements may or may not work for each one.  He also showed signs of anxiety in the evenings, and being unable to settle.  One day I happened to read something in the Tumeric User Group on Facebook.  Sundowner Syndrome was mentioned, I looked it up, and there were Jake's symptoms all laid out in front of me.  He seems pretty stable right now.  I've added an Omega 3 supplement, he was already getting turmeric Golden Paste.  I've bumped that up and am giving it to him four times a day (when I remember) with a small add on of a curcumin supplement.  I've added in a bit of CBD oil.  He settles well in the evening, most days. One day at a time. 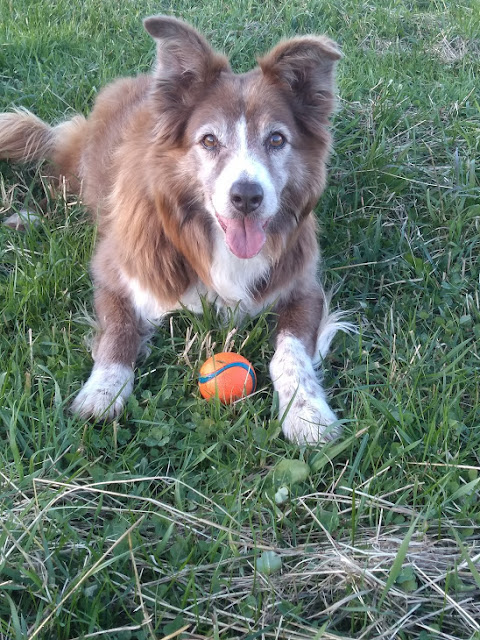 I grew lots of veggies again this year.  Some successes, some failures.  I failed to get a proper roof over my tomatoes, and they fell to the usual viruses that hit tomatoes here in the late summer.  They need to be protected from the rains at that time of the year.  This year was a bumper crop for fruit, so we had lots of pears and apples to sell, as well as plums and a few raspberries and blueberries.
Our winter has been very mild so far, so I'm still picking things from the garden.  The carrots, broccoli and greens were picked just recently. 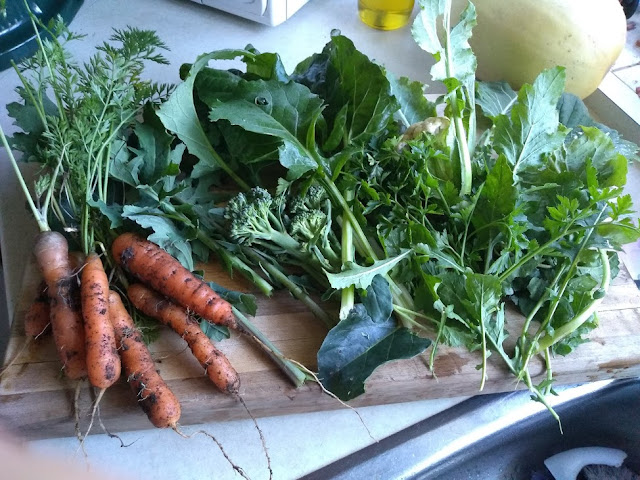 So, not long ago I had this post finished, all ready to hit publish.  I was working on the old laptop and it was giving me a bit of trouble.  I hit something wrong, after I thought it had saved the post, which hadn't happened.  So everything from here on down was lost.  I wanted to cry.  So probably a couple of more weeks has passed since then....


This was the year of Larry getting a hear aid.  I was probably happier about it than him.  At least I didn't have to repeat myself so often!  He was able to hear customers at the market much better, and he would definitely notice the difference if he didn't have it in.  Thankfully he only needed one in his left ear.
This is one recurring problem though.  The clear tube keeps turning red.  No one seems to be able to tell us why.  He is now on his third tube, and it is already 'pinking' up after just a week.  The hearing place is stumped. Anyone have any ideas? 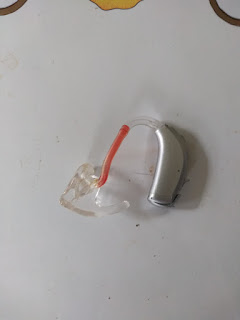 We started two things in 2018.  One of them was puzzles. It all started in the Spring when I picked up a free brand new puzzle at a garage sale.  When we put all the leaves in our dining room table, there is enough room for the puzzle at one end, us to eat, and leftover horizontal surface at the other end for piles of papers, lol.  We don't have a puzzle going all the time.  One was finished over Christmas when David and Meredith really got gungho and spent a lot of time working on it.  I just got another one out yesterday. 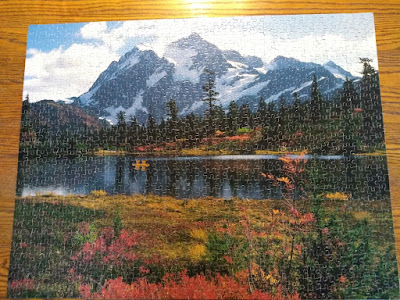 The other thing we started was square dancing.  Oh my! Never ever thought we'd be square dancers.  I remember my mum and dad going to square dancing when I was a kid, and we still have their square dancing badges.  January 2018 we took advantage of the three free lessons offered by our local club, and we were hooked!  So much fun, and quite a workout too.  I swore I'd never wear one of those big poufy skirts (much more poufy than in my parent's era).  I do like to wear a skirt, and I've got some pretty full skirts, but haven't taken the crinoline plunge just yet, although I'm close, very close, lol!  It's funny, I've talked to quite a few women that also swore that they were never going to wear one of 'those' skirts, and now they do.

Here's Larry front and centre at a demo our club did at a Christmas festival.  I'm there too, just a head visible between two other heads on the left. 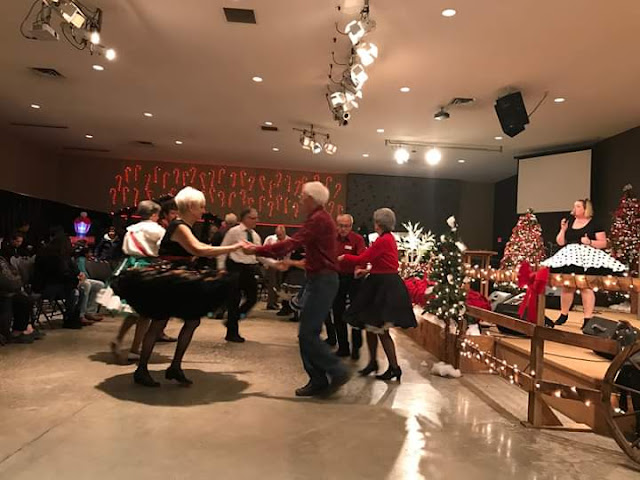 And then, after much thought, I made a big decision.  A huge decision, to mostly put an end to the market that has been a part of my life for 20 years.  Add another 6 or so years before that, that I did other markets, fairs, events.  I feel like I'm losing a part of myself to end it, but it's time to make time for other things.  I have admitted that I might still go to the market randomly, maybe once a month. It's the pressure of having to keep up production enough to put on a good show every week that I want to get away from.  I still don't know how this is all going to play out.  We shall see. 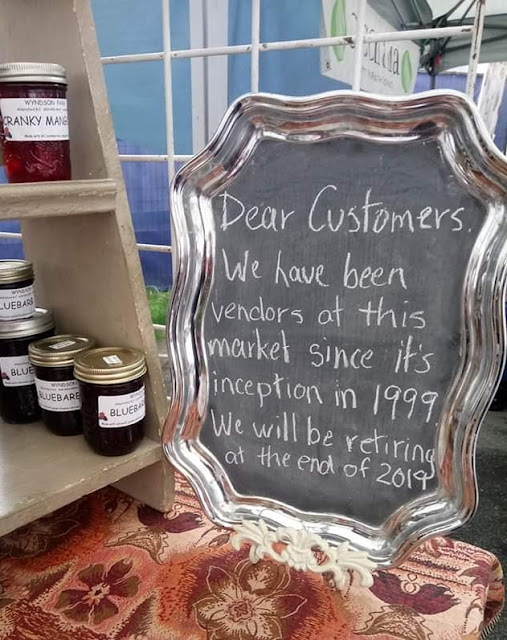 I have a massive amount of fabric, so have been putting some effort into getting some things sewn up.
Aprons, bags, bibs, tea cosies maybe, lap blankets,  all coming up I hope. I'm working on aprons at the moment.  Thirty six so far.

Our winter has been so mild, we've been able to work on outside stuff.  So much to do, not enough energy, or maybe not enough enthusiasm.
Better go out and clean out another chicken coop!