This is a weeping Pussy Willow tree.  Only one or two branches ever weep pussy willows.  So even in the Spring it is nothing much to look at. 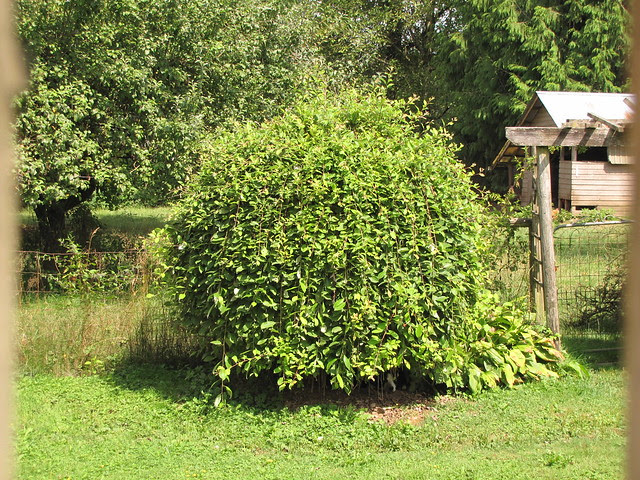 Luna doesn't care though.  It's perfect for her to dig a hole under and a good spot to hang out on a warm day, with it's view across the lawn towards the house, and the sheep and chickens are right behind her. 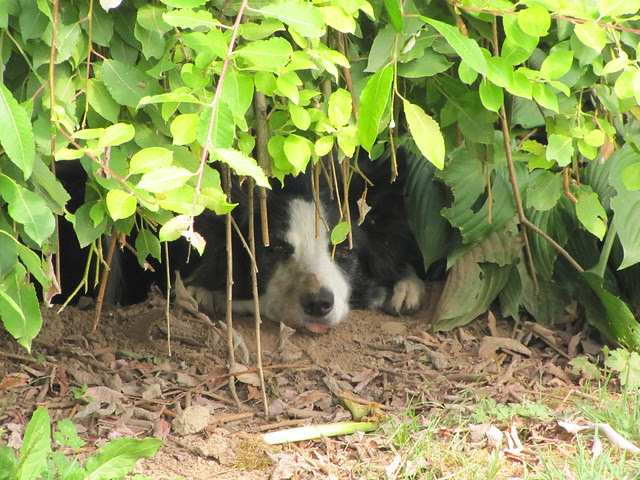 Our dogs have their favourite hidey holes where they like to hang out when it's warm, or they are warm, or they just want to be in a cool place.

Jakes, and sometimes Calli's, although they are never in there together, is in what used to be a garden with Astilbes.  I think the plants have been killed off, the ground is now hard packed. 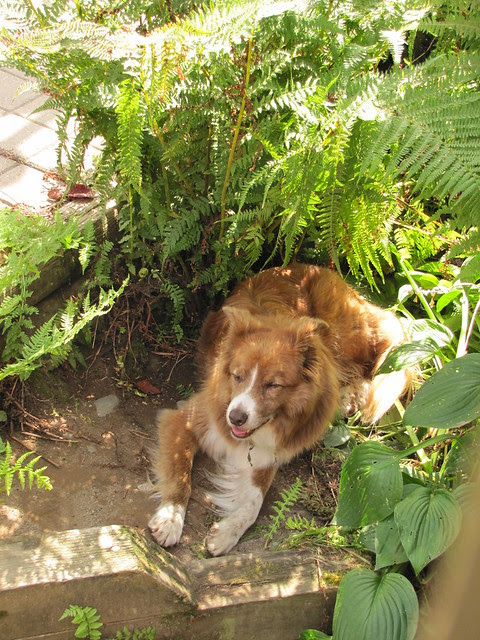 It is right next to the patio and the steps down to the door to the garage with it's fancy magnetic screen door. Nelson even pushed his way through that door today.  Calli mostly hangs around in the garage, hoping that the door to the basement will be open and unattended long enough for her to get in there and lay on her mat.  We are wise to her though, and don't let her in as much as she would like.  Figure there are many rainy winter days to come that she can hide away in there.  I'd rather she stay outside for at least some of the day while the weather is nice, where there is more mental and physical stimulation.  May I'm just mean.
Posted by Karen at 6:32 AM 6 comments:

More berries.  It's blackberry season now.  It probably started a couple of weeks ago.  Last week we started picking in earnest.  So far we have picked 15 ice cream pails full.  Those are 4 litre or roughly 1 gallon pails.  About 5-6 lbs in each pail, depending on how ripe they are when we pick them. (If they are really ripe, they tend to squish down more in the bucket, so we can get more in) 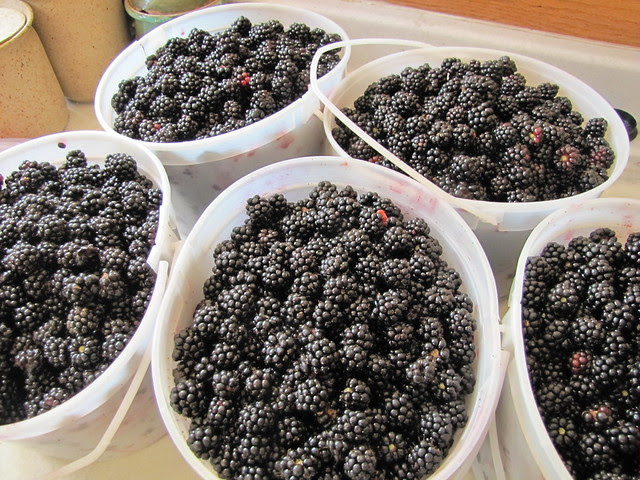 My hands, which look in rough shape most of the summer, are even worse now.  I have to remember to scrub them with some lemon juice before I go out in public, to reduce, in particular, the staining under and around the nails.  I don't always remember:(  So then I am doing kind of weird things with my hands to try hide what looks like plain old dirt from the public eye. 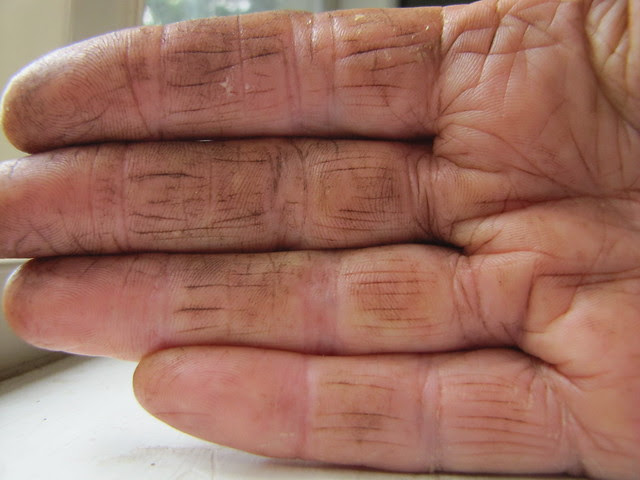 We also pick some to take to the farmers markets.  We advertise them as 'not roadside', and people ask where we pick them.  I always tell them that if we didn't keep cutting the blackberries back each year, our ten acres would soon be just be one big blackberry patch.  As it is, the blackberries are slowly winning.

This last trip to Oliver was a bonanza in the wild berry department.   When we headed out on the Tuesday, we knew we were in for a hot week.  We were in the car, and it doesn't have air conditioning.  The temperature wasn't too bad when we left home, but by the time we reached Princeton it would have been 30+ C.  The plan was to stop there for a bit of late lunch, and take the dogs to the river for a swim, which we did.  But I just happened to notice that there were a ton of Saskatoon berry bushes right close to where we parked.  So when we got back to the shaded car, Larry waited there with the dogs, and I went back out into the heat and picked some berries.  Got a few cups, but it was slow picking, and it was hot, and we really needed to keep going.

We got to Oliver about suppertime.  The next morning we went out for a decent bike ride, along through the orchards and vineyards, and then crossed the highway and rode north up the Hike and Bike trail along the river back towards town.  I was on the lookout.  We saw some of these, but I didn't know what they were. 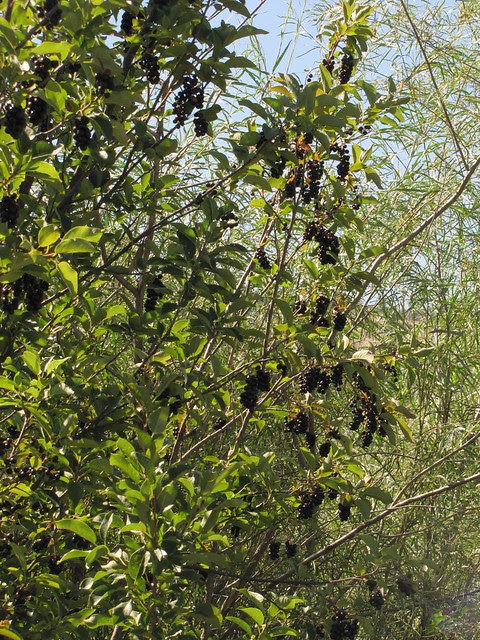 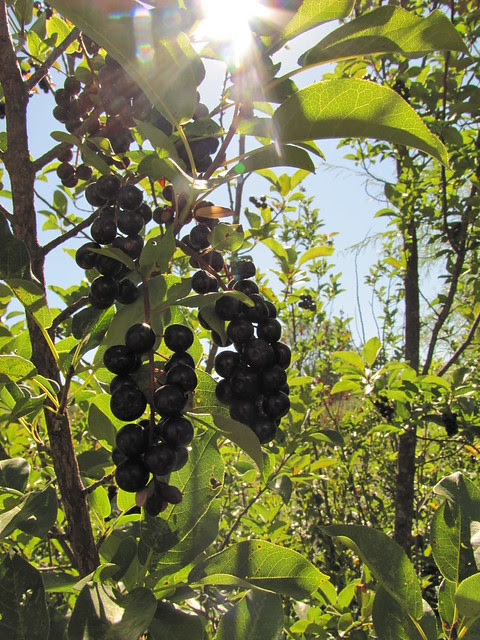 Took a sample with us and stopped at the tourist info.  They are most helpful and friendly there.  Neither of the women knew what they were, but they did have a book and we were able to figure out that they were chokecherries.  That made me kind of excited:)  We had also spotted a mother-lode of Oregon Grape bushes, although in one spot they were firmly protected by a phalanx of poison ivy.  So we decided that we'd head back and pick some of that bounty when it was cooler.

We headed out the next morning, when it wasn't really any cooler, with buckets and bags.  We picked four buckets of the Choke Cherries, three of Oregon Grape, and I spotted a bush of Golden Currants that I had somehow missed the day before, so we got a bucket of those as well.  I think Larry thought he was going golfing. 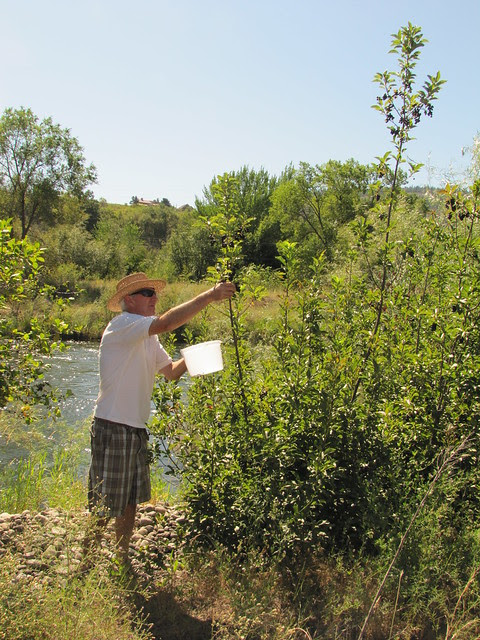 Forty pounds of berries in total. 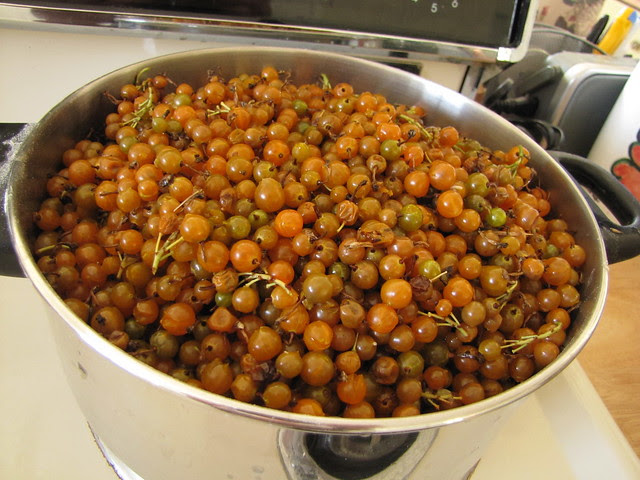 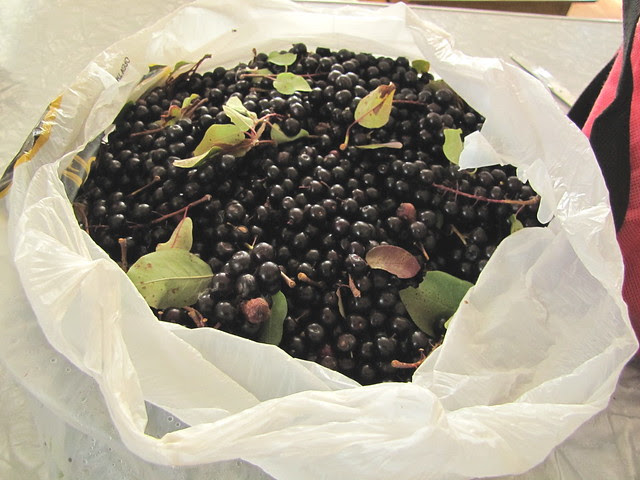 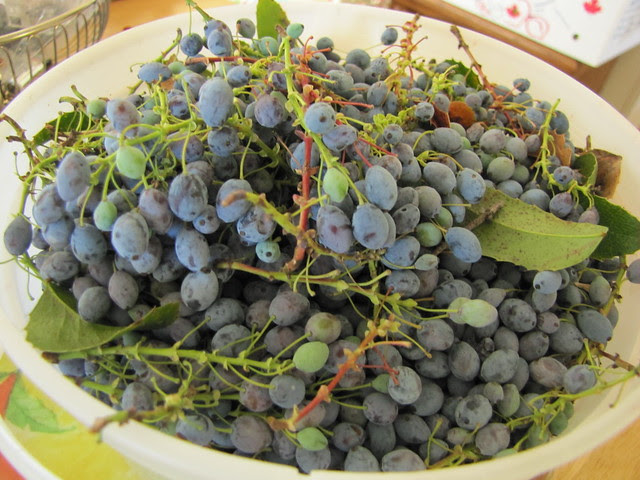 I got them all cleaned, washed, bagged and into the freezer.  We also did the same thing with 40 lbs of cherries, except they had to be pitted as well.  Blanched and peeled 25 lbs of peaches, and made another 5lbs into jam.  Lots more peaches yet to come. 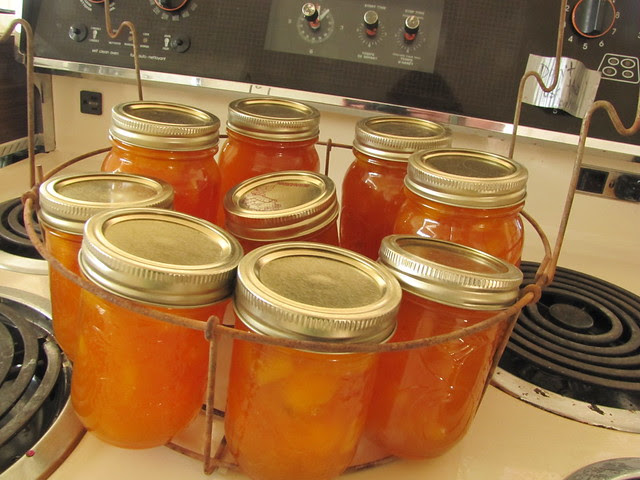