You may be wondering what happened to me over the last month and a half.  Then again, you may not.  Either way, I'm back!  Way back in June, things just got really busy, and blogging went by the wayside.  I was flying to Ontario on June 19, so there was the last minute panic of trying to get all those things done that had been put off, procrastinated about, ignored, etc.

Things got sad too.  All of a sudden, Calli, the wonder dog, was not doing well and went downhill.  I'm sorry to say that Larry had the unenviable job of taking her for her last visit to the vet on June 20.  The appointment had been made a few days before, so I was able to say my goodbyes to her on Sunday before heading to the market and then the airport.  She had lived a wonderful long life of 16 years, 4 months and 25 days.  A long life for any dog, and more so for her.  She was a real trouper! I like to think of her running on four legs now, chasing her orange ball. She loved those orange street hockey balls...and she loved (when she was still able) to carry shoes to her bed and pile them up to make a pillow for her head. 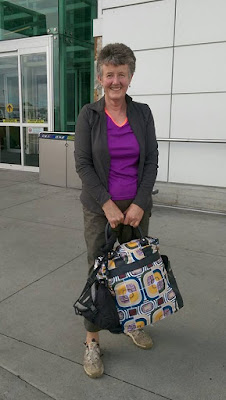 So I flew to Ontario to my sister's.  Quite a while back she said she wanted to do something different, so she was going to drive to B.C. this summer.  I didn't have to think about it too long, 'Roadtrip!' I thought, and said I would fly out and drive back with her.  We decided that 'to heck' with trying to stop at a whole bunch of tourist traps, we were going to Thrift Shop our way across Canada.  And we did! And we camped and slept in a tent.  I was determined to travel light, so only took a few clothing options with me on the plane, considering that it was Summer.  In that bag (a 50 cent garage sale buy) I had a sleeping bag and my usual bed pillow, a few changes of clothes, a coffee mug, toiletries, another pair of shoes and a few other odds and ends.  I had fun seeing how much I could fit in there.  I used big plastic bags that were designed to have the air sucked out of them, the dollar store had them, and they worked wonderfully well.  We did have a great time, we called ourselves Thelma and Louise.  Not really appropriate, as we had so much fun, a lot of laughs, but they were the first names that came to mind.  Neither us could remember seeing the movie, so weren't sure of the story line until we looked it up.  Cathy has since watched the video, and said we should have called ourselves Laverne and Shirley instead. We will have a name change for the next trip! Maybe in the Fall....
Oh yes, and we have been without a computer for the last two weeks.  So now Cathy has made it three for three.  There has been a major weather event the last three times she has been here, which resulted in damage of some sort.  This time it was a gigantic thunderstorm.  It happened the night we got here.  We don't get a lot of thunderstorms here, and it's always a bit exciting when we do.  This one just seemed to be right over top of us, and went on and on, and there was one massive crash near the end and I expected to look out and see the Apocalypse. Nothing.  The only thing was that in the morning the computer was dead.  And there was no internet.  We did find out that our carrier was having issues in the area and then I phoned them near the end of the day.  Apparently the internet was back up and running, except at our house.  Turns out our modem was faulty, and we managed to get it replaced the next day.  The technician poo pooed the idea that it was anything to do with the thunderstorm, but he didn't know that our neighbours had to get their same modem replaced as well.  The computer was not revivable, it was old and not running well anyway, so a new one was in the works.  That meant making a decision, and I put that off as long as I could, but I needed to make labels for the jam....so we finally had to get one.  And it has Windows 10, which is just that bit different to make things awkward, and neither of us are anywhere close to being a computer geek....and sometimes I just want to scream and smash my fist into the screen.  Oh, and by the way, both modem and computer were plugged into a good surge protector... go figure!

So there you have it.  All my excuses for disappearing.
Here's a couple of photos from our trip.  The moose was in Dryden, Ontario.  The only moose we saw. 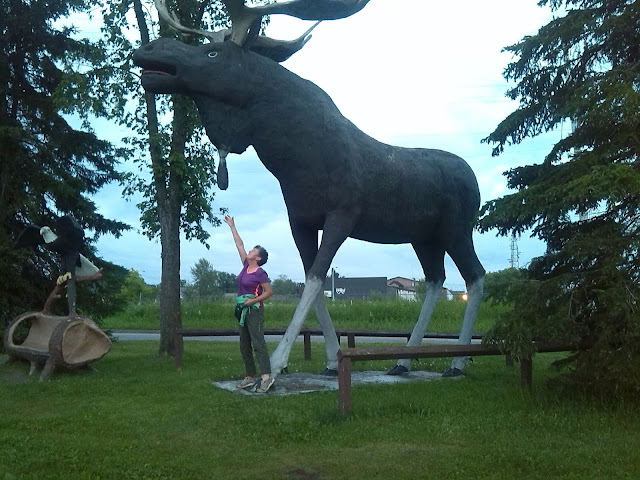 A thunder storm moving in at sunset in Medicine Hat, Alberta 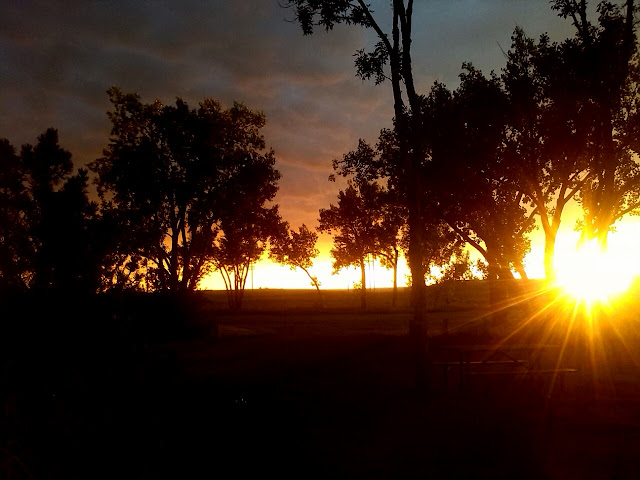 Hopefully I'll be a good blogger and talk to you again soon!