The IKEA closets are all up and running now.  We really like them.  After we figured out a better way to put them up, things went pretty well.  We liked how everything fits together so nicely, and for the most part it was fun building it.  It's amazing what we can fit in there, and there's still empty space.  We had an old 5' by 2' closet, a six drawer dresser, a tall four drawer dresser, and a long 6 drawer and 3 small drawer dresser of 'stuff'.  Plus there was some stuff piled on one of the dressers, on a couple of chairs, and on a bench.  I think I've mentioned before that horizontal surfaces are our demise.  Granted, as we were going through everything, we did fill up a few bags to send to the thrift store.   The dressers are now sitting empty in the garage.  We have two unmatched night tables left, and a pine bench/seat thing.  We'll probably end up with another bench thing at the end of the bed, and that will be it for horizontal surfaces.  The room looks a bit stark, but stark is good if it means there is a place for everything.  One door is a mirror.  We were actually going to go for two mirror doors, but that seemed too much.  We took it back and exchanged it for a wood door. 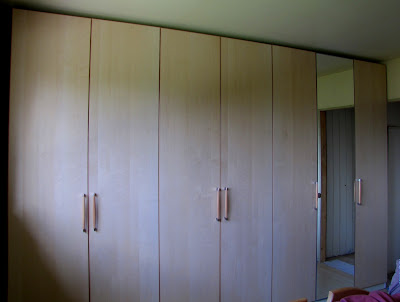 Lots of room for everything, and everything in it's place 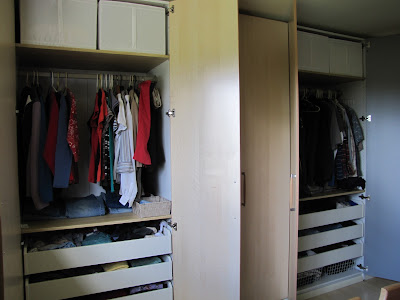 The center section still has room to spare 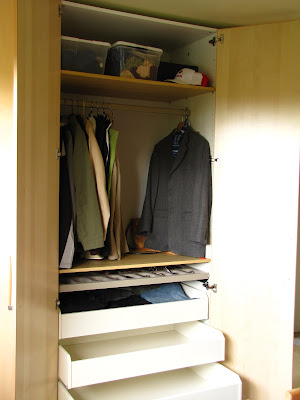 .  Right now we are working on putting a door on the old closet and putting some shelving or slide out drawers at one end of that space.  There will be a place to park the vacuum cleaner. We will have to do a bit of drywalling, unfortunately.  I think we have drywalled in every room in the house except the spare room.  Some rooms we have had to completely drywall.  Not our favourite thing to do.  We'll have to pull that narrow end closet out to do the drywalling.
I joked that the door should lead to an ensuite bathroom.  No such luxuries here.  Well I suppose there would be room for a porta potty and a bowl of water in there, but I think we'll pass. 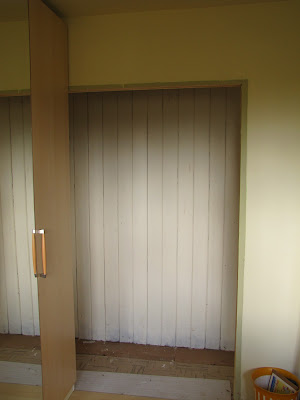 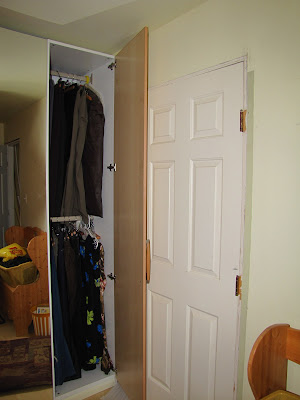 I did send my comments on their installation instructions to IKEA.  I'm waiting for my letter of praise and IKEA gift certificates to arrive in the mail.  Not sure why they are taking so long. 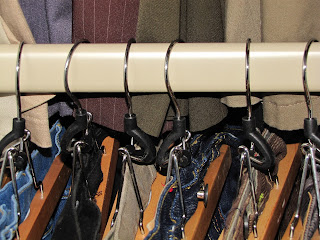 We went to Habitat For Humanity's 'ReStore' here in Abbotsford.  It's a place where companies like Home Depot donate old stock, discontinued lines, returns.  Contractors take in things that are reusable too.  That's were we got the door and jamb for the closet hole.  We also got the door handles for the closets there.  $2 a handle.  The big ones at IKEA were about $18 a pair.  No tax at ReStore.  The proceeds go to build the Habitat for Humanity houses.  A win win situation.  We've got quite a few things from them over the years.


Larry's working on the old closet, and I'm working on finishing the trim around the window, and then there are the two doors to do.  Whoever built this house framed in for the standard 80 inch doors, but then put some more framing in to install lower doors, including the sliding doors on the old closet.  Did they get a deal on a bunch of short doors?  Who knows.  But every door that we have replaced in this house became a major job, because we had to tear out some of the framing to fit a new door in, and of course that involved putting a new jamb in as well, as the old one was too short.  And then the door molding had to be replaced as it was too short as well.
Nothing is ever simple.
Posted by Karen at 10:04 PM