A Pedicure for April

April, our old Dorset X ewe, got a pedicure the other day.  Our sheep might only get their hooves trimmed once a year, when the shearer comes.  In fact that's all most of them get, and their feet are fine.  They do lots of walking around and seem to keep their feet in relatively decent shape.  April is the exception.
She has the same kind of feet as her mother, and for some unknown reason the outer claw on the front feet  grows much faster than the inner claw.  I knew she needed her feet doing, and was just waiting for a good day and time, which would be a day that was dry, with dry ground.  This particular day she was laid by herself in the old horse stall that is an add-on to the front of the barn.  We have a few bales of hay stored in there, and since the door is falling apart and falling off it's hinges, we've just allowed the sheep to help themselves to the hay, since the hayfield has been eaten down.  The other three ewes had wandered out to the field, and April was laid there by herself.  Since she is a former bottle lamb, and I've been feeding her grain in the morning, she is fairly tame.  Also, she is a couple of weeks short of turning 15, so she doesn't move too fast anymore. 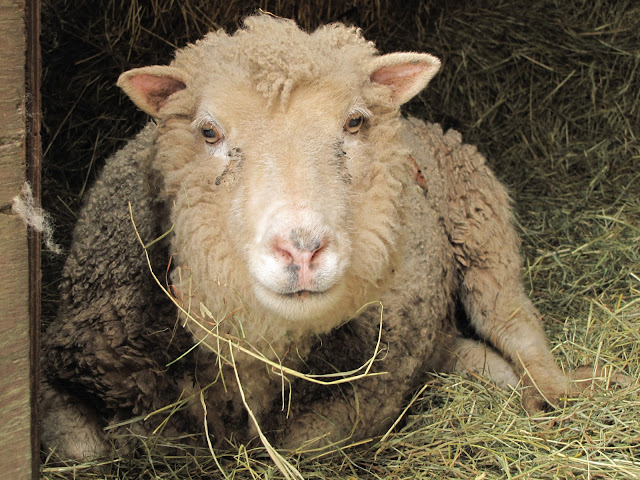 Since three of her four feet were visible while she was laid there, I was going to try and trim her hooves without getting her up and flipping her onto her backside. 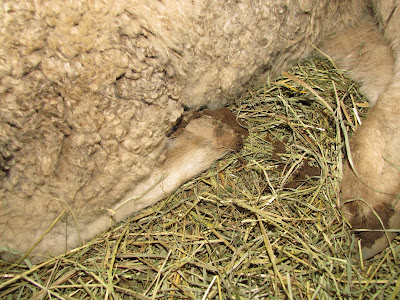 Here's my rather ancient looking hoof trimmers.  A good oiling would probably help them out. Like I said, I don't use them much.  There are much nicer, easier to use trimmers around now, but this was the standard variety about 30 years ago.
And yes, gulp, that is blood on the end of them.  I cut a little close, trying to cut the messy part away. 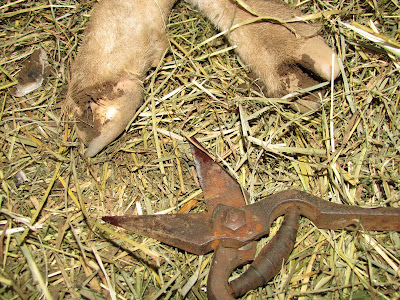 Here's one front hoof before I started 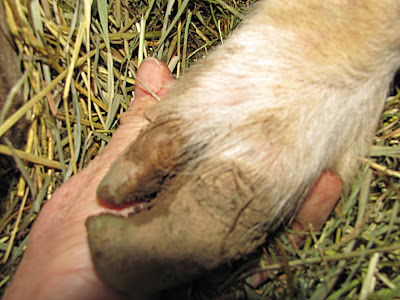 And here it is after I've finished.  The two claws never look the same, as the longer one is also much wider, but at least now they are relatively the same length. 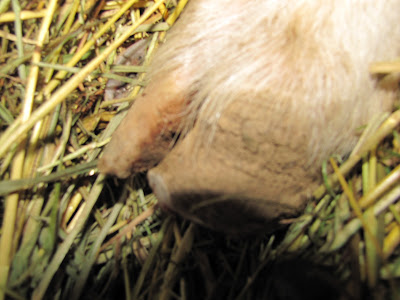 There's usually some infection in the bottom of the big claw, so I pour a bit of Kopertox on it.  It's like a foot bath in a bottle. 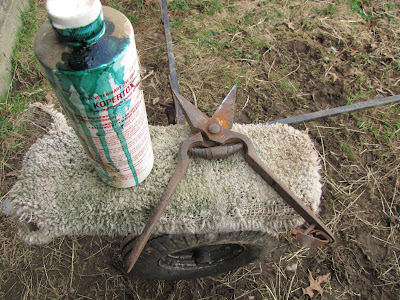 I wish I could say she was as good as new when I was done.  Not really.  She's quite arthritic in her hip joints.  I'm pretty sure she won't be around for another winter.  She still gets around though, and seems happy enough.  Look at the first picture and you can see that she is still bright eyed and alert.
The other day though, I was feeding her the grain.  She got some stuck in her throat I guess.  She stopped eating and her head was hung down.  Saliva was bubbling.  She flung her head around and strings of saliva and wet grain were thrown every where. She sneezed and snorted.  I left her alone while we took the dogs through the bush, as usually the sheep manage to sort this out themselves.  When we came back she was with the other ewes, but wasn't grazing, was still stood with her head hanging.  I went inside, got my sheep book out, and mixed up some baking soda and warm water that I use for bloat.  April's cute, but she has had her issues over the years, including bloating four or five times.  I figured that if I got some of that down her throat, I might help flush the blockage out, or help it go down. Just as I got it mixed, I looked out and she had her head down and was grazing.
April lives another day.
Check out Farm Friend Friday over at Verde Farm