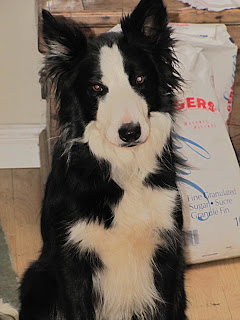 Take the photo on the left and add it three times to the red dog in the header photo, and you get triple qualifier Jake!!

Okay, my photo attempts totally sucked this morning, it is gloomy inside and out, and this just seemed easier.

Oh yeah, sugar was on sale the other week, and what with different stores doing price matches, I managed to get a bit of a stock for the jam making.


We went to an agility trial yesterday.  It ends up being an all day affair.  Up at 6am, and it takes us about an hour to get ourselves and all the animals organized before we leave.  Calli stayed at home, and Meredith took her for a walk midmorning before heading to work.  It took us half an hour to drive to the trial site, which basically just leaves us enough time to get our dogs settled in their crates before we have to walk our first course.  Jake was the 4th dog to run in his ring, and Luna was the 8th in her ring, so the first hour is a bit hectic. Once we have that first run under our belts, it is a bit more relaxing. The level that Jake runs at is a very large group, so after that it probably averages close to two hours between runs.
Remember how we have been practicing the weave poles every morning.  I had said to Larry that his aim at this trial was to complete the weave poles successfully with Luna.  At the last trial I don't think he had one successful weave, and he just gave up and moved on without her ever completing a set.
Yesterday, that first run just after we got there, she got those weave poles first attempt!! In fact all four times she did the weave poles during the day, she got it right first try.
Amazing what some practicing can do.
That made me so happy, because I know how frustrating Larry was finding it.
He was pretty happy too.
And, Luna did not knock a bar down all day!  And, most of her jumps through the tire were good too.
We've realized there's another thing that Luna needs to practice.  When she goes into a tunnel or the chute, where she loses sight of the handler, when she blasts out she quite often moves towards the direction she expects the handler to be.  Doesn't always matter if there is a jump 15' ahead, and you have told her to jump while she is still in the tunnel.  The pressure you put on her (movement and body position) when she comes out also makes a difference, and until the dog and handler know how to work together as a team, there are going to be problems.
We do have an old tunnel at home, so we will set that up and do some practicing on that too.
And I need to do some serious practice with Jake on the dogwalk and a-frame.  He is very slow, and I've totally messed him up on getting his contacts.  The dogs have to touch the yellow zone on the way down, and one of the most popular ways to teach that is for the dog to race to a stop at the bottom, with two feet on the ground, and two feet on the equipment.  Jake never raced to the bottom (he is very movement sensitive and really is not thrilled about being on that equipment), but somewhere along the way I've totally messed him up and he creeps down and doesn't seem to know what he is actually supposed to be doing.  And then I get tired of waiting and just tell him 'okay' when he's got into the yellow zone because time is ticking on and we need to get moving to the next obstacle.  This of course makes things worse, because with each slow step I'm sure he's thinking  'is this the one that will get me the 'okay'?'
Back to Luna.  I ran her in one class, which was Steeplechase, which is open to all levels.  Larry also had another class at the same time, which is okay, they realize you can't be in two rings at once and just move you around in the running order, but it does mean that you have to remember two different courses, and Larry has a hard enough time remembering one course.  Since I had already run Jake in that class (clean run for him!), we decided I would run Luna in that one, and Larry would run her in the Advanced Standard.  Good decision, as Larry got a clean run in his class!  Didn't go so well for me.  I forget that I have to handle her different than Jake, so there were a few little glitches, but overall pretty good.

Here's Larry and Luna's clean run
And not to neglect my sweet little Jake.
Out of five runs yesterday he had three clean ones, and the other two were very close. Unfortunately Larry wasn't able to film any of the clean runs. 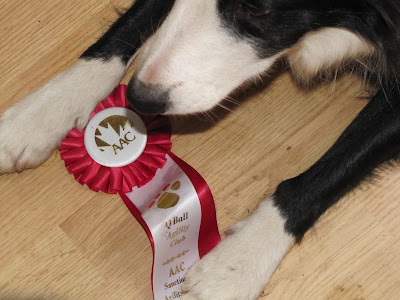 Give that to me you little b**ch, didn't you hear I won THREE of those ribbons.
And Mum only brought this one home for a photo op anyway...
.....but...it makes a good toy...
Wanna play tug? Oh yeah, there's a bit of a chicken story over here.
Posted by Karen at 9:49 AM