I've mentioned a few times that Larry has a lot trouble getting Luna into the weave poles.  A lot of it has to do with his inexperience,  and then add in Luna's bull in a china shop, don't care what I hit, let's get on to the next obstacle mentality, and the combination is a bit of a mess.  Last September the spacing on the weave poles changed.  It used to be 20" between poles.  The powers that be, following the lead of some other agility organizations, decided to up the spacing to 24".  It's much better for the dogs, less torque on the back.  The skill level is still the same, it's just easier for the dog's body, particularly the large dogs, to execute the weave poles.  There was a lot of concern initially from the small dog owners, worried about them not being able to handle the larger strides between poles, but I don't really think that ended up being an issue.
As a result of the change, we decided not to practice on our old 20" spaced poles, which meant Luna only got a small amount of practice on Monday nights at our club.  Things were falling apart.
Larry had a lesson the other week, and his instructor said she practices on her old poles all the time, so we got back to practicing in the mornings as we passed by the poles on the way back from our bush walk.
(hmmm, I think I've already blogged about this)
It doesn't seem to make any difference to Jake and Luna whether the poles are 20" or 24" apart, they adjust their striding immediately.
Okay, here's what I was actually getting to with this whole blurb.
I'd heard stories of dogs tails getting caught on the poles.  I honestly had a hard time believing it.
Well it happened here the other day.
It was probably a damp day.  We came back from our bush walk. The dogs were wet. Luna weaved a few times.  This particular time she came to a screeching halt.  Her tail hair was wrapped around a pole, a few poles from the start,  and she couldn't go any farther ahead, which she was trying desperately to do.  I couldn't get the tail unhooked from the pole until we physically picked her up and moved her back to make the tail loose.
I'm a doubter no longer!
Here's a few pictures of Luna yesterday.  We were invited by some new club members to practice at their place.  Photos courtesy of Marie-France 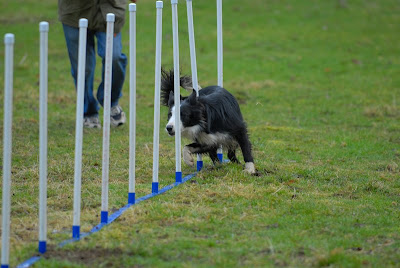 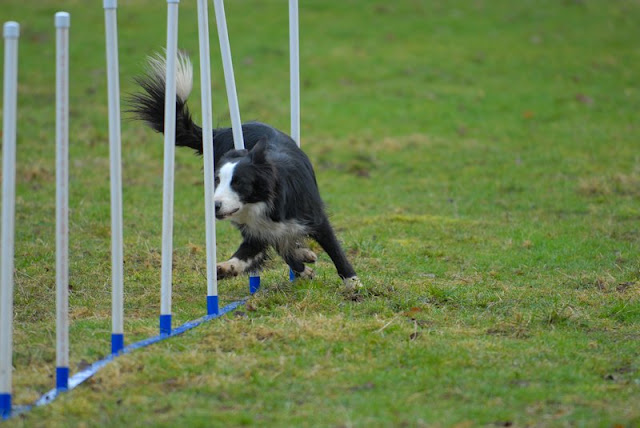 Luna's tongue quite often seems to do it's own thing 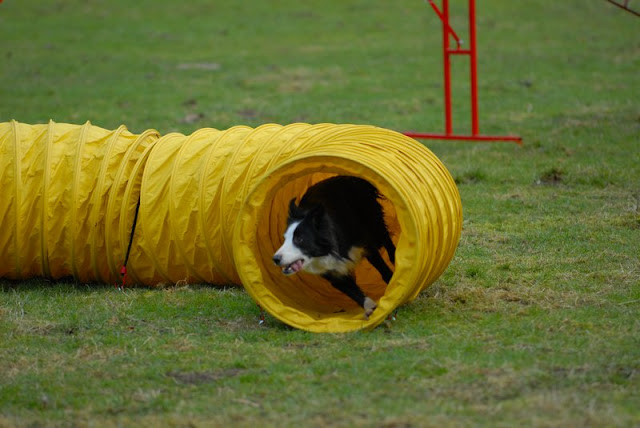