Yesterday we had a perfect day, the kind that we say that we could take for the rest of the year.  Sunny, warm but not hot, a bit of a breeze, perfect!
It's the kind of weather that is great for working outside.  We've been picking away at the garden.  Today we just about finished weeding out all the perennial beds, and some of them are mulched.  We are almost to the point that the rest of it could be rototilled.
That little tiller that Larry badly wounded last week.... well they phoned us a couple of days ago to tell us that the part had to come from Alberta, and it would be about $100, and then it would be about $175 in labour.  Add taxes to that, and it puts is over $300.  Good grief.  Do I love that rototiller that much?
That's going to make for some freaking expensive vegetables.
David said he was interested in looking at it and maybe he could put the part on (the intake manifold) himself.  Of course it's going to be really embarrassing if he can't do it, and we have to take the rototiller back in and get them to fix it.  Maybe we could find a different place to take it to.  So the plan at the moment is to bring the rototiller home as soon as the part has come in, which will hopefully be tomorrow. 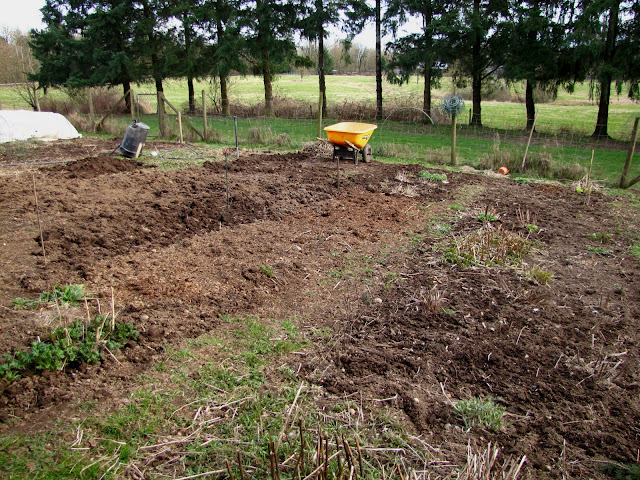 I should have taken this picture yesterday when I first spread the compost on that perennial bed along the fence.  The hens were all lined up along the fence, their heads and necks stuck through the wire, picking at the worms and other stuff in the rotten horse manure. 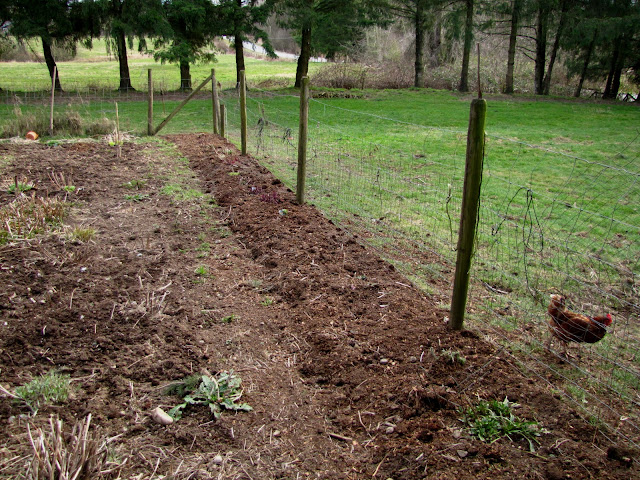 And then in the afternoon the dogs always expect some kind of walk.  Sometimes we just walk around the block, but today we went down to the dyke.  The first stop is always their favourite swimming hole.
Calli has a rock, and is on the other side of the creek. 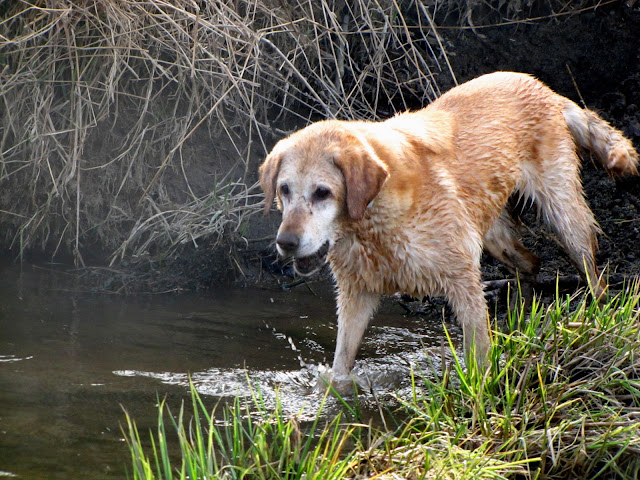 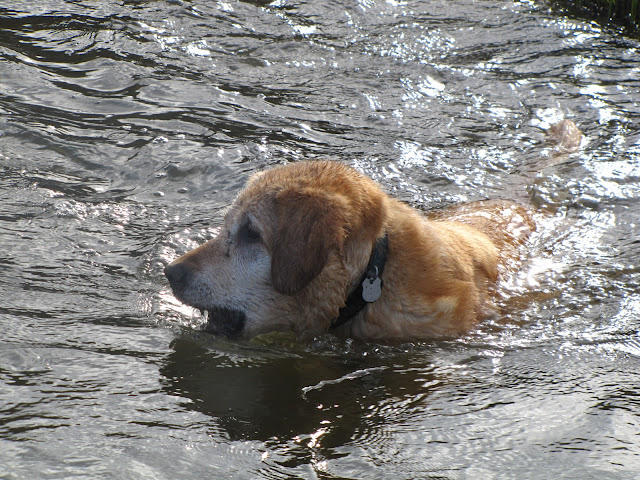 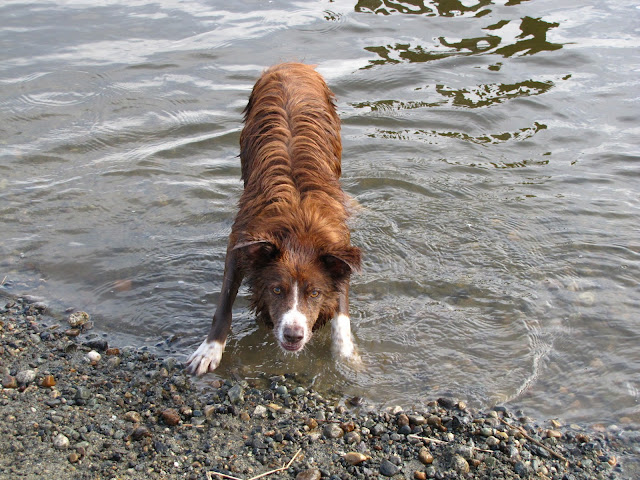 See those pilings in the distance, over and to the right of the dog's heads.
There is a gravel bar there, and that is were we met up with Donna and Breeze, some agility buddies.  Donna always has a chuck-it and a couple of balls with her, so Jake and Luna are thrilled to see her. 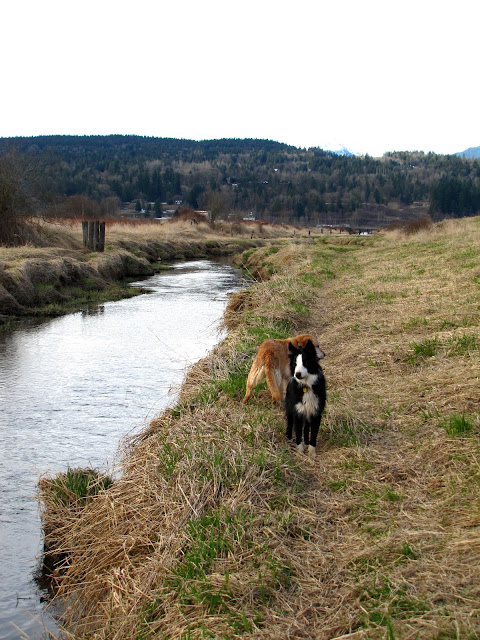 At the edge of the bar, right by the water, I saw a pair of sunglasses.  I figured they would be broken, but they were still in one piece.  On the inside of one arm they said 0-2years.
Yep, they were sunglasses for a baby,
or maybe a dog!
They fit Jake perfectly.
He was one cool dude! 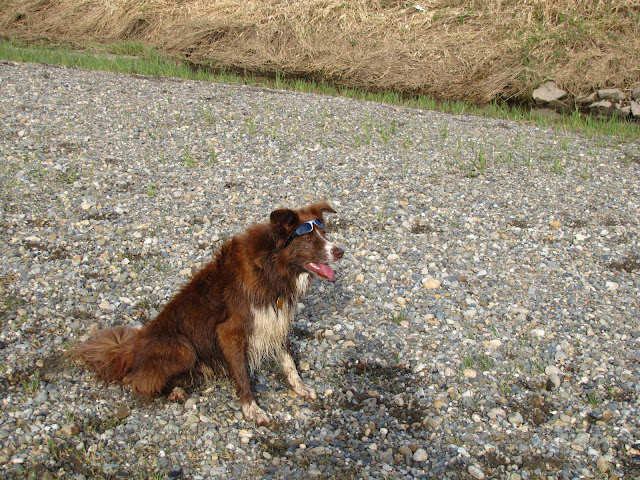 He didn't care that they were on his face. Nothing distracts him from the ball.
He ran after the ball and came back without the sunglasses.  Larry and I were back tracking along his route, and then Donna yelled that they were on the back of his neck.  When he ran they had flipped up and over the top of his head and were resting behind his ears.
Whatever, just throw the damn ball! 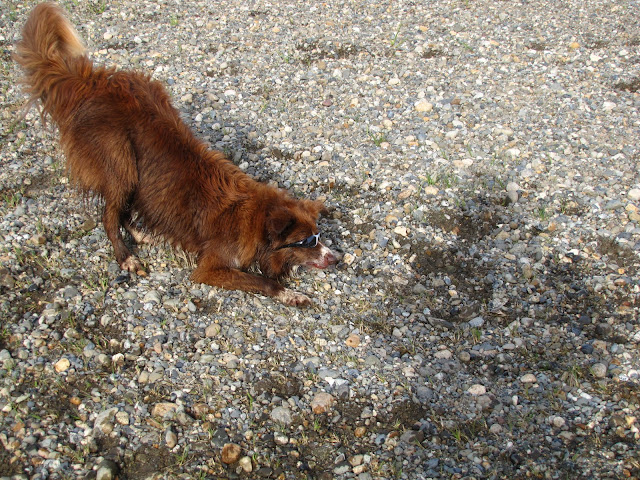 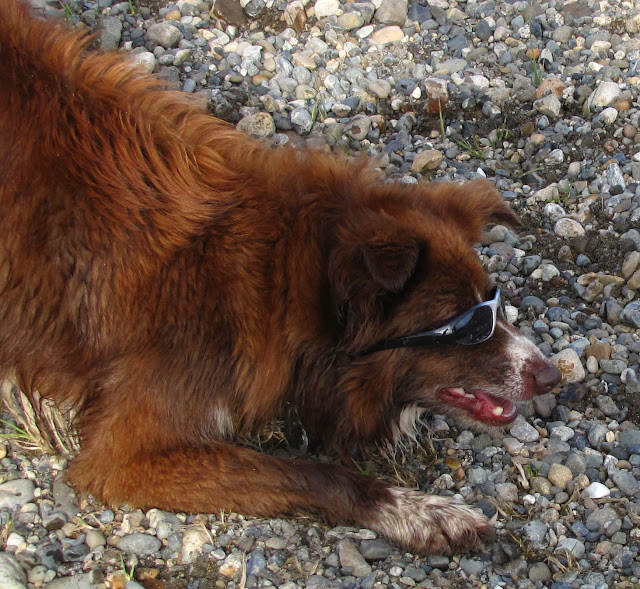 And today we got two eggs from the new hens.  One was outside on the ground, and one was in a nest box.
Lay, girls, lay! 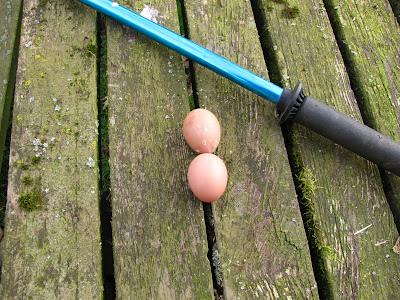