I've mentioned before how Calli likes to take the path less travelled when we do our bush walk in the morning.  The last few months have been a bit of a trial at times.  We are walking along the trail, maybe talking a bit to each other, or maybe listening to those voices in our heads, and then one of us will suddenly remember and say, 'have you seen Calli?'
And the other one will say 'the last time I saw her, she was....'  Probably she was heading in the same direction as us at that point, but may have stopped along the way to root something up, or do some other disgusting thing that dogs revel in.  She's in her own little world out there.  Some days she doesn't walk down the trail at all, but goes through the underbrush, following the little trails that she and the coyotes have made.
We do want her to have 'fun' out there.  This is the highlight of her morning.  If we go somewhere off the property we don't have this problem, but I think it is that she is so familiar with the walk and since we have to circle and come back to the same gate we started through, that she knows we truly won't be abandoning her.  She has that old dog selective hearing when she's out there.  If she was fully mobile, we'd probably just leave her and let her come back on her own time.  The way she is though, there's a chance she could get stuck or caught up in something, and there are coyotes....
The problem is that we get back to the gate, which we'd really rather close behind us, we don't know where Calli is.  Usually Luna will be waiting there, and Jake too, or he will come when called, even though we might not have seen them much on the actual walk.
So we do a lot of calling, and then yelling, and then listening for the sounds of cracking branches. 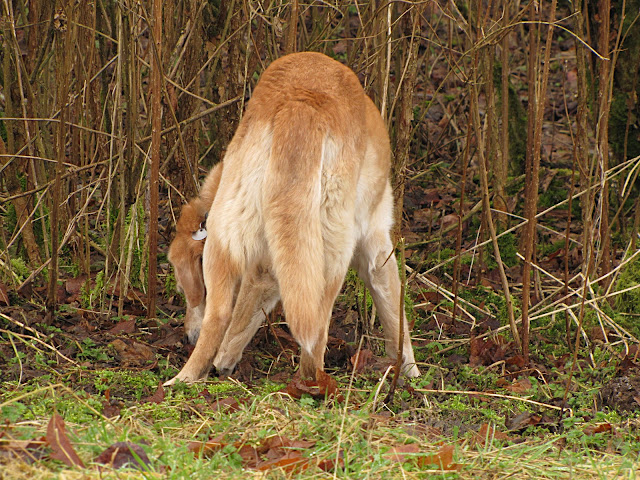 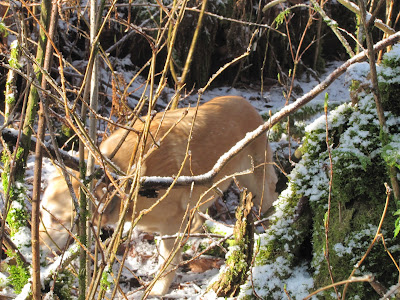 You can see how hard it is to spot her out there at times.  Imagine when all those salmonberries have leaves on. 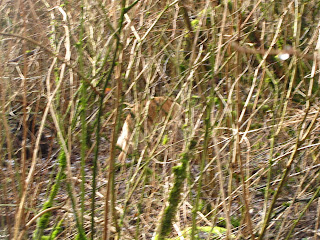 So I suggested that we 'bell' her.  I knew that somewhere we had a cowbell.  Never remembered it until we were already out in the bush, but one morning I did actually remember it before we were more than a few hundred feet from the house, so went back and managed to find it, which is an amazing thing in itself.
Calli was not impressed.  She was so not impressed that she plodded along behind us down the trail for the whole walk.  She didn't have any fun.  The cow bell was heavy, and it was loud, and she looked like she wasn't happy. 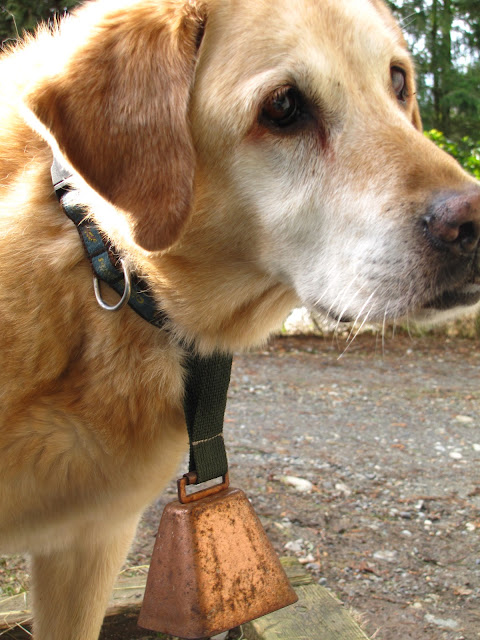 So the next morning I tried a different plan 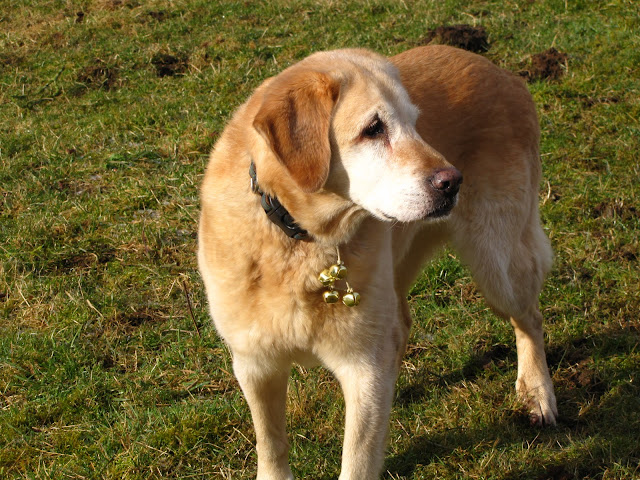 Four little bells.  She liked it. It didn't bother her at all.  She headed off on her excursion.  We couldn't hear a thing. 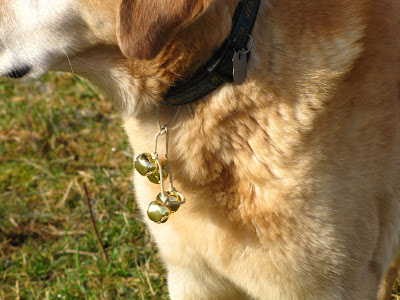 Yesterday when I was at the Co-op, I checked out smaller cowbells.  Would that work?
Cheap me decided I didn't want to spend the $9 to find out.
And here's a funny sheep story to go along with that cowbell.
A lot of years ago, well less than 15, I put the bell on April, (our old ewe who is almost 15).  I wanted to put the sheep out in the back hayfield, which is mostly visible from the house, and I thought the bell might help to discourage any coyotes.
April wasn't thrilled about it.  The more she moved the more it clanked.  The other sheep were less thrilled. They moved away from April.  She wanted to get back with the flock.  The bell clanked more as she tried to catch up.  The rest of the flock moved faster to keep away.
Well I'm sure you can see where this is going.  Before long the flock was racing around the field, with clanking April bringing up the rear.  I thought they were going to run themselves to death.  I think I managed to snag April and remove the bell before that became reality.
The flock said 'thank ewe'
Posted by Karen at 8:58 AM