Usually in the morning I will go out to the garden and wander around.  At the time I am making mental notes of things that NEED to be done, but somehow they just don't seem to be GETTING done.  After having a discussion with another vendor at the market on Saturday about exactly the same thing, I decided to take paper and pen with me this morning and make a list.  For some reason when things are written down, there seems to be more of an urge to get them done, I guess being able to cross them off the list just makes it that much more interesting.
So here is the list I wrote this morning.  I knew there was no way I was going to get everything done, but they are just things that need doing.  I tried to break some jobs down into smaller parts so that I could finish them in one go and be able to cross them off. 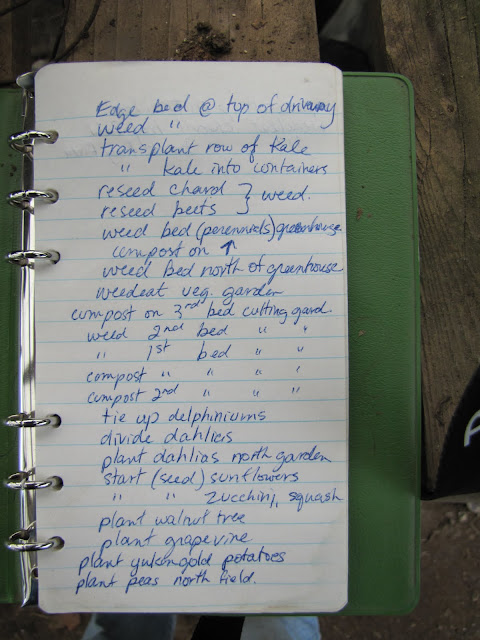 The first thing I did was the top two items on the list.  This is where the broadbeans are planted, along with some Norland potatoes and a little bit of garlic.
Then I headed into the garden and then I weeded the perennial bed on the south side of the greenhouse, and was going to head out of the garden to get some compost to put on that bed.  This is what I saw. 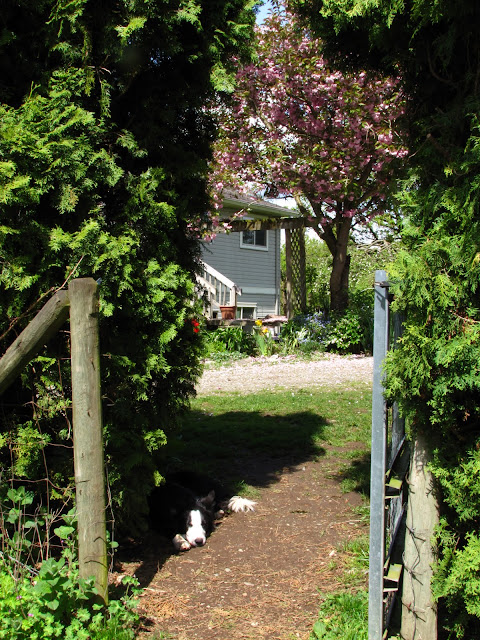 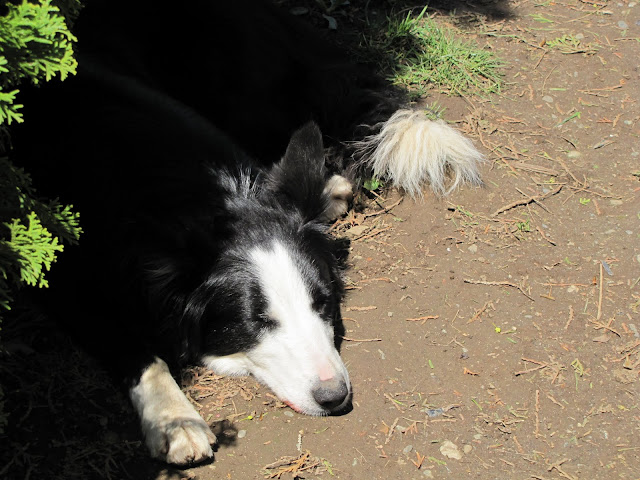 Not very often you catch Luna doing this when you are outside.

In fact there were two resting border collies. 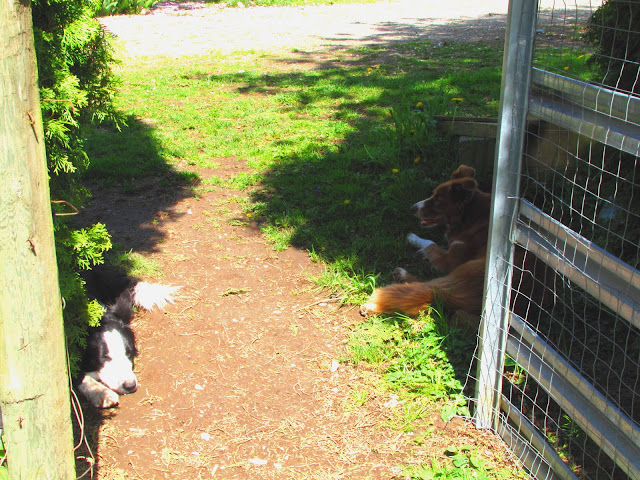 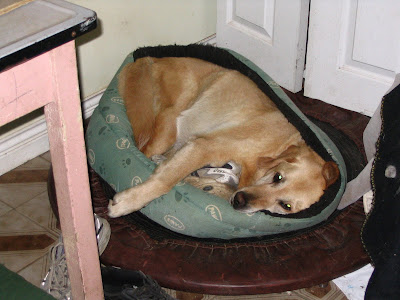 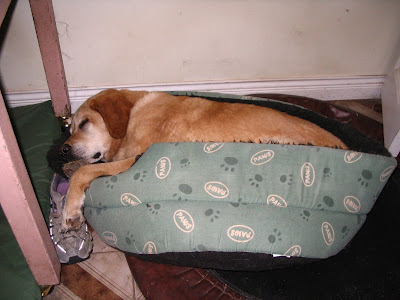 We got rid of that soft sided bed, since it was really a bit small for Calli, and since she has no awareness of her back end and where it is located, she ended up in the goofiest positions.
You'll notice a lot of runners in the pictures.  No we don't kick them off there when we come in, Calli picks them up and carries them there.  She likes to pile them up and use them as pillows.
These days she would look more like this 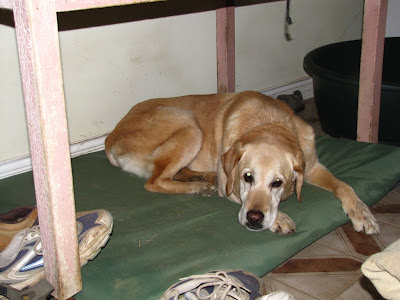 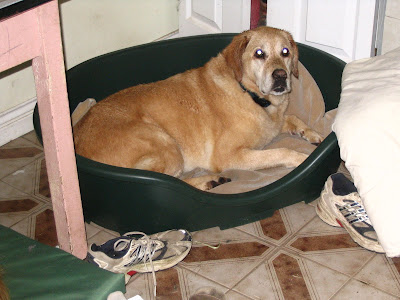 With the two dogs laid at the garden gate,  I knew if I walked through it, they would move.
Then I remembered that the basil was probably cooking under it's plastic tunnel, and would need watering.   By the time I turned the tap on, which is on the side of the greenhouse, Luna had moved and was down staring at the leaking hose, and then at the sprayer when I turned it on.  She loves water coming out of the hose 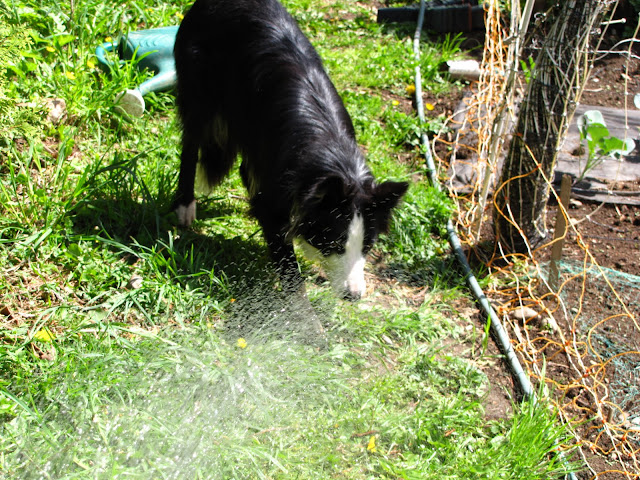 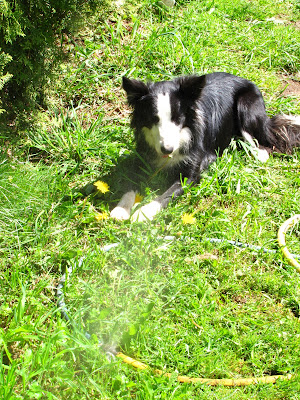 The basil got watered, it is well germinated, and I'm really happy how it's coming along 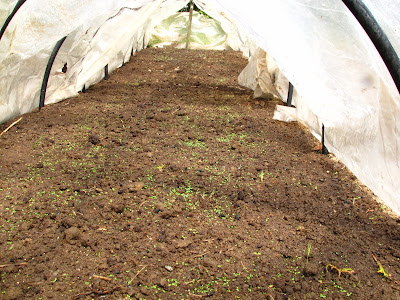 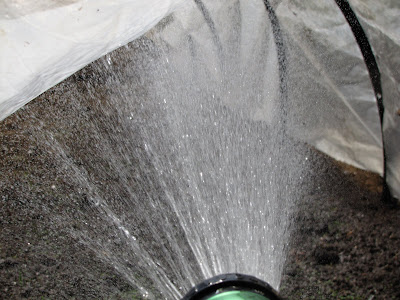 The compost got put on a couple of beds and then I moved onto another job.
All the dahlia tubers were dragged out of what used to be the wine cellar (from the days when Larry used to make wine at one of those U-Brew places).
They were split up with the help of my handy dandy $2 hacksaw that I bought at a garage sale a few weeks ago.
I orignally bought it to help my cut up the turkeys for the dogs, but like many tools, it has multiple uses.
So much dirt later, and the discovery of a mouse nest in the bottom of the dahlia heap (gross!, and thankfully it was abandoned), the job was done.  Of course that creates another job.  There is now a big mess to clean up, and I have to figure out where to put the dahlias until I get them sold/given away/planted.
I did decide that it is probably much better to get them divided up before they are actually sprouting, as more than one sprout was knocked off in my butchering.  If there are any dahlia experts out there, when do you do it, and what do you use to do it with?  I did find the hacksaw rather crude, but some parts were too big for a utility knife. 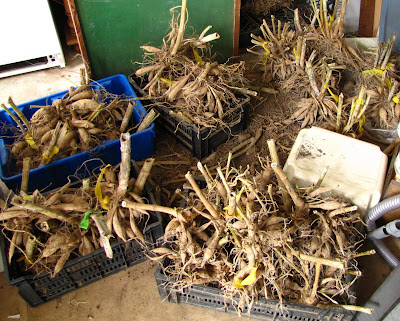 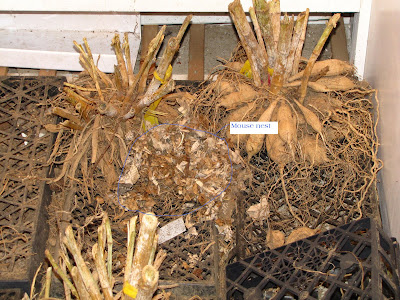 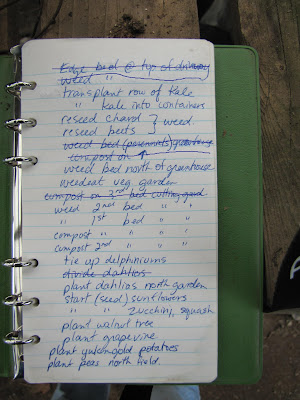