And what's Easter without chocolate... 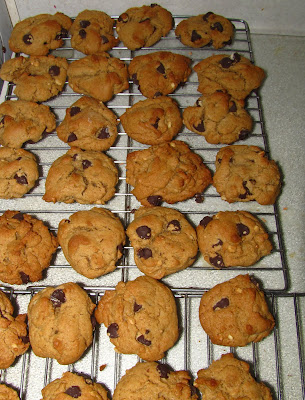 I was working my way through a bag of chocolate chips, (yep, I'm an out of control chocolate lover), so decided to bake something out of them before they were all gone. Peanut butter chocolate cookies it was! There were 46 cookies, and hmmmm.... by  evening half of them were gone.
You do the math, and then divide by three, as three of us were working at them. I think it was green tea and cookies for lunch. Well at least the cookies were more than half whole wheat flour, I used oil instead of butter, and some of the peanut butter was organic. Add the green tea to that, and doesn't it sound oh so good for you?
So to counteract that 'healthy' meal, I put this together. I LOVE fruit salad. A few slightly damaged/over ripe fruits from the 'Reduced' rack at my produce store, a can of pineapple and one of mandarin orange segments, and voila!! I can down as much of this as the cookies, but at least it doesn't come with the same guilt factor. 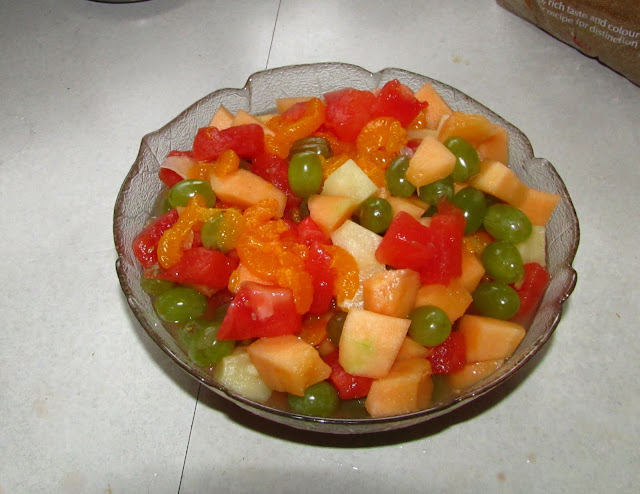 And then we needed some exercise, or at least the dogs did....
Larry likes to look at Google Earth, and he informed me he had found a new place to walk the dogs. There is an industrial park a few miles from us that is supposed to be somewhat environmentally 'aware'. Anyway, in the middle of one of the large blocks there was a 'wild' space. You could see some ponds, and trails/pathway things, and it was a over a mile to go all the way around. Add to that the extra distance the dogs run, and it would be a decent walk for them anyway, and it was somewhere totally different. Well how it appears from space in Summer, and how it was today on this day that is supposed to be Spring, are two different things, and it was a HUGE disappointment. Where we entered, there were big concrete blocks to try and keep the dirt bikes and four wheelers out. There were piles of garbage dumped there that we had to pick our way through. Once again, segments of the human race just disgust me. The trail/overgrown track was a mess, many parts so wet that we should have had rubber boots. In a couple of spots we came across all sorts of plastic coatings off wires. The cables had been cut and stolen and taking into there to be stripped of their copper. When we got to the other end we just went out to the road and walked back that way. At least the road had a nice grassy boulevard to walk on. I took the camera but there was nothing worth taking a picture of. The dogs enjoyed it though, always exciting for them to go somewhere new.

The wind is howling this evening, the rain is hitting the windows, I am waiting for the reappearance of Spring, and I'm really, really hoping the power doesn't go out.
Posted by Karen at 9:49 PM