I seeded a few more things this week, so wanted to report this, for my own sake.  They always say you should keep a record of your garden, but like many other things, I procrastinate and it never gets done.  Well this year I am hoping it will be different, and there will be pictures to boot!

On Tuesday I seeded carrots and arugula, next to the broccoli.  Then yesterday I seeded spinach and salad greens.  Today we got the last of the garden spread with compost and rototilled in.  Under the tunnel greenhouse, I have planted basil.  That is in a bit early, well it is recommended here to be planted May 1, but since we are having a few warm days, I thought I would see what happens.  It likes warm soil and the heat, so does best when it is started under the hooped plastic, at least for me here.  For some reason Luna kept going in it, maybe she thought it was a giant agility tunnel?  Smudge the cat will usually treats those tunnels as her own personal sauna, and can be found laying in there on sunny days.  Everything has some sort of netting or fencing to keep it safe from the occasional wandering chicken. 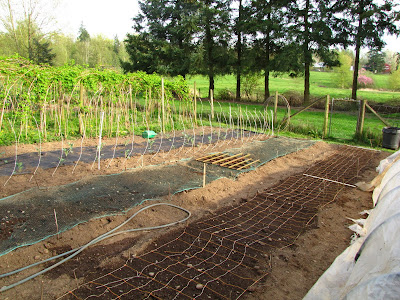 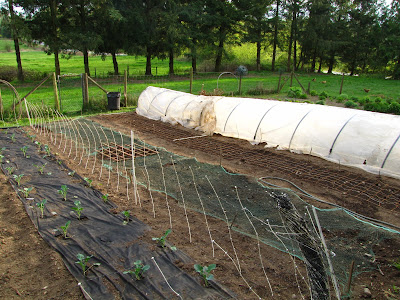 I am spying a few more potato shoots just poking through.  The peas are growing, and sending out the first tendrils.  There was one tiny edible radish in the row that had been planted alongside the early salad greens.  The soil there looks rather compacted now, and is getting weedy.  Since I planted that stuff so early, I should have put the hoops and plastic over them too, and they wouldn't look as sad as they do.  The beets are going to have to be reseeded.  Some are up, but not looking too enthusiastic. 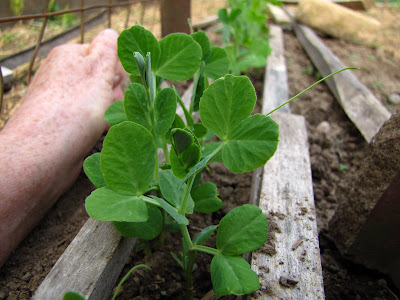 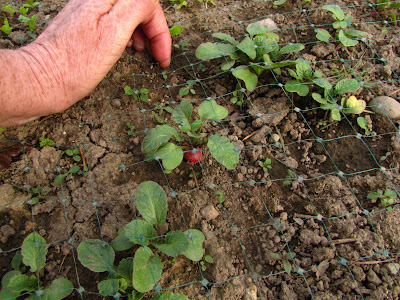 The kale is really trying to flower, and I am eating the tops as they start to show some yellow.  There are more kale seedlings showing up from some plants that I had at least a couple of years ago, so I will transplant some of them into a row. 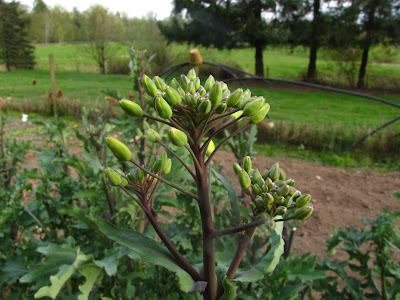 The chickens love eating kale, so last year all the big coarse leaves got thrown over the fence to them.  Yay for recycling:)
Posted by Karen at 6:54 PM