Someone Lost Their Snow

We found it though, and would be glad to send it back to you.
Driving into the whirling snow tunnel 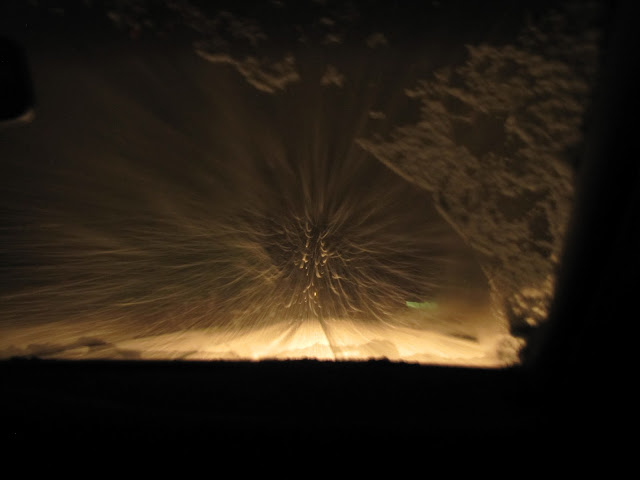 The poor apple tree hasn't even shed it's leaves yet. 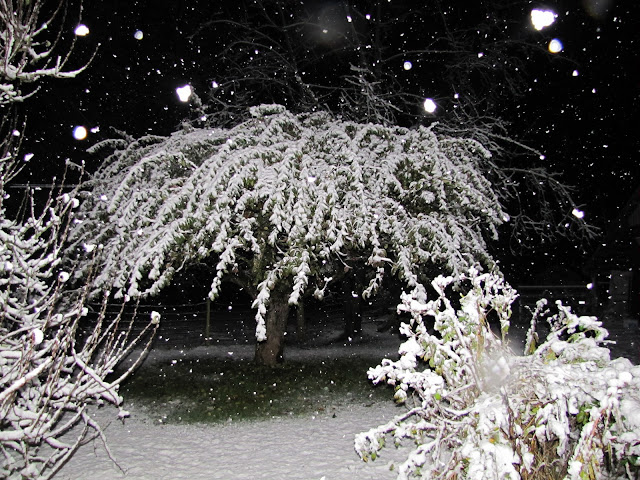 Luna had a chiropractor's appointment tonight.  At the beginning of last week, I'd noticed a hitch in her step.  Just the occasional holding up of her back right leg for a stride or two.  I always imagine the worst, thinking torn ACL or something as ugly.  Common sense took over, and I considered the idea that there might be something 'out' in her back, maybe a pinched nerve.  It certainly wasn't bothering Luna enough to slow her down, and in a couple of days it seemed to have disappeared.  I did call to make her a chiro appointment though, and had to wait until tonight to get her there.  I actually wanted to take all three dogs at the same time, as that way you get a 'bulk' price, but there wasn't an opening for three dogs until the end of the month.
Late this afternoon, the rain mixed with wet snow turned totally to the white stuff, and by 7pm we had a couple of inches and it was still coming down like mad.  I called to make sure the chiropractors office hadn't closed down and gone home while the driving was still good.  David had just finished changing to his snow tires, so I offered him a good reason to try them out.  Since there had been some cancellations at the chiropractors because of the weather, there was now time for all three dogs.
Once we got down into the valley next to the river, the snow wasn't much of an issue.
Luna really had some sore spots.  I think she would have turned around and nipped Lana if I wasn't holding her nose.  Lana said it was a sciatica type issue, so I wasn't too far off with the nerve guess.  She wants to see her again in a couple of weeks.   Jake and Calli had some smaller issues, but issues all the same.  Jake and Calli really love Lana, Jake went over to give her some licks while she was working on Calli.  Luna is warming up to her as well.  Of course the treats Lana hands out at the end of the session help with that:)
Our dogs are much harder on their bodies than we are on ours, they deserve some help to keep things working smoothly.
Posted by Karen at 9:17 PM