This is the backyard chicken crew.  Never mind that they have half an acre to wander around in if they stay where they are supposed to.  You know that old saying....The grass is bugs are always greener better on the other side of the fence.
This is the ring leader, a scrappy little bantam cross.  Wild little thing.  We've had him a few years now, and half the time he'd still rather roost in the trees at night.  Larry has a 15' piece of ABS pipe that he whacks the evergreens near the coop to scare him out.  It's for his own safety, and us and our neighbours early morning peace 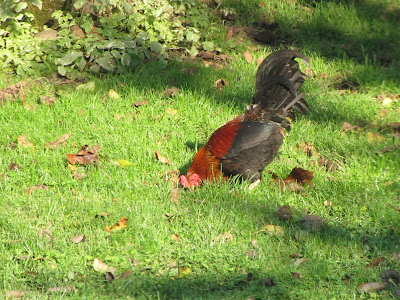 He likes to let the world know that he has arrived.
Ra ra ra ra raaawwrrrr!
When he crows, it doesn't sound much like cock-a-doodle-do.  But then I've never heard a rooster that really does. 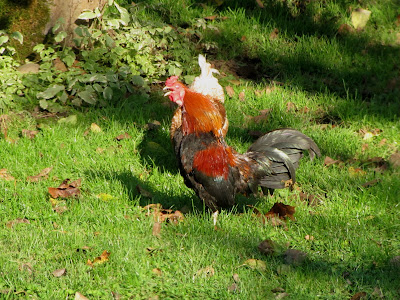 By the time the crew was done, I don't think there was a bug left alive under the pear tree.  Usually we have some pretty decent pears.  I give the chickens credit for some of that decency.
This year though, the pear crop was pretty well non existent. 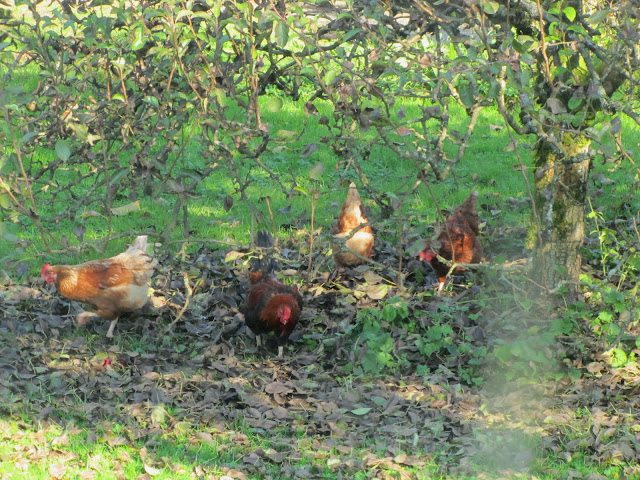 April and The Old Ewe visit the back yard occasionally.  April is older than The Old Ewe, which really doesn't make much sense, but it is what it is. 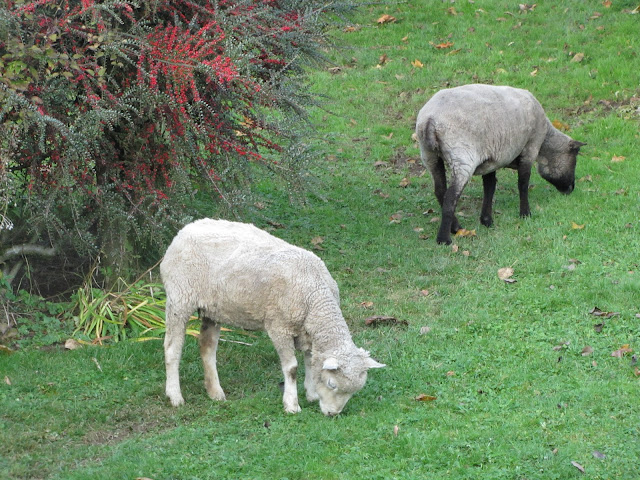 April had another bloat session about a week ago.  Another dose of the baking soda cocktail did the trick.  Then last Saturday as I was just about to leave for a farmers market, Larry comes running in to say that April is flat on her side in the barn, not moving.  She's still alive but.....
Larry's not a sheep guy.  I said that maybe she just couldn't get up.  In the meantime I change back into the  'farm' clothes I'd just changed out of, and head to the sheep barn.  Larry has got her up.  She's fine, a bit wobbly and disoriented, but eventually puts her head down to the grass to eat.  She'd just got herself in a position where the floor was uneven and she couldn't get herself up.  She'd been stuck that way for a while, judging on the way she was acting.  So one of the first things I do in the morning now is to check that April hasn't got herself stuck somewhere.
And the bloat thing... Well we've figured out that if we let her out where there is lots of grass, she just never stops eating, never lays down out there to chew her cud.  She just overfills herself.  So now we let her out for a few hours and then put her back in the home field.  The Old Ewe goes with her.  T O E does have the sense to head back on her own.  April has always been a bit of a individual.  So today they got out for a few hours in the morning, and then in the afternoon I opened the gate to the back lawn, and they were quite happy to stop there and eat.  Fine with me.  It was a lot easier than having to fetch April from the far side of the hay field.  She doesn't pay much attention to Luna, probably can hardly see her anyway.  She can't see much.  The best way to bring her back is lead her with her bucket of grain.  She seems to be able to find that easily enough.
And you know how they always say that the camera adds 10 lbs.  Well that's true in April's case.  She's still not much more than skin and bones, and I'm not expecting that to change at this point.  She can still manage to walk a 1/4 mile or so each day as she wanders back and forth, so I guess she's not quite done yet. 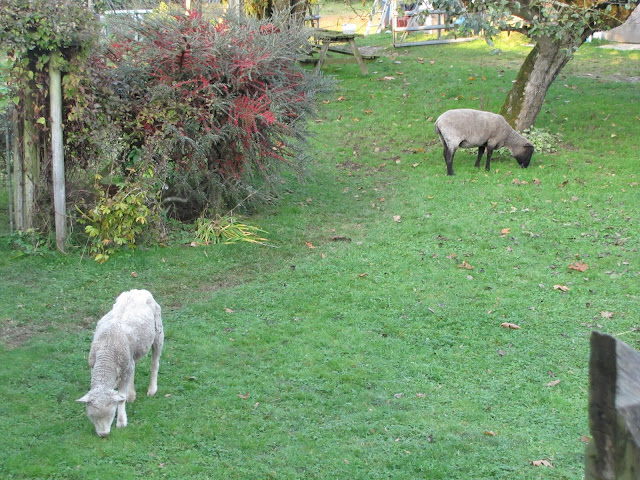