Last evening sometime before I went to bed, I heard a soft mooing.  Now it seemed like it came from the back of the house, and the only cattle around here are across the road or two properties to the south.  I thought it was just my ears playing tricks on me, making me think the sound was coming from somewhere it wasn't.  You know how it is, it's dark, it's cold, and you really don't want to be wandering around outside with a flashlight right then, trying to track down the source of one little moo.  I even wondered if it was the sheep, but it sounded too 'sheep unlike' and so I just rationalized the sound as best I could.
This morning we bundled up, did the bush walk, came back, gave Pride some hay, got The Old Ewe out, and I heard it again. I t sounded like it was coming from next door's, and I start to wonder if they have suddenly got some cattle.  Then I heard it again, and it sounded really close, like in our hayfield close.  So I look in the direction of where the moo came from , and this is what I see. 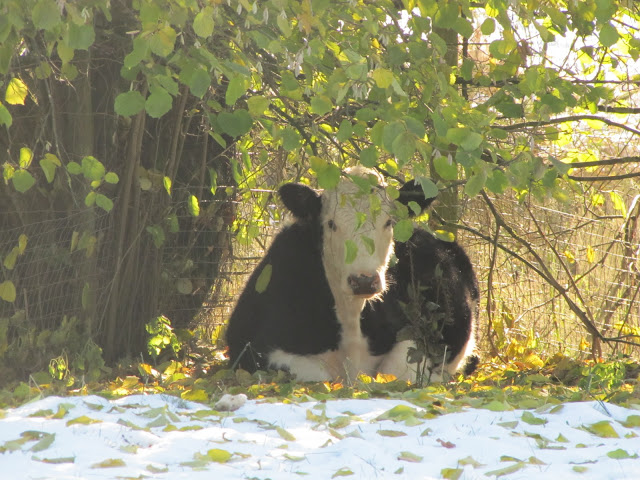 Laying peacefully under the hazelnut tree that is in the hay field, but actually on the other side of the fence in the south chicken field, is this heifer or steer, or maybe it is the heifer bull cow called Bert from Craigslist.  No, probably not, as it certainly wasn't friendly.  As soon as I got within 50 ft, it was up and gone down to the other end of the field.  We wandered around trying to figure out how it got in the fenced field, but it was a mystery.  We headed down to the other end of the field and it panicked and went over the 4' fence with no hesitation.  Got one back leg caught up momentarily, and then it was gone.  It had landed on the driveway, fortunately for us on the part of the driveway between the gate and the road.  At least we didn't have a panicked steer charging around the back yard.  We went out to look for it, but it had totally disappeared.  We walked up the road to see if it had gone into the field to the north of us, but no luck.   I went back to see if it had gone in the field to the south, as Jake was barking out in our hayfield, but there was nothing.  Larry talked to a neighbour walking down the road.  She hadn't seen it, but she had seen the whole herd belonging to the neighbour two doors down out on the road last night, so I think the mystery was solved.  It looked like that steer had got into our field the same spot it got out, as there were frozen tracks next to the driveway.  Hopefully it finds it's way home, or maybe it could find a better home actually.
Posted by Karen at 11:34 AM