Nelson had some fresh air today.  Not that it was his choice, it was mine.  I can hear my mother now....'It's nice out there, get yourselves outside'.  He wasn't panicked or anything, and the dogs couldn't get up there.   I was mean though and called Smudge up.  She got to the top of the steps, saw Nelson, hissed, hissed some more, and then ran back down and sat on the bench under the arbour, totally disgusted with me I'm sure.  After about 15 minutes I let him back in, and he slunk back to 'his' bedroom.  He's actually coming out from under the bed even less now.  I can hear readers saying that I should just leave him alone and let him come out on his own terms.  I need to comb him though.  I had a big session a couple of days ago, and combed out another cat's worth of undercoat.  It's incredible the amount of hair he carries, oh, and leaves chunks of all over the bedroom.  I did the same thing today, and got another big pile.  He is looking a bit smaller now.  I found a big flat mat on his lower abdomen.  A large area matted right to the skin.  It took a lot of careful scissor snipping to get that off.  He does love to be groomed, and you can get him on his back and stretch his legs out to get some of the tricky spots, and he seems quite relaxed when you do that.   He's very nervous though, and if he is out from under the bed, and you go into the bedroom, he scoots back under it in a hurry. 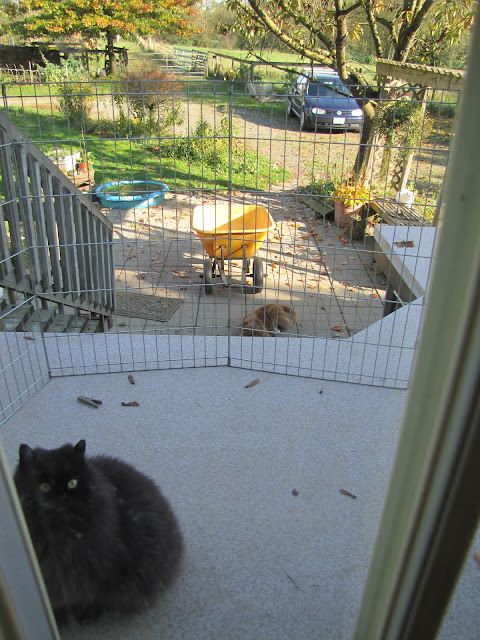 Yesterday I put a leash and harness on him and took him outside on the grass.  He wasn't impressed, and I won't do it again for a while.  It was nice to see that he knew exactly where the back door and safety was though.
Posted by Karen at 1:00 PM