I have been doing the occasional moaning on here about our lack of sunshine (and a lot more moaning to family members).  Actually Meredith and I are wondering if we are noticing it more because it is making it harder to get our '365' pictures.  During the week the weather guys were predicting we would see some sunshine on Saturday.  Of course as Saturday got closer the amount of sun predicted got less, and then by this morning it had disappeared.  Late morning when I checked the forecast again, not sure why actually, it did show sun and cloud.  That was at the same time as the clouds got thicker and it started to drizzle.  Now the Abbotsford airport, which is the weather station I was looking at, is only 15 minutes from here, so surely their weather couldn't have been that different from us.
About 4:30 this afternoon we were heading out for a walk, and when we got to the bottom of the driveway, it was kind of a 'Holy cow, there it is!' moment.  So I quickly handed Luna's and Calli's leashes to Larry, grabbed the keys from him and charged back to the house to get the camera.  This is what I saw. And then a few minutes later got this. 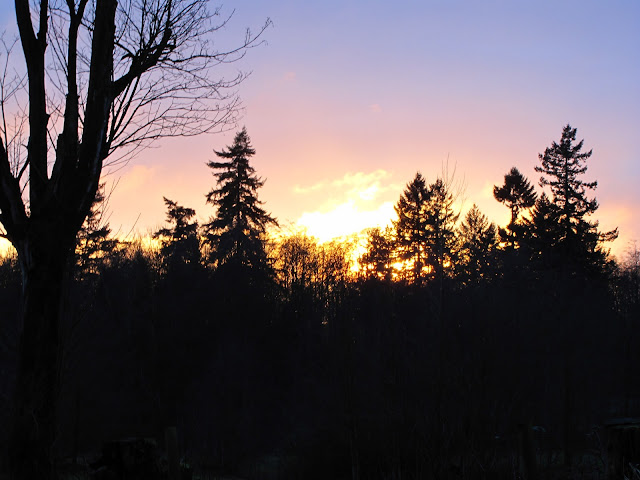 The dogs were totally unimpressed.  There they were, all wound up because they had their leashes on and we. were. going. for. a. walk.   So why the heck were we all just stood there? 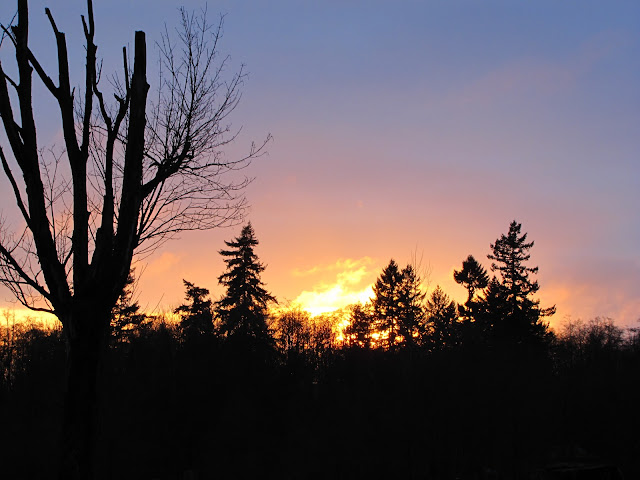 And on a farmy note, we cleaned out and repaired the south chicken coop today.  One of the roosts had come apart, the particle board on one wall had pulled away, and a 2x4 had given way under the floor boards. It actually looked like it had never been nailed in properly.  Anyway, all fixed, and good as new.  Well not really, but much better than it was.
Tomorrow, Sunday, we are heading to an agility fun match with Luna.  Hopefully we have some fun:)
On an embarrassing note, Larry informed me of some spelling mistakes on some of my posts. I guess that means he must read my blog.  Not sure if that is a good thing or not:)  He is struggling to read with his progressive lenses, which he hates, so he reads slowly.
Uggh, I hate that, the spelling mistakes that is.  I do usually remember to use spellcheck, and I do read my post over, more than once, but I read fast, and because I wrote it, I kind of know what I am saying already, so don't end up reading it as well as someone would, reading it for the first time.  The mistakes were just the odd letter missed here and there, or the odd wrong letter, and they were all actual words, just not the right words, so of course spellcheck doesn't pick them up.
Sorry about that, because I hate seeing them myself, but a lot of us make them, not that that is an excuse.....Okay I'll shut up now.
Posted by Karen at 11:46 PM