It was another decent day today.  A bit of sun trying to peek through in the morning, and then just cloudy but not raining, and actually fairly pleasant.
After lunch Larry went back out to do some more tree pruning, and Jake went with him because he knows there is more chance that Larry will throw the ball for him that I will.  Just how he expects Larry to throw the ball for him while he is up the tree or on the ladder, I'm not quite sure.  I don't care though, because then at least I don't have him pestering me.
Luna came with me, and she brought her soccer ball.  That's really a no-no down in the garden, but since there isn't much happening there this time of the year I wasn't too bothered. 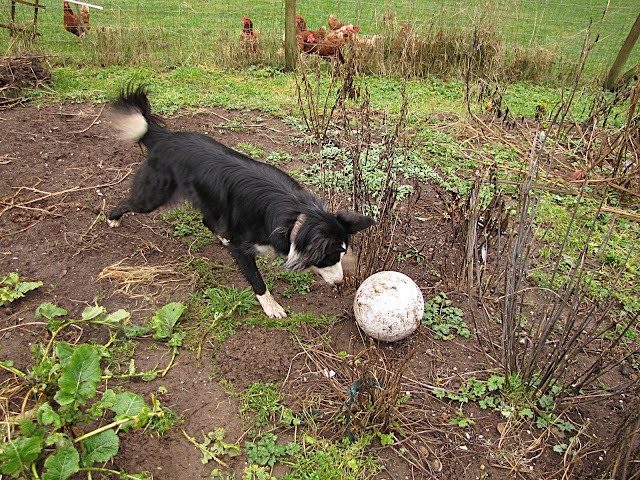 I thought I would just putter around and see what I could get cleaned up.  There are lots of dead stems to clean up, dead tops on the glads to pull out, weeds, etc. 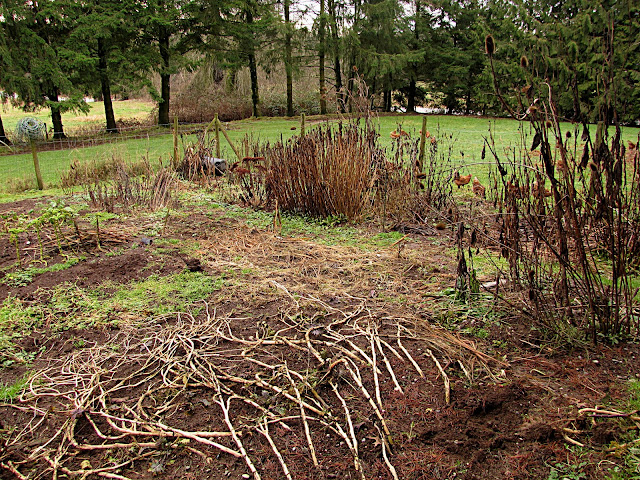 There are some signs of life though, like these new shoots of the sedum coming up. 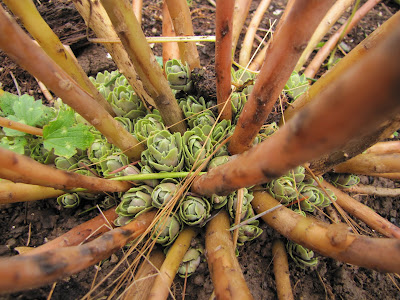 Luna played with her ball, and even when I fired it out through the gate, she seemed to manage to dribble it back in.  Eventually she looked like this. 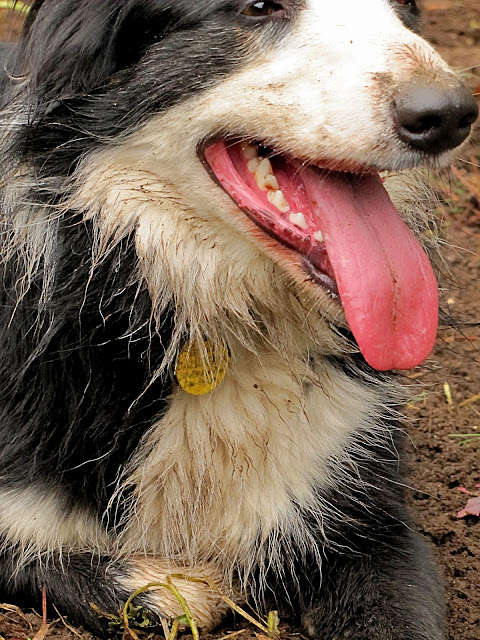 After a while Jake and Larry showed up, and both dogs took a break.  We loaded the old raspberry canes into the wheelbarrow and took them over to the burn pile. 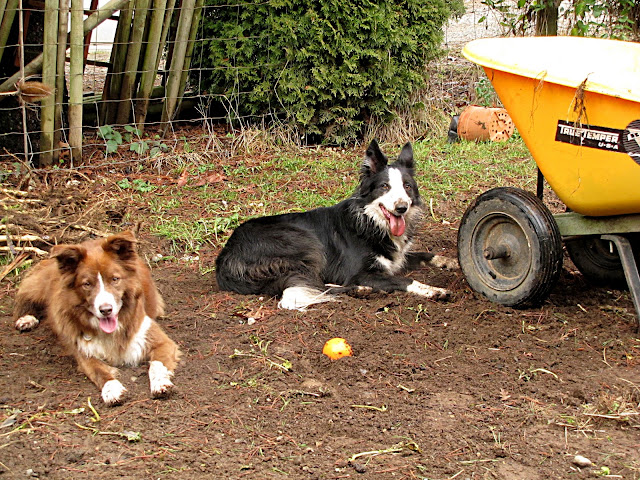 Luna took a bit of a nap, 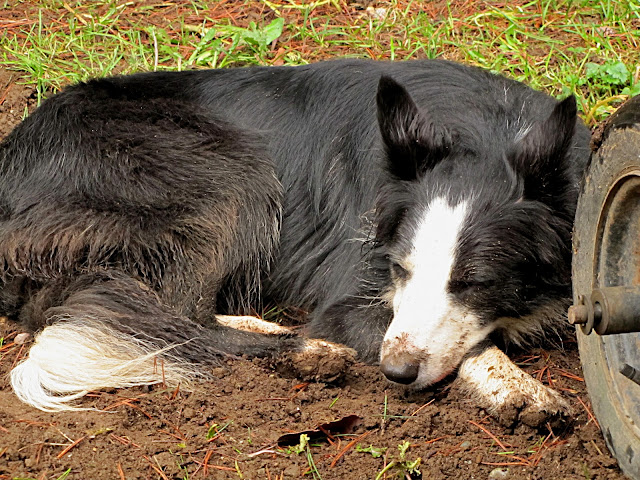 And then a bit more, 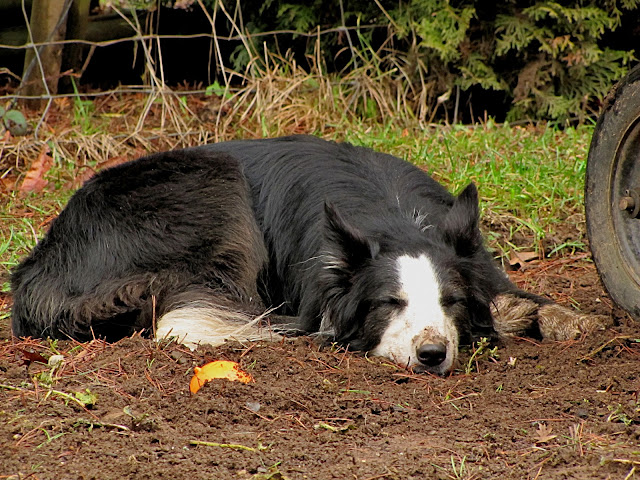 And then she was revitalized.
She channelled Calli and dug a hole for Jake's ball 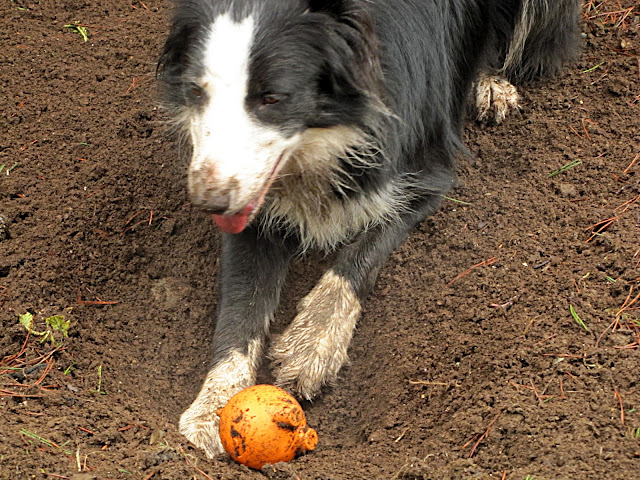 Then she straddled the hole 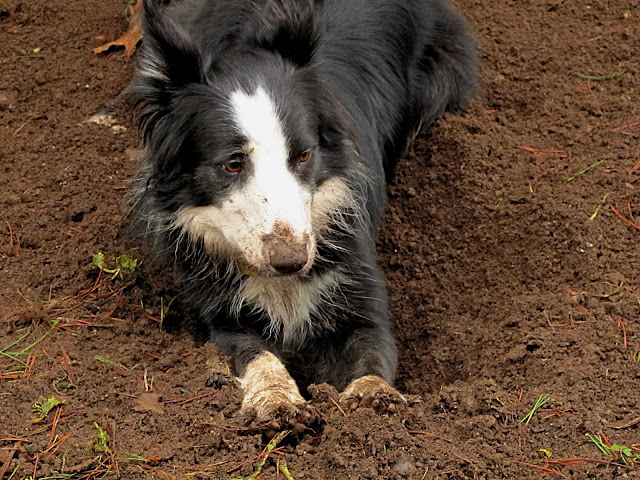 And then laid in it 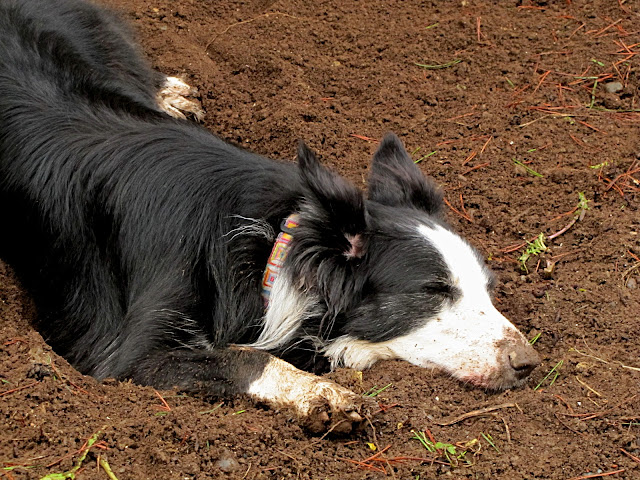 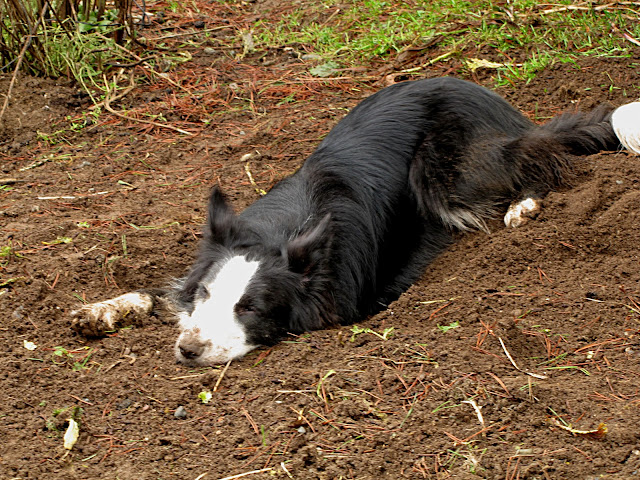 She laid to the left 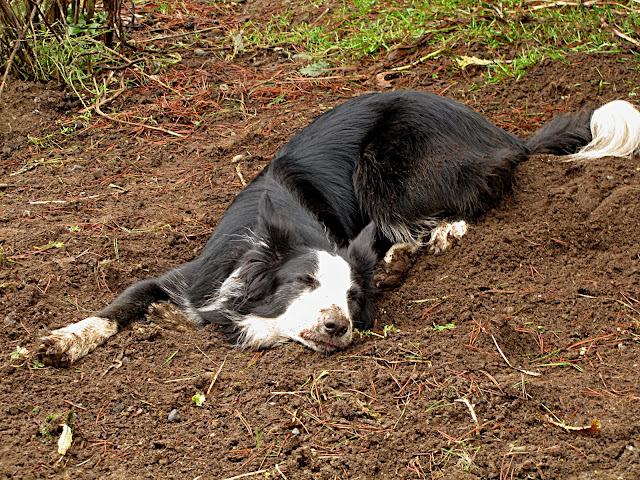 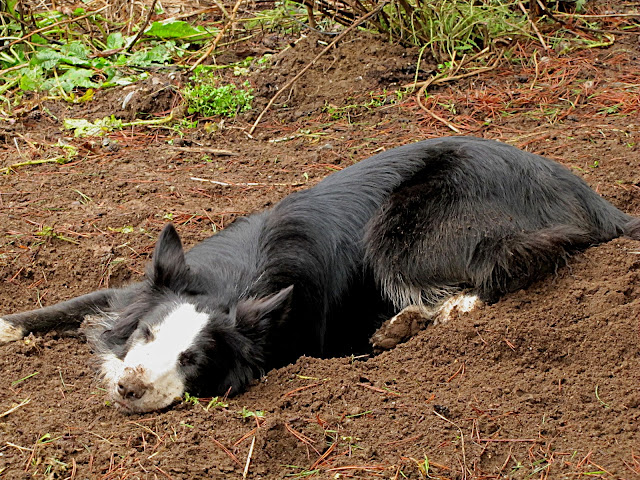 And then she laid to the right 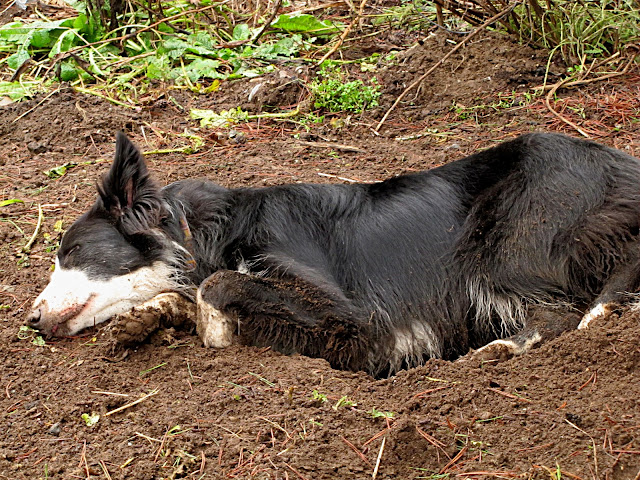 And then to the left again 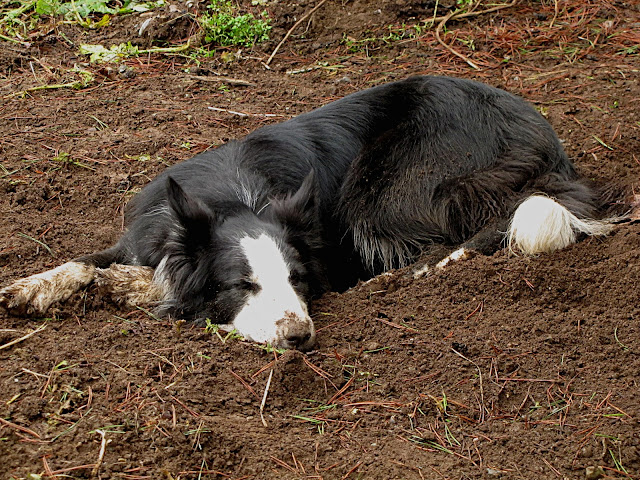 And back to the right 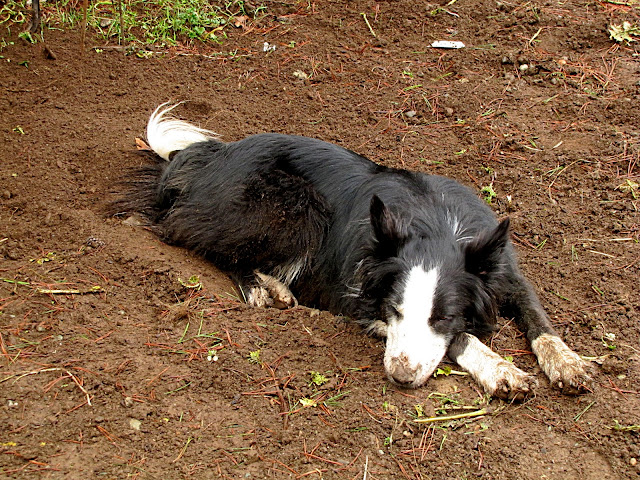 And all the while Jake stared at the ball, hoping I'd throw it. 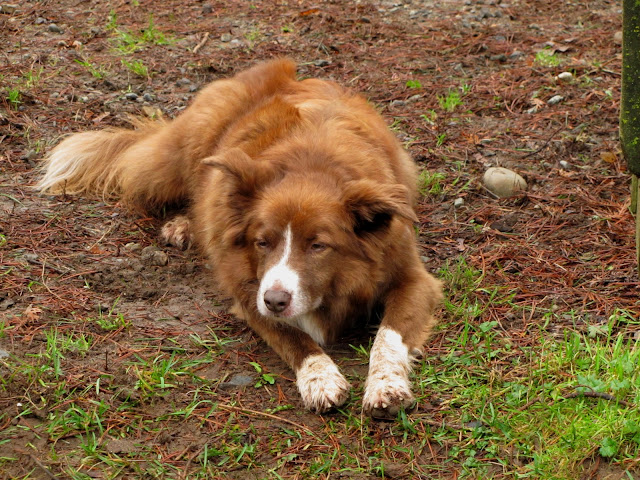 One of the good things about cleaning up in the Spring (I'm being optimistic here), is that we find tools that we lost the year before.
I don't know if there is a proper name for this thing.  Larry calls is a 'pig sticker' and I call it a 'poker stick', but I found it laid on the ground. 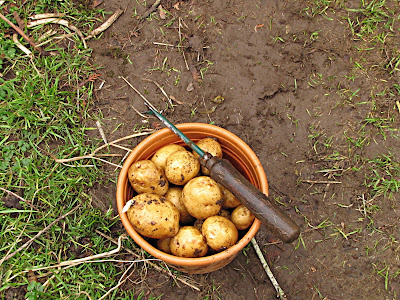 It's used for weeding, and it's handy for helping to loosen deep tap roots. We are bad for leaving tools where we were working, thinking that in a short time we will get back to finish the job, but it usually doesn't happen.  I keep saying I'm going to paint the handles of all the tools a bright colour so that we can see them when we leave them in the grass.
Another thing I found was a few hills of potatoes that got missed last Fall.  There's a few meals here:)  Some of the potatoes that were too close to the surface got frozen in the cold weather, and were mushy, but the rest looked good.  You can tell the soil temperature is not very cold, because a few of the potatoes were starting to sprout already, and my hands didn't get cold when I was pulling the weeds out.
And here's what it looks like now.  The dead kale in the foreground was pulled out, the dead glad tops removed, some weeds pulled out.  Lots more to do, but we've made a good start.  With Luna's help I'm sure to get it done quickly! 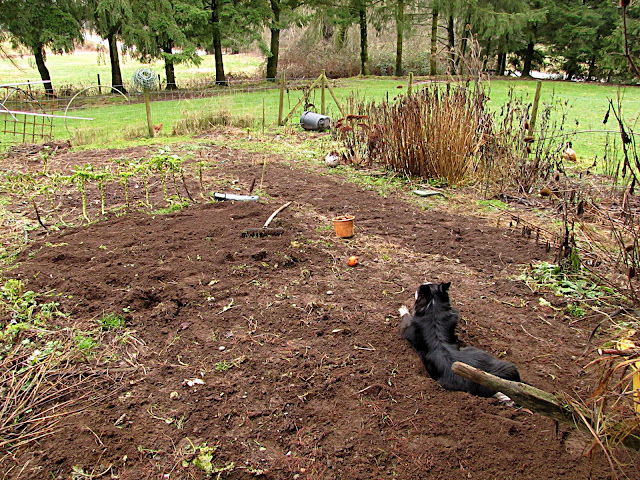 And I have to add these because they were so lovely.  We don't get a lot of brilliant sunsets here, but this was taken as we were pulling out of the driveway about 5:20 today.  It is SOOC, although Larry said it looked much better than that in real life. By the time I had run back to the house to get the camera, I had missed the best of it. 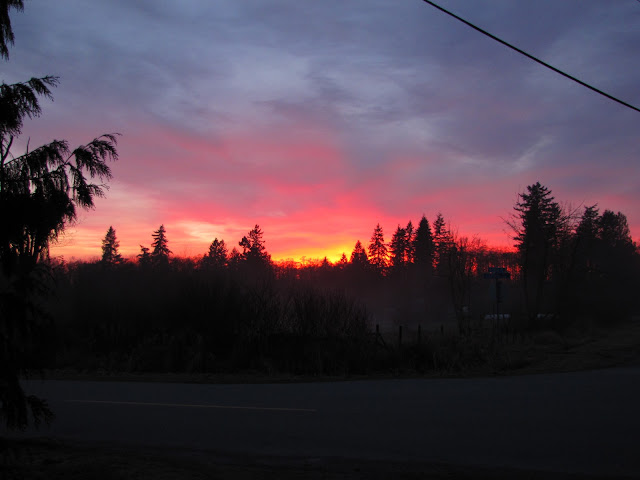 This is a 1 3/4 miles from our house, from the highest point around.  Again it's only a taste of what it really looked like. 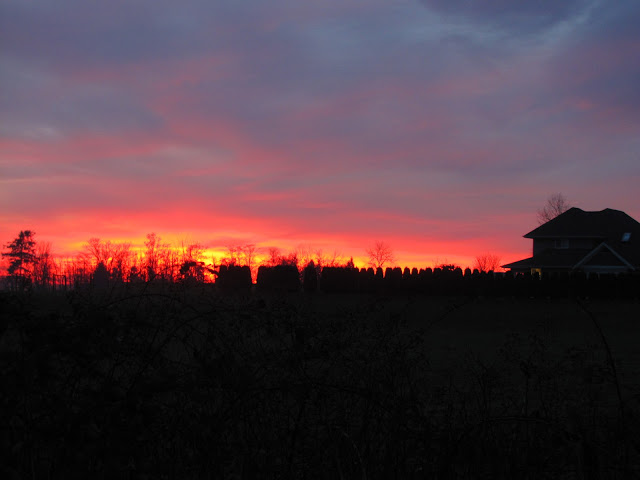