April and the other Guy, I mean Ewe

If you read yesterday's post, I mentioned about feeding grain to the two old ewes.   They aren't keeping much weight on over the winter, so I've started adding some grain to their diet.  April is one of them, she will be 15 on April 1st, and that is a very good age for a sheep.  The other one doesn't have a name, is just known as the old ewe, which from here on in will be known as TOE.  For interest's sake, the other two ewes are known as the young ewe and the fat ewe.  And, they are just 'pets', well more like grass mowers.  On days when they really aggravate me I ponder how much dog food they would provide...
This morning I got April and TOE separated and into the paddock, which means TFE  and TYE wouldn't be trying to get their share.
Here they are peering in the barn to see what is taking me so long.  And yes, we got a sprinkle of wet snow this morning, which turned to rain and is now all gone. 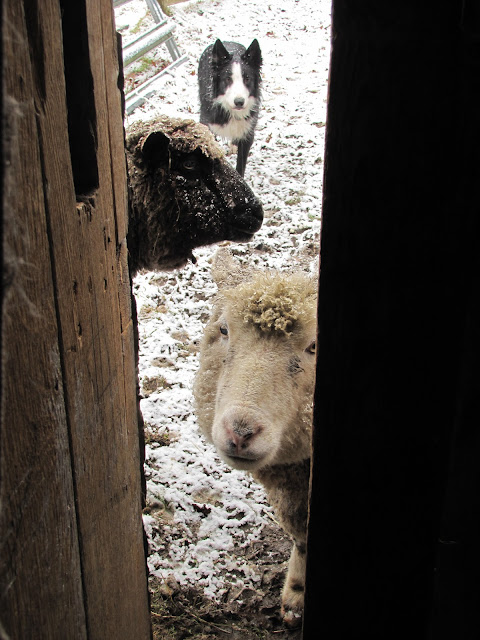 I found the perfect buckets for feeding.  Big enough that they can get their heads to the bottom, but not really big enough that another ewe could get her head in there.
Luna makes sure they behave themselves. 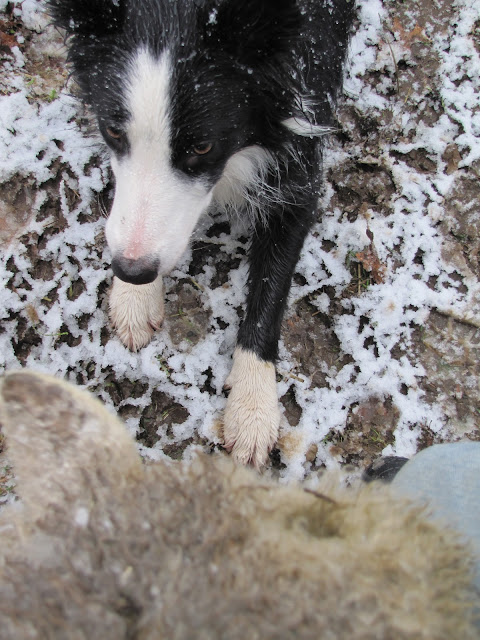 Since I only have two hands, and the camera was in one, I had one bucket between my legs, and well you can see my left hand.... 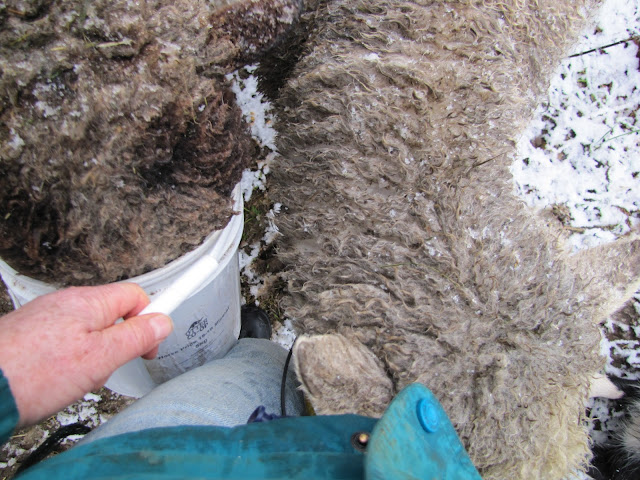 I realized I could hold two buckets in one hand, and then April pushed her head forward, and the handle ended up behind her ears.  Then it was like a feed bag or nose bag, the kind that fits over horse's ears.  Like they put on the draft horses while they are still in harness, so they can eat while they are having a rest. 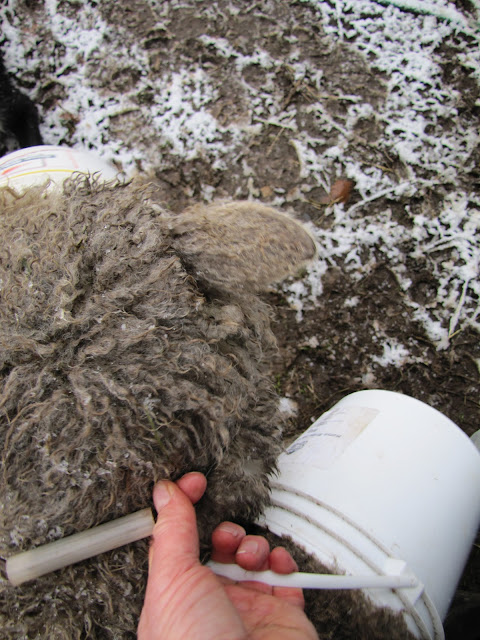 It was kind of a eureka moment.  She could still see, but she couldn't push the bucket over, and I didn't have to hold it. 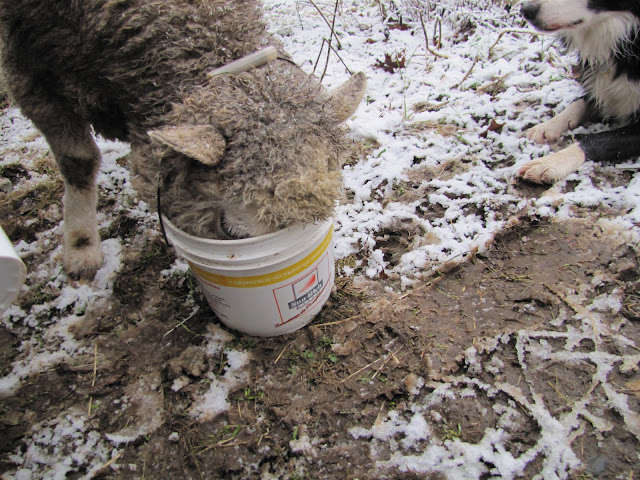 When TOE had finished hers, she tried to push April away from the bit of grain she had left. 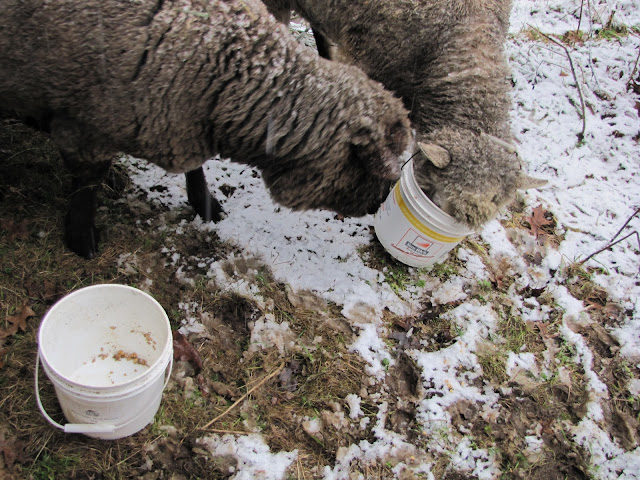 But where April went the bucket went 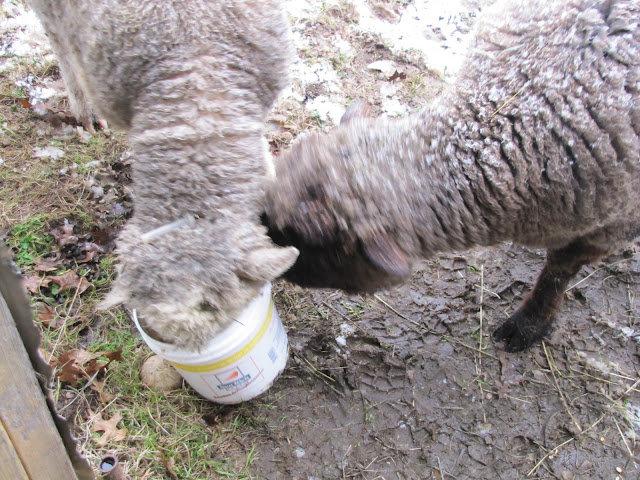 What are you looking at, you 'wolf'? 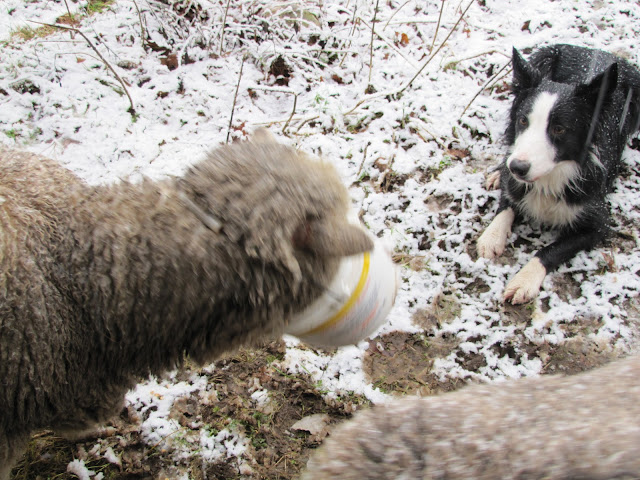 Okay,  I'm done now, you can take this big muzzle off 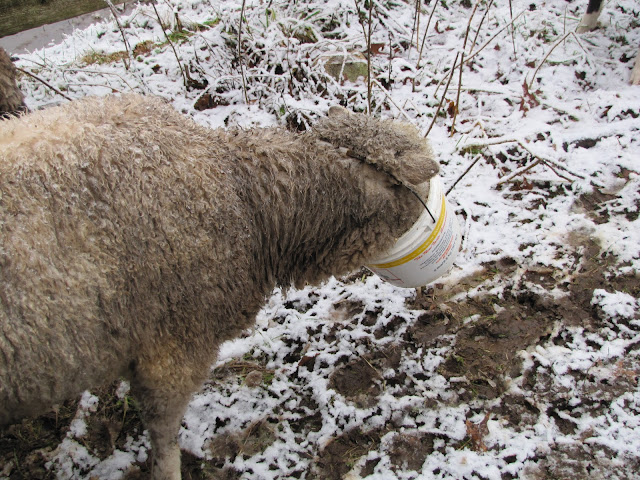 If that wolf would leave, we could go back to our friends. 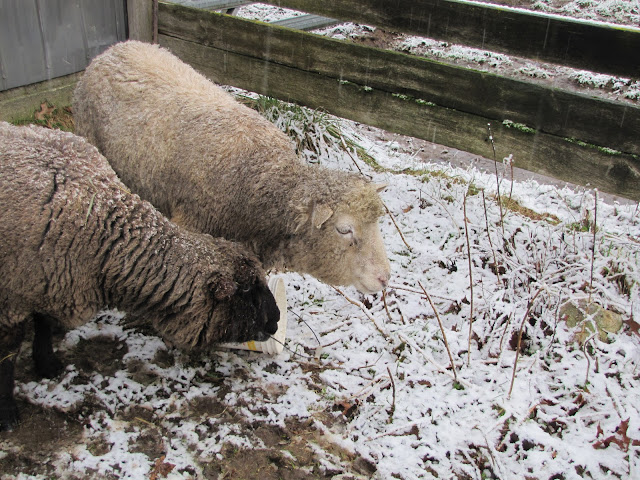