...went the trap, two nights in a row.  Figured there would be at least two rats, and we got two.


It was rather a rocky start to the war, with me dumping chicken feed all over that grid outside the door, which took the rats two nights to clean up.  In the meantime they ignored the trap under the plant pot.  Then the next night I went and left a ice cream pail of feed open in the greenhouse, which is where the young rooster gets fed.  I remembered that at 1:30 in the morning, and I sure wasn't about to get up and stagger out there to put the lid on.  I would be imagining rats running over my feet out there in the dark, yuk:(
So the next day I came up with a rather brilliant idea.  This is the first hole the rats chewed, and the rock that Larry had plugged it with, until they made the hole bigger.  This hole happens to lead right into one of the nest boxes. 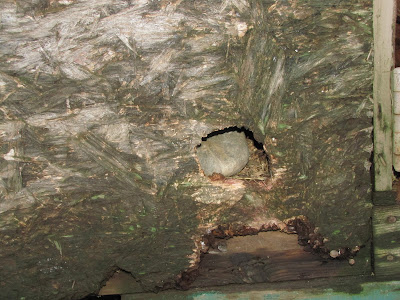 So I got a shelf from an old fridge.  Yep, we keep all sorts of junk, you just never know when it might come in handy on a farm.  Well actually it's me that thinks we might some day have a use for things like that, other family members would have got rid of them long ago.  I tried a few other things that we had hanging around, but this worked the best.  It fit pretty well over the front of the nest box, and the slots were small enough to stop a big rat from getting through.  They were also small enough that a hen couldn't stick it's head through, to try and eat the bait, which was peanut butter with chicken feed stuck on top of it.  It was open enough that a rat would think, when coming through the hole, that it could get over to where the feeder was, which was actually not there, but in the white barrel outside.  The rock was there to partially block the hole so no little birds would go in.  Yes, birds go in the chicken coop to eat the feed.  Just don't tell the CFIA, it's that whole Avian Flu fiasco.... I digress.
So I set the trap, banged in some wire staples and we were in business. 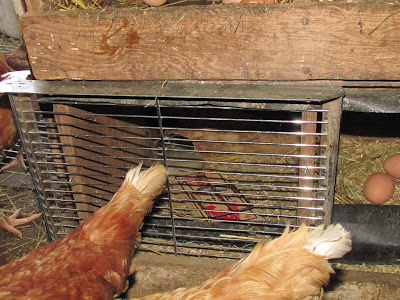 And next morning we had our first victim.  Just be thankful I spared you that photo.  And that became Larry's job to dispose of.
Tuesday morning, same thing.  'Oh Larry, there's another rat for you' 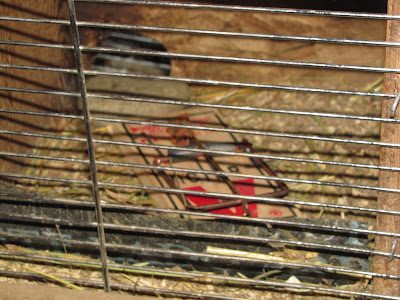 This morning he went down there to let the hens out and put the feeder back in.  I asked him if there was a rat, and he said 'yes, and this one's yours'
'Really, there's another one?'
'Yep'
I was really impressed.  Three nights in a row.  I thought rats were smart, you'd think that after seeing bodies in the same spot two nights in a row, that a smart rat would avoid that spot.  So I went down there this afternoon after the hens had finished laying.  I was just going to pull the laying boxes out from the wall and go in from the back, instead of dismantling the grid.
Before I even got started I noticed that the bar on the trap was still in place.  I thought maybe Larry had decided to be a gentleman and spare me from having to deal with the rat, so had come down and disposed of it after all, and reset the trap.
I yelled over to where he was pruning the apple tree.
Nope.
Turns out the trap hadn't been set off after all.  What he thought was a rat was the grey rock at the back.
I'm not sure whether I'm happy about that or not. I raked it all smooth in the green house where the rats had been digging holes, so will check for activity in the morning.
Maybe there will be another SNAP!
Posted by Karen at 10:44 PM