We had two farmers markets this weekend.  So of course in the previous two weeks I had spent a lot of time making jam and doing the sewing that didn't seem to get done over the summer.
Yeah right!


It always seems that on the Friday before a market, I am trying to get all the things done that I had thought I was going to get done in the previous week, or two, since the last market we were at.  I also seem to have this inflated idea of how much I can actually accomplish on that one day.
I started out well, we were back inside from our farm type chores and the walk around the bush at a decent time.  So, I was just going to have a cup of coffee and a few minutes on the computer before I got started on some jam.  I just happened to start looking at condos, for that, um, family member that needs a little help to fly the coop again.  Of course a few minutes turned into an hour or so.
I finally got my act in gear,  and got three kinds of jam made before I stopped for some lunch.  All the while I was looking out of the kitchen window at the beautiful sunny day, watching Larry going back and forth, doing this and that, and it was so nice out there he had shed his jacket and was down to a t-shirt.
And then I threw down the towel, or the ladle, or wooden spoon, or whatever, and said to hell with it, I'm going outside.
We gathered all three dogs, who really didn't need much gathering, since once they realized a walk was in the works, they were all over us.  Into the car we piled and off we went.  This time we were going to the Hogan Family Nature Reserve, which is only 10 minutes away but in the 24 years we have lived here, we have never been to.  Actually, I lie.  We have been to it, just never through it.   Years back when we used to go out on Citizen's Patrol we drove down there one night to check that no undesirable types were hanging around.  (Not quite sure what we would have done if there had been any undesirables)  It is down at the end of a narrow little road, that is more like a lane.  Basically it is probably 5 acres of bush and a creek with a rough trail through it. Since it was a nature reserve, we thought we should keep the dogs on leashes.  By this point they were beside themselves with excitement, oh wow, a new place, and there seemed to be some really hot scents.
Now I can walk the three dogs on extending leashes by myself down the road without much trouble.  Calli and Luna's leashes in my left hand and Jake's in my right.  After we have been going a few minutes, Calli is usually near me or a bit behind, Luna is towing leading me down the road, and Jake is out in the middle of the lane to my right.  No matter if you walk with the traffic or against it, he always wants to walk out on the road.  Good thing our road is relatively quiet, but he does know what 'car' means, and will move over onto the shoulder if a car is coming.  Most of the time it is like a well coordinated dance.  I can press the button to stop one dog from veering off course and under another dogs leash, which is usually Jake dashing over to pee where one of the other dogs just went.  I picture it as like a maypole dance, which both David and Meredith did in elementary school as kids, and we watched for many years as part of the Mayday celebration.

I'm the pole (although not tall and slender, well maybe thirty years ago..) and the dogs are the dancers at the end of the ribbons, and it usually works with relatively few tangles.  When Larry and I walk together, which is most of the time, he walks on my right (you know, very chivalrous to protect me from the traffic) and he has Jake, who is out to the right flirting with traffic.  I have Luna and Calli, and quite often I am to be seen with my left arm stretched back as Calli stops to smell something, and Luna is straining ahead to get to the next smell.  My sweaters all seem to be short in the arms now.  So for the most part the 'Maypole Dance' works pretty well.


Once we headed into the little park with it's rough, narrow trail, it was a disaster.  Two people, three dogs, extending leashes, hot smells, trees and shrubs and branches and logs and.....well we spent the first half of the walk unwinding our selves from leashes, dogs from other dog's leashes, leashes from branches and bushes.   I just had to laugh.  I couldn't imagine what a non-dog person would have thought if they'd seen the mess were in.  The chances of meeting anyone else were next to nil, thank dawg.  We probably wouldn't have even been able to get off the trail to let them by, as we would have been too tangled up.  Anyone that has seen our three 'well behaved' dogs hanging around at our booth at the farmers market would have had their bubble burst if they could have seen us there.  Finally, after 10 minutes or so, the excitement died a bit, and the second half was relatively under control.  Before we knew it, we were at the end of the trail.  One of those 'been there, done that' and it will probably be another 24 years before we go back.

The walk was so short that we continued on to another nature park where it was open field, and the dancing was more under control, and we could unwind a little bit:) 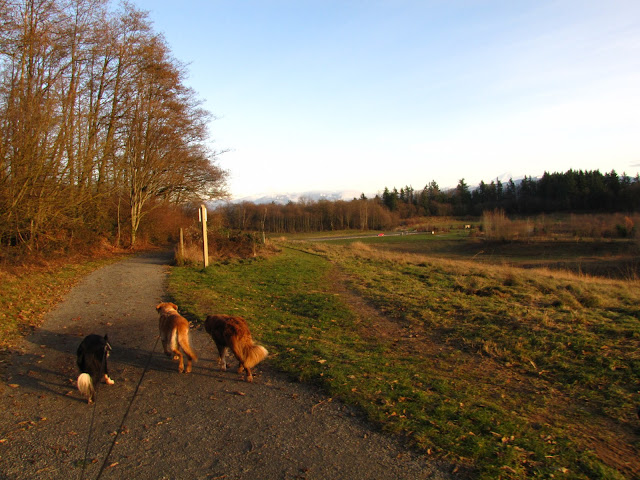