Pippin came to stay at our house last night.  Jeff, his 'dad', hasn't seen him since Tuesday morning, so he's really wanting to know how Pippin is doing.
Jeff, Pippin is doing just fine!!  There, you really don't need to read any further:)
Okay, if you really want to know, here you go.
After the girls left here last night, Pippin seemed kind of lost.  He whined, and he barked, and he stood at the door and said please let me out, I'm sure I can find my way home.
He wandered around and checked things out, and a couple of times he even went downstairs and laid in his crate all on his own.  He seemed kind of sad.  Well sad until I tried shutting the door, and then it was bark, bark, bark. 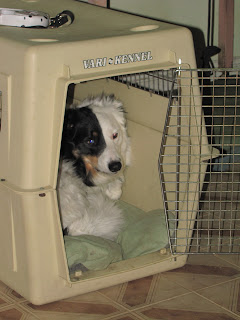 We had brought his red blanket upstairs for him to lay on.  To distract him, Meredith, who Pippin knows the best, started to play with his blanket with him.  Next thing you know, there is one big game of tug going on, and Meredith is frantically trying to rescue the blanket, and... well... you can see for yourself.
Jeff, you can blame the vampire eyed Meredith! 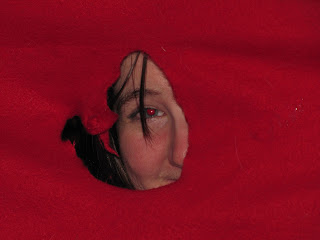 So we found something more appropriate to play tug with

And then Pippin got some lovin' 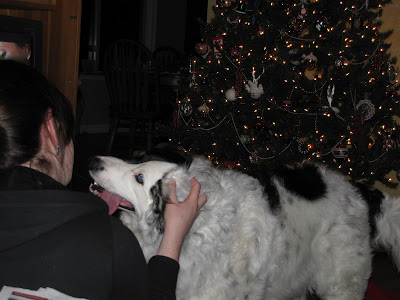 It was all going well, until Meredith was heading to bed.  Pippin was laid in his crate.  Meredith was sure she had shut her bedroom door.  She was in the bathroom long enough to wash her face and brush her teeth, and when she got back to her room.... there was Pippin just finishing off a Terry's Chocolate Orange.  She couldn't believe it!  It was like he had already checked out her room and was waiting for his chance to sneak in there.  She was shocked he even found the chocolate.  Anyway, we googled and found this chart, so we put in Pippin's weight, which we didn't know, but he is kind of portly, so we guessed at 60 lbs.  He is the same height as Luna, but a lot rounder, and she is around 40 lbs, so I thought 60 lbs was a fair estimate.  Thankfully the chart showed that taking into account his weight and the weight of the milk (thank goodness it wasn't dark) chocolate he had eaten, he was still below the level of 'vomitting and diarrhea'.  We figured we would just keep an eye on him, knowing that he has probably eaten worse things in his lifetime.  Did I mention that Pippin is obsessed with food, and not much stops him from finding and getting anything edible?
Pippin didn't have a very relaxing night, (not because of the chocolate) and neither did Meredith and I until I went back downstairs and changed his sleeping arrangments, and then it was much better.  And Larry of course slept through it all.
So far today Pippin hasn't eaten anything inappropriate, well that we know of anyway.  He didn't even seem to show any interest in the horse manure this morning.   He did get a smaller breakfast, considering all those calories he had downed the evening before, and wasn't impressed with the raw carrot I added to his dish to make it seem like there was more, but did like the turkey juice that I poured over it.  I even added a couple of bits of raw turkey from what I was feeding our dogs, and he picked them up and dropped them a few times before he ate them.   And for a dog that always seems to be on the hunt for food, he is a suprisingly delicate eater, taking his time.  Not like our three.  I wonder if that comes from being an only dog?
This afternoon we took a walk down on the dyke between rainstorms 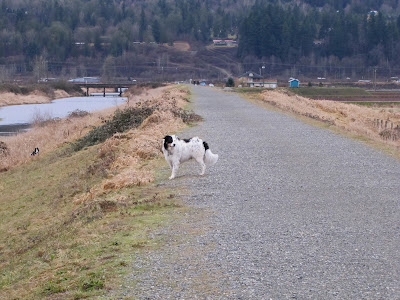 I made sure Pippin knew I had good treats in my pocket.
Did I hear you say treats?  I'll be right there.... 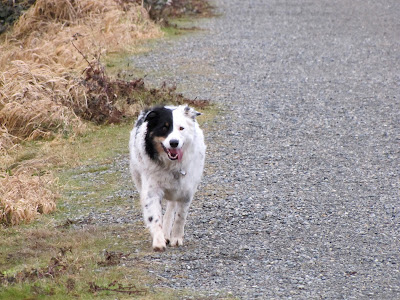 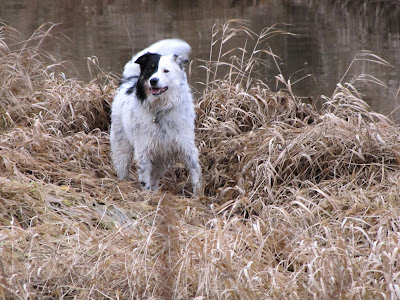 And here's Luna and Pippin having a good rip snorting run around.
They were having a great time!
Posted by Karen at 6:52 PM