My true love said to me.... 'turkey...again....?'  Well not really, but now since most of the easily sliced turkey is gone, it's time to strip the carcass and see if there's enough to make a turkey pot pie.  Mmm, really good, but actually I thinks it's the pastry crust that we really love.
We only had a 12 lb turkey, and I have to confess it wasn't one we raised ourselves, or even an ethically or organically raised one.  It was just an on sale utility turkey.  This one didn't seem to be missing any body parts, but the skin was ripped across one breast.  A turkey style 'wardrobe malfunction'.
In the newspaper the Wednesday before Christmas there had been a recipe for brining a turkey.  I read it, thought about it, and did nothing more.  On Christmas Eve morning I was at the grocery store getting a few last minute items.  Well a few items had turned into a basketful.  As I was stood in the lineup at the checkout there was a younger couple behind me with just three items, so I said they could go ahead of me.  Then I noticed he had a box of Kosher salt in his hand, so I asked if he was going to brine his turkey, and he said yes.  So we had some discussion about that.  He had done it at Thanksgiving and apparently their guests said it was the best turkey they'd ever had.
To cut a long story short, I decided to brine ours.  I used the recipe in the newspaper, which said not to rinse the brine off, and the guy at the store said to rinse it, so I rinsed it very quickly.  Anyway, David said it was the best turkey he had had, Larry liked it but thought it a bit salty, but then he is really trying to watch his salt intake, so that might have something to do with it.  I thought it was really good also, so I think I'll do it again next time.  Moister, more flavourful, and cooked faster.
We aren't big meat eaters in this family, so that turkey fed us well for three days, and so did the rest of the leftovers.  All that prep for the Christmas meal pays off because no-one (well that would be me) has to cook for the next couple of days.
David's lunch of leftovers on Monday 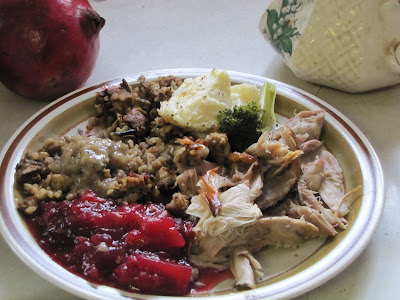 This year instead of making cranberry sauce with just water/juice, sugar and cranberries, I threw in an orange or equivalent (a can of mandarin segments) and an apple for each bag of cranberries.  It was a nice change.
The stuffing (which is what I always called it) or dressing (as Larry's family called it, and for some reason that always aggravated me) was a mixture of all sorts.  Sweet and wild rice, whole wheat bread, onions, carrots, celery, eggs, raisins, walnuts, seasonings, orange juice,  it was a meal on it's own.  I just read the other day that it is called stuffing if it is stuffed in the turkey, which I used to do, or dressing if it is cooked outside of the turkey, which I do now.  I don't care, it will always be stuffing to me.
A family tradition is to make this trifle, I've had it most Christmases since I was a teenager. Huh, really? That is one heck of a long time ago, I don't think I've eaten it that many times.  Whatever, it's a family tradition now, and it seems to have become Meredith's job.  We didn't even eat any on Christmas Day, as we were too full.  It's all gone now. 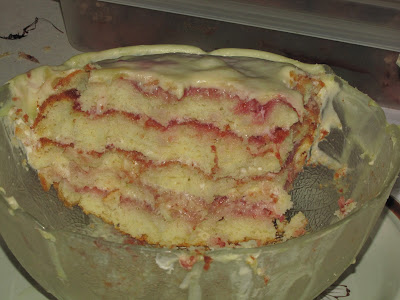 This was another highlight of Christmas.  It was given to us by one of our 'business partners'. It gave me a really good excuse to not do any Christmas baking.  I wish I had a really good excuse not to have to eat it all.  It's all gone now too.  So is all my chocolate.  Good thing, according to the pictures taken of me. 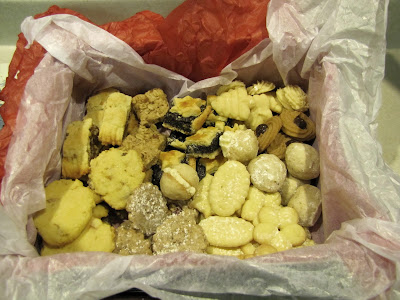 Here's supper tonight.  There were no leftovers 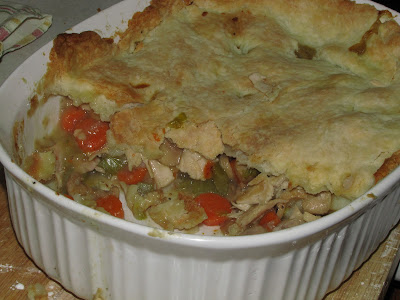 Tomorrow night will probably be turkey soup, and then the last bits of turkey that we don't want to eat will be dried for dog training treats.
I can feel all smug, because this time I've dealt with the turkey carcass appropriately, and not much will be wasted.
I won't tell you about the times I've left it in the fridge so long that it had to be thrown out, or the times I've actually boiled it up to make stock, and then haven't gone any further and that whole pot of stock and carcass had to be thrown out.
Maybe I shouldn't feel so smug.  That soup isn't made yet, and the stock isn't strained.  I'll let you know when it is.  If you don't hear anything, you'll know I messed up once again.
Today is my 200th post.  I can't believe I could ramble on so much:)
Posted by Karen at 11:37 PM