Damn, we have rats.  I guess on the bright side, they are causing issues outside, and not in the house.  Not that we've ever had rats in the house, shudder.

There is a rat or rats hanging around one of the chicken coops.  I guess they've settled in for the winter somewhere, and have figured that the chicken coop has an endless supply of food for them, and what the heck, what more can they ask for.  The door is closed at night, well no problem, we'll just gnaw a hole through the wall so we can get in and help ourselves.  Since the walls are made of that OSB stuff, and it is rather weathered and old now,  they aren't much of a hindrance. 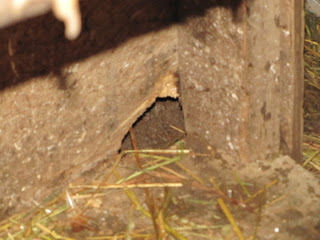 When we had this same problem a few years ago, we found that the only way to solve it was to take the feeder out of the coop each night.  We tried a trap, which killed a bird, but the rats ignored it, and so ended up using poison.  Which, I know, I know, can be really dangerous with other animals around.  What we did was to put a block of poison in an ice cream pail, with a lid on and two holes cut in the side.  The rats would go in to eat it, but didn't seem to try to drag the block out.  We would put the bucket out at night when all dogs were safe inside, and pick it up in the morning when we went out.  The only way we could get the rats to eat the poison was if we put the chicken feeder somewhere they couldn't get at it.  What we did was to put it in the blue barrel outside the coop that we use to store the bags of feed.

This time around, that barrel is full to the top with feed, so nowhere handy to put the feeder. (The thing weighs 45 lbs when full, and is awkward, so not something you want to carry too far).  Larry figured if he jammed a thick piece of plywood over the hole, it would stop the rats from getting in the coop.  It all looked good from the outside, but the next morning I noticed from the inside that there was still space to get in.  So I changed the board, but yesterday I noticed they had gnawed more on the underside and got in once again.  Meanwhile there was a trap set up outside under a propped up plant pot (to keep the birds safe), but it seems that they prefer chicken feed to cheese.  I was going to use peanut butter, but ours was really runny and messy, so I went for the easier cheese.  So last night around dark, we are out there getting the chickens in so we can shut the door.  We came up with the idea of bringing another barrel down to the coop, and putting the feeder in there.  Those feeders are a central tube that suspends a tray underneath by means of three wire clips.  The clips attach to some slots on the tray.  You put the clips in whichever slot works best for the food you have, to allow gravity to make it fall down the tube and keep the tray filled. The whole thing must be hung up by a handle, and gravity keeps it all working. 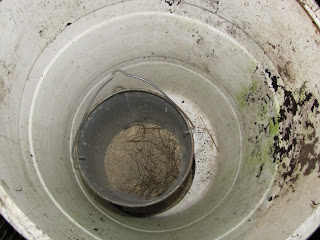 Well, as I am heaving the 2/3 full feeder out of the coop, one of the clips gave way, the tray dropped on that side, and feed poured out all over the aluminum grid that is outside the door, as well as some falling under the coop.  We scooped up what we could, swept up some more, but there was no way we could get it all.  We even encouraged the hens to come out and peck up some of the feed. 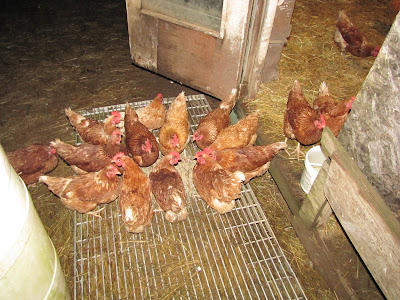 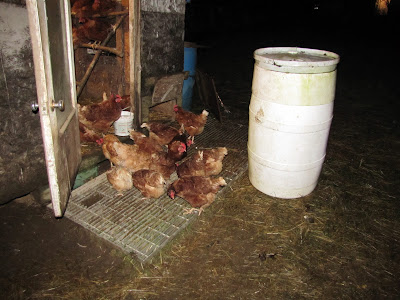 In the end we had to leave it, hopefully the rats feasted on that instead of chewing another hole into the coop to get to the feeder, which of course wasn't in there.  We had blocked off the hole with some bricks, both inside and outside.   The trap was set again, but it will probably ignored.  Unless of course they want a little wine and cheese to finish of their meal. 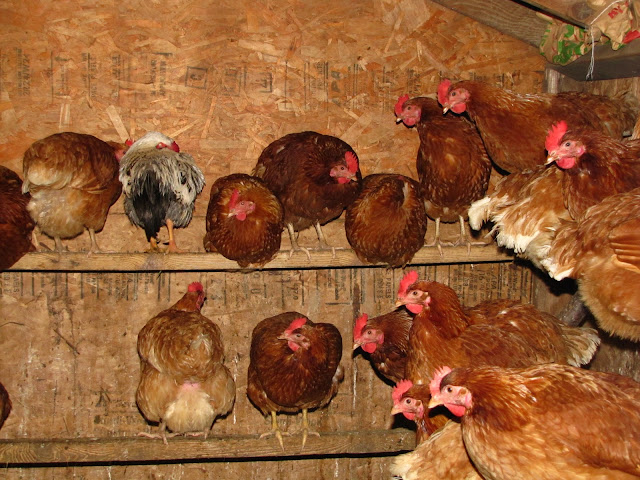 Now that we have a solution for putting the feeder somewhere safe at night, we WILL get those rats.  It's up to them whether they go for the quick death of the snap trap, or the maybe unpleasant death of poison.

This morning when we went out, they had gnawed around the first hole they had made, which Larry had jammed a rock into to block it, and got into the coop again.  At least there was nothing for them to eat in there.  They had been around the spilled grain outside, which now is just wet mush, and eaten some of that.  Hopefully the chickens will clean that up today.  The trap of course was untouched, but I might try baiting it with chicken feed tonight.  Larry saw one of the rats in the greenhouse last week, he said it was pretty fat.

Just add the job of replacing some of the wood on the coop and making it more rat proof, to our long 'to do' list.

Sometimes a house on a lot with no farm animals starts to seem really appealing.
Posted by Karen at 1:03 PM