If you have ever been to the Pacific National Exhibition (PNE) here in Vancouver, you will have heard that refrain more times than you care to count.  There are ticket hawkers everywhere, selling raffle tickets to the prize home, and they also give a car away a day.  This year was the 100th anniversary of the PNE, which runs for 17 days, the last one being today. (Okay, yesterday.  I was having trouble loading pictures last night)
It originally had a big agricultural section, but over the years that has got smaller and smaller.  There is still a bit of a horse show, and a large 4H component at the beginning of the fair, but other than that the agricultural part is mostly displays now.

Animals both fake and real 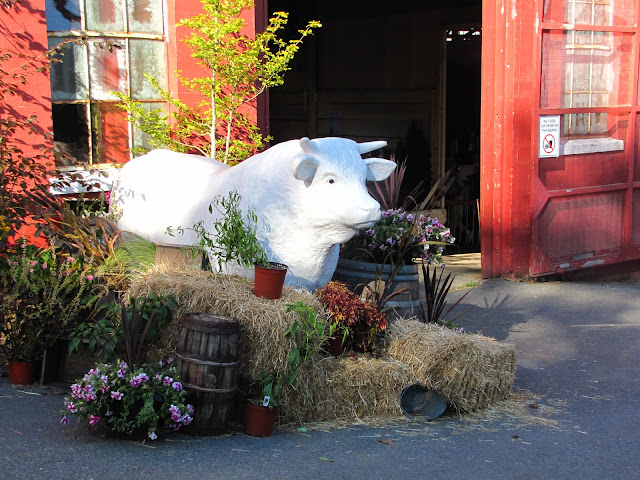 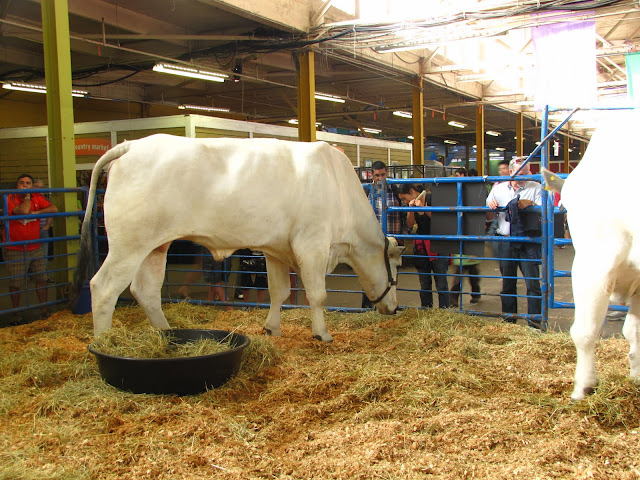 In my late teens and early twenties I spent a fair bit of time at the PNE watching the horse show, and found out if you got there early enough in the morning, there was no one around to collect a parking or admission fee.
In the past 30 years or so we certainly haven't been there a lot, but I felt the urge to go again this year, so we went last Wednesday.  Wow, two field trips in one week!
The highlight of the fair for me now is the Superdogs.  A glitzy, hollywood style show, but fun to watch, and even more fun when you recognize half the dogs and handlers from agility trials. 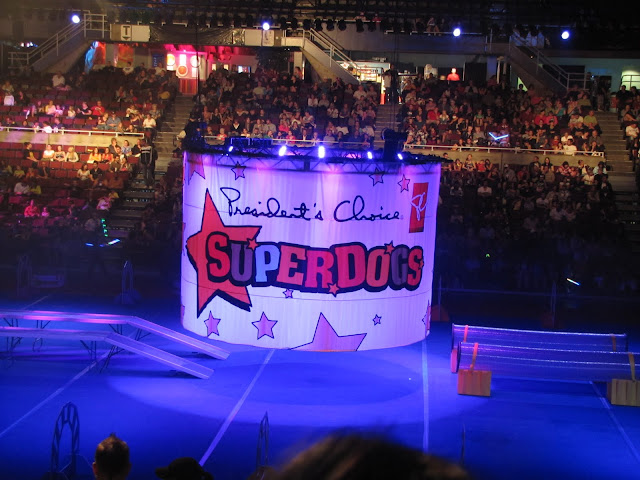 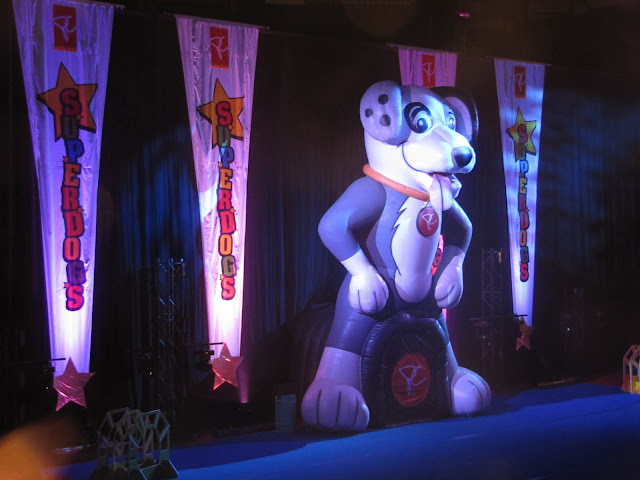 One of the big things with the PNE is getting parking.  It is held in the middle of the big city, so parking is at a premium, and at $20 (so I heard) to park in one of the close lots if you are lucky enough to find a spot seems a bit steep.  All the streets close by are posted with 'resident only' parking signs, but we parked just beyond where they ended, and walked in, about a 15 minute walk.  Free parking and some free exercise!
The first thing we hit was the Super dog show, and then after that we lined up to view the prize home.  Thankfully the line up was quite short.  The weather was perfect, not hot, but sunny.
The prize home was nice, really liked the downstairs, but not so thrilled about the upstairs.  Huge master ensuite, with large glass shower and separate tub.  What I didn't like, and I've seen this in other homes too, is that the toilet isn't separate.  Come on, don't most people like some privacy while sitting on the loo?  I mean, the bathroom was so big, it was meant to share, but.... Well I certainly wouldn't want to be in there if someone was using it, and there was a TV that could be turned so that loo user could 'view on the loo'. I'll bet that was a man's idea.  Granted though, you could swivel the screen and watch from the soaker tub, but it was a small screen and the tub was a long way away.
Then there was a fireplace at the other end.  The weird thing was that the fireplace wasn't really viewable from the actual bedroom, where, at that end of it, there was a sitting area with a wine fridge.  Wouldn't it have made more sense to have the fireplace there rather than in the bathroom?
Well, don't have to worry about it, as we didn't buy a ticket.
Later though, visiting the hot tub vendor, we almost got ourselves talked into buying a two person hot tub like the one that came with the prize home.  They were called Tublicious and it was tempting.  I don't know, if we got a hot tub, I don't think our daughter will ever leave home!

After that we headed to the Peking Acrobats, which were really quite good.  We killed a bit of time and then went back to catch the evening show of Superdogs, which was more entertaining than the afternoon one.  I have lots of video of that I might try to post later.  There's a different view of the Superdogs here

After that show was over we hung around and watched Jesse Cook for a while.  I had never heard of him, but he was a fantastic guitar player, and I felt like banging my feet on the floor and clicking my castanets, and flipping my flamenco dress.  Well, in my mind anyway...

By this time it was dark, and we saw an Elvis impersonator and then went through a mostly weird art exhibition, well other than a couple of things like this, a really cool water fountain. 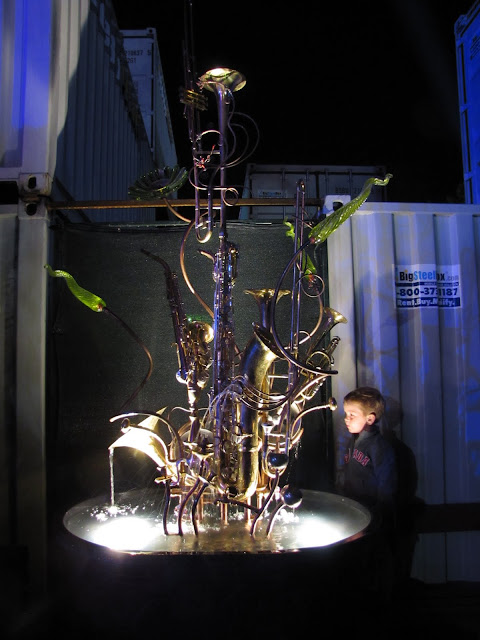 We wandered up the midway, probably a couple of the older people in that section of the fair...:(  I had been on the lookout all day for a fake hair visor, which I had never heard of, but had been introduced to by Suzanne in California, here and here (you have to scroll down a long way, and then read the comments as well).
No luck.  In fact I don't think I saw a visor of any sort, haired or hairless, and even ball caps were in short supply.  We went past a booth called California Activewear, but nothing to be seen there.  The only thing that came anywhere close to weird head gear was this, and I didn't want one. 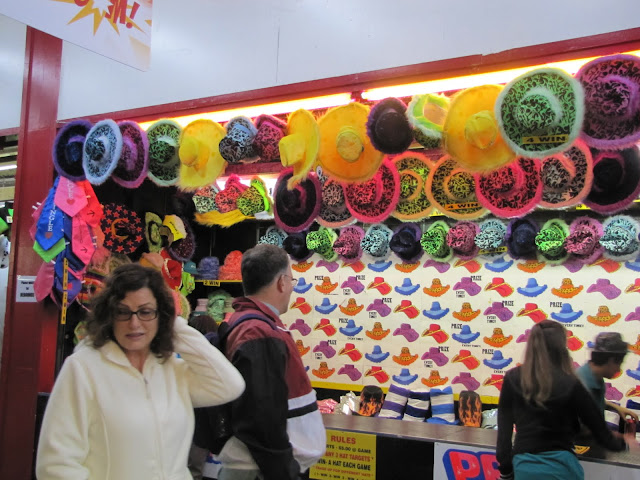 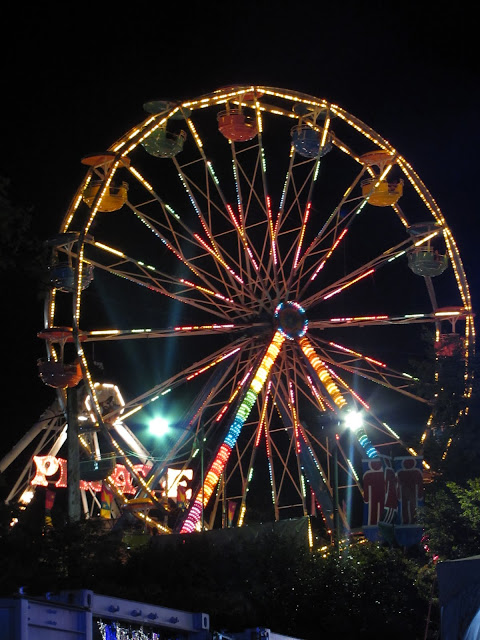 I was quite fascinated watching a booth where people attempted to climb up this rope ladder that was more horizontal than vertical.  Everyone lost their balance and the ladder swung around and they were dumped off.  We did see the operator make a successful climb, and tried to take note of where he put his feet and hands, but he was too fast.  The prize at the top of the ladder was an I-Pad, but I don't think they had to give many of those away in a day.
By this time it was quite cold.  We got ourselves seats for the Kaboom show that was a mixture of pyrotechnics, dancers, and video clips on a screen.  It was really good, and the best part were the balls of flame blasting out now and again.  They sent a waft of warm air over our way every time, much appreciated:)

By the time we had hiked back to the other end of the fairgrounds, and then the 15 minutes to our car we were all warmed up, and were home by midnight.
Posted by Karen at 11:02 AM