Poor Smudge, she doesn't get any air time at all in this blog.
Smudge is an inside/outside cat, and this summer she seemed to be living off the land, only occasionally showing up for food. Now that it's getting cooler, she's back to her usual pattern, which unfortunately, is meowing at the edge of the roof that ends just outside our bedroom window at some doGforsaken early hour of the morning.  She comes up the back steps, across the deck, through the railing, onto the lower roof, over the peak and then along the front of the house to where the roof ends, just out of reach of our bedroom window.   And, since I'm the lightest sleeper, it's me that hears her, and depending on how I am feeling about being woken up, I stagger out of the bedroom, round to the living room, and let her in the window.
Last spring I got a cat door at a garage sale.  Larry fit it into a piece of wood and we set it in the window where she gets let in.  We propped the door flap open so she could get used to coming in and out.  Well she is such a freaky cat, that she would have nothing to do with the cat door.  A can of tuna wouldn't coax her through it.  She would be meowing outside the window, I'd prop the flap open, and she would not come through that opening.  I used to get so fed up of waiting I'd stick my arm out and grab her by the scruff, and try to bring her through.  She would brace all four legs on the outside and I couldn't get her in.  We just gave up.  So now we are back to the usual routine.  At least this morning she waited until it was light.  It's not even like she's out hunting all night.  You find her curled up in the hay in the barn.  Why she can't just stay there until a decent hour....well, she's a cat, I think that says it all. 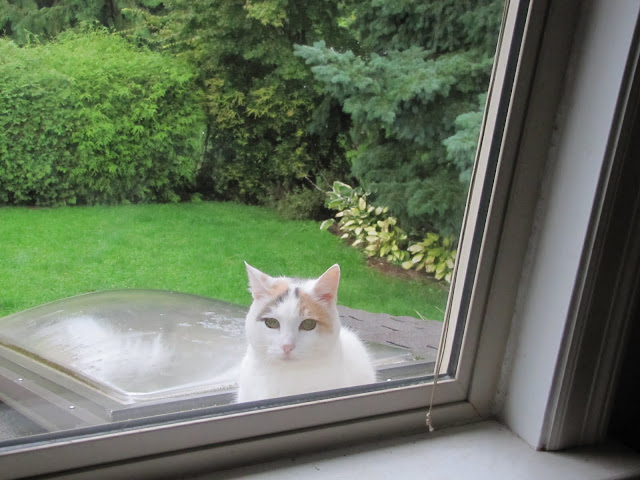 And come to think of it, given the The Great Deck Project, it's amazing that she was brave enough to walk across the tarp on the deck to get around to the window.  Desperate weather calls for desperate measures I guess.  She also is scared of the camera, so she is checking me out here.  If she was inside, she would have bolted when I got the camera out. 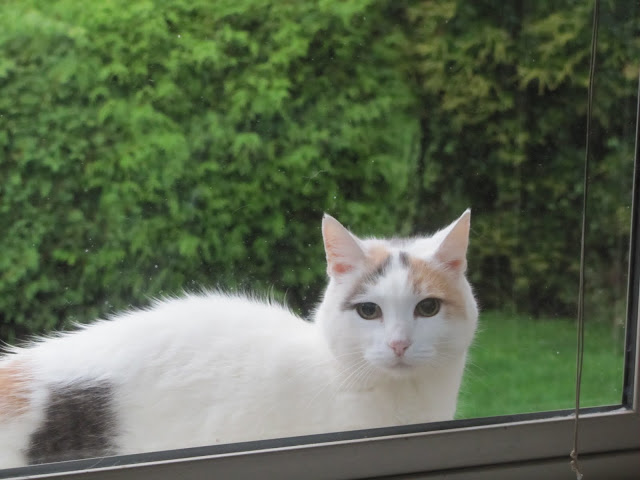 When we adopted Luna, we were told that in her foster home she just went and sniffed their cat, and then left it alone.  Not here, she fixates on Smudge when she is not moving, and stalks herds her when she is.  When Smudge comes in early, she makes a bee line for the stairs, tailed by Luna. 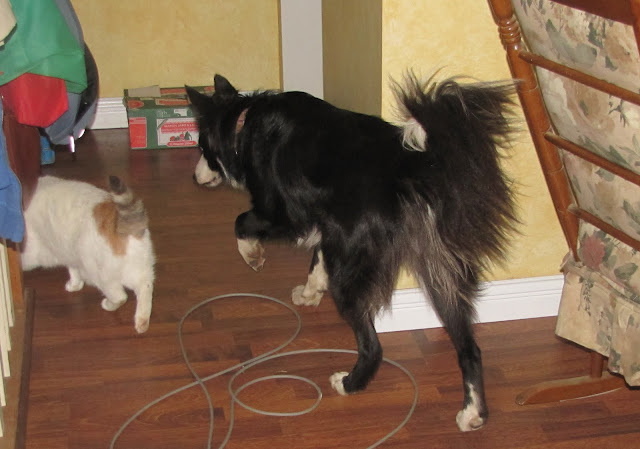 At the bottom of the stairs she meows and scratches on Meredith's bedroom door to be let in.  And I feel a sense of satisfaction that someone else also has to get out of bed for our darn sweet little cat!
Posted by Karen at 1:05 AM