Actually, according to the BC building code, it is officially a balcony, as a deck is over an enclosed space, and ours isn't.  Anyway, deck or balcony, let's just call it a mess.
When we added on to our house, which we did almost all ourselves, we built this deck.  We covered it with one of those paint on rubberized coatings.  Looked lovely to start, but for whatever reason (most likely the plywood wasn't dry enough), it wasn't long before it started to fail.  When Calli was a puppy 10 years ago, I remember her finding an edge and pulling some of the coating off.  We didn't do anything to repair it, and now look at it.  Almost all the coating is gone, and yes, I'm embarrassed to say, that is a big hole. 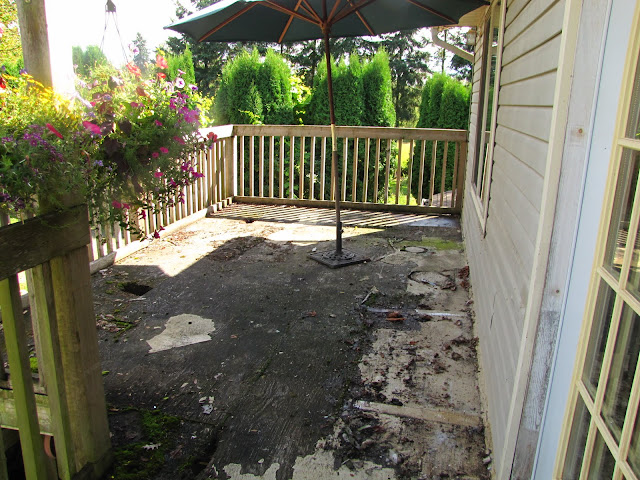 Not sure about Larry, but it was on my 'to do', or more like ' to get done by Larry' list, since I was busy doing other things.  And I'll have you know, at any other time, I would have been right in there too.
The first step was to remove the 'junk' that had accumulated.  That included some drywall under tarps from the stalled bathroom project, as well as an old barbeque that hadn't been used for a few years (we are really not the barbequeing types).  Since the stuff hadn't moved for a while, the wasps had nested under the tarp, under the barbeque cover, and behind the corner post.  Larry got stung three times, he was not a happy camper   deconstruction worker.
The next step was to remove all the handrails.  Larry was impressed with the fancy angles that had been cut into the posts to hold the railings, as some of the corners were not 90 degree angles.  I informed him that it was me that cut those, and weren't they good!
All the crashing and banging, hammers hitting crowbars and cat's paws (the tool, not the actual cat), was too much for Luna.  She wanted in, and she went to the far end of the house, as far away as she could get, and laid on some scrap fabric in my sewing room.  This is a dog that is not scared of thunder, the vacuum, the hose, the lawnmower, the rototiller, and tries to herd a horse that weighs 25 times as much as her, but she turns into a wimp when there is banging. 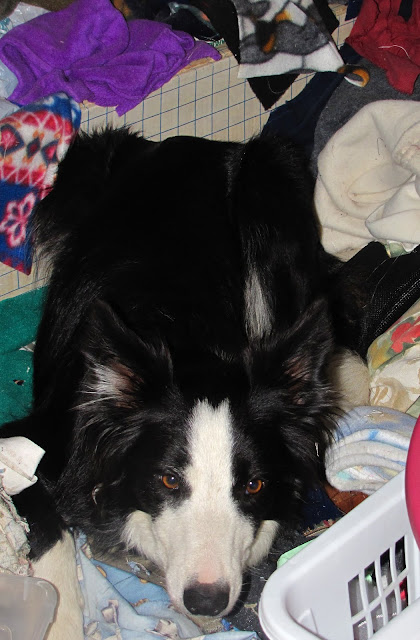 Jake, who I think of as being wimpy, wasn't bothered at all, and just laid snoozing on the driveway.
That $2 dutch hoe I bought at a garage sale turned out to be the ideal tool for prising off the flashing. 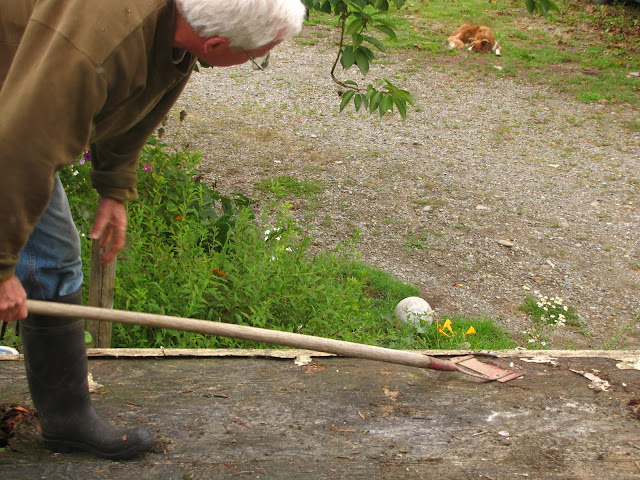 Then the rotten plywood started to come off. 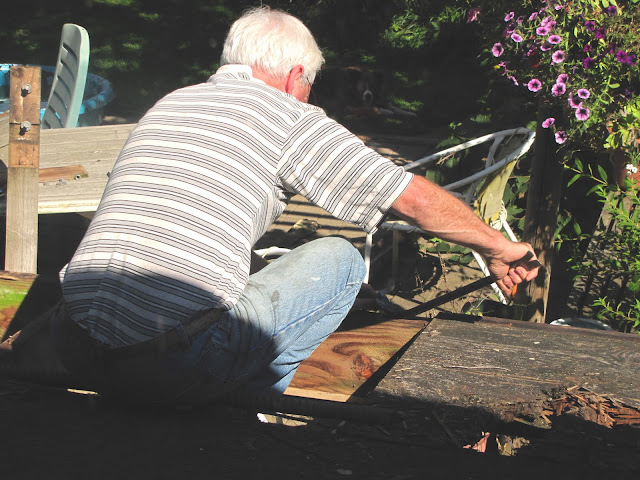 Yesterday Larry bought new plywood and some other lumber.
He beefed up the supports at one end of the deck. 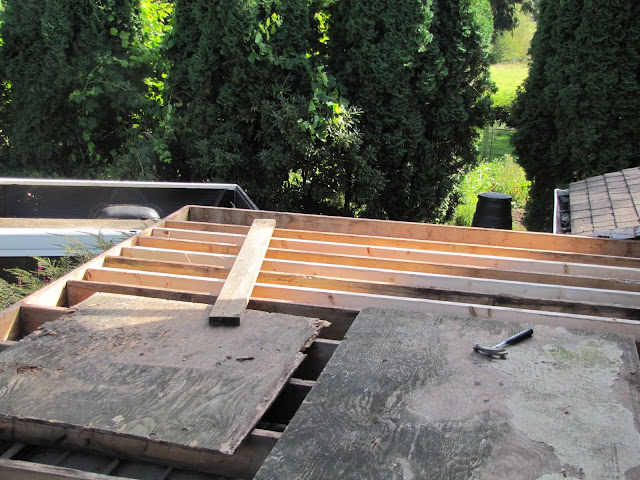 Ya know, in case one day we decide to stick this little beauty at that end:)
Better to be prepared!

And tonight, the new plywood is stacked up there, and everything is covered with a tarp, because our forecast is rain in some form or another into next week.
Posted by Karen at 11:10 PM