On the Edge of Dark

These two photos are the view from the 16th floor opthalmologist's office in Vancouver that we have visited twice in this week.  It's a pity that a lot of people sitting in that waiting room probably can't see it very well;-) Suzanne, that's English Bay off to the left behind the bridge.  Your cruise ship will sail through there on it's way to Alaska. 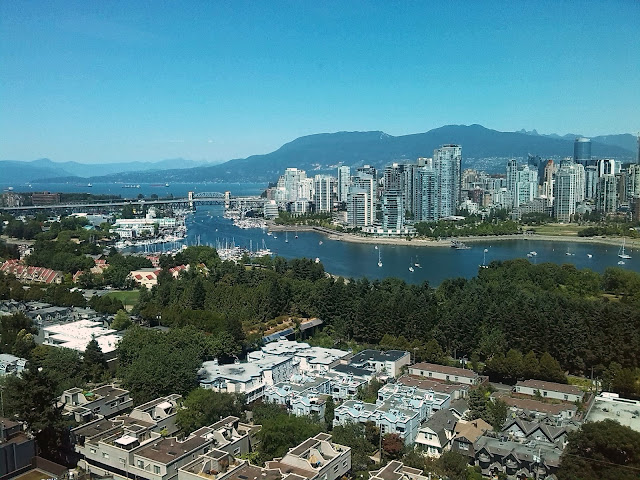 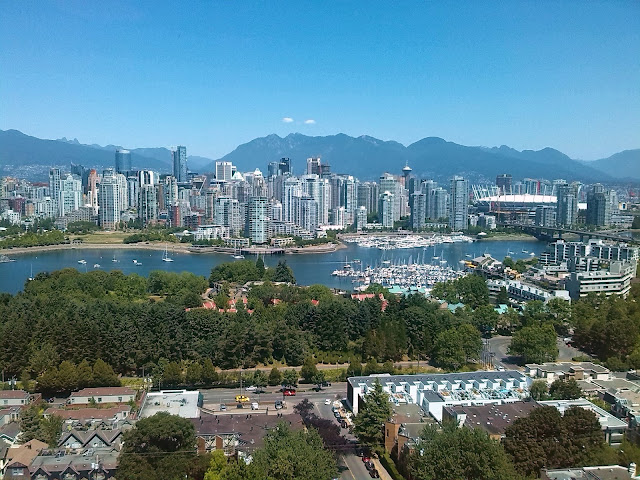 It's nearly an hour trip by the time you've found parking.  On Tuesday morning we had to be in Vancouver at the hospital at 8am.  Larry underwent an endothelial cell transplant in his right eye, the worst one, to replace the faulty cells on the back of his cornea that are no longer removing the water from the eye.  It's like he's looking through a watery fog.
The surgery had originally been scheduled for the end of May, but was cancelled due to lack of donor tissue.  Last year he had cataract surgery in both eyes, and this aggravated the condition known as Fuch's dystrophy, which is a heritable disease.  His mother had it, and another brother, maybe two, have it also in varying degrees.
He was at the hospital for four hours, so I managed to kill that time.  I left the car where we had parked it, and did a lot of walking.  Driving and finding parking in the big city for a country bumpkin like me is a bit stressful, so I thought I'd rather walk, and I needed the exercise anyway.  By the time I got back to the hospital I was done in, and I still hadn't got the phone call to say Larry was finished.  It was another of those endless sunny hot days that seem to be going on forever.  He was supposed to be at the hospital 2.5 - 3 hrs.  It was 4 hrs by the time he was done.  He was heavily sedated, but not asleep though the surgery.  Then we had to immediately go to the opthalmologist's office, the doctor was back there already, and check that the flap of cells was still in place.  Larry was to go home and lay on his back as much as he could for the next 24 hrs.   Traffic wasn't so great on the drive back, we were in the little car which has no airconditioning, and by the time we got home I was really done in.  We can drive back from the Okanagan in 35 C + temperatures, and it is okay.  That is because we are moving at 100km an hour and there is good air flow through the car.  Stop and go traffic with the lack of air flow is totally different.
Yesterday we had to head back in to have another check up on the eye.  I decided I was going to drive the truck, even though it is bigger and less fuel efficient, but at least it has that most important air conditioning!
The doctor was very happy with Larry's eye, he said it looked 'perfect'.  He was to go back home, and basically do nothing. No bending, no lifting, no going for walks (which he had done that morning, oops) no physical exertion of any sort. Basically to stay as quiet as possible until the next appointment on July 13th.  The doctor told us the story of a fellow that went for a 2 or 3km walk each day, and the cell flap fell out of position.  He said each step is like a little pile driver to the eye.
So this is going to be really frustrating for Larry, who feels fine basically, and frustrating for me too, as I will have to pick up the slack. But, we are counting on it being so totally worth it in the end.
I came up with a great idea.  I have decided that he can take over all the meal prep!  Sounds wonderful to me, not so wonderful to him I'm sure.  Last night he sat and cleaned and bagged up some of the 96 lbs of blueberries I brought home earlier.  I carry the boxes and bags.

The dogs expect a walk in the evening.  But Tuesday after that long day in Vancouver, I was toast.  I took the two collies out into the field as it was on the edge of dark (thanks Henny, love that expression!) and played a short game of fetch, under the light of the almost full moon.

Sorry for the lack of  quality of the video, but it was darker out there than it appears. 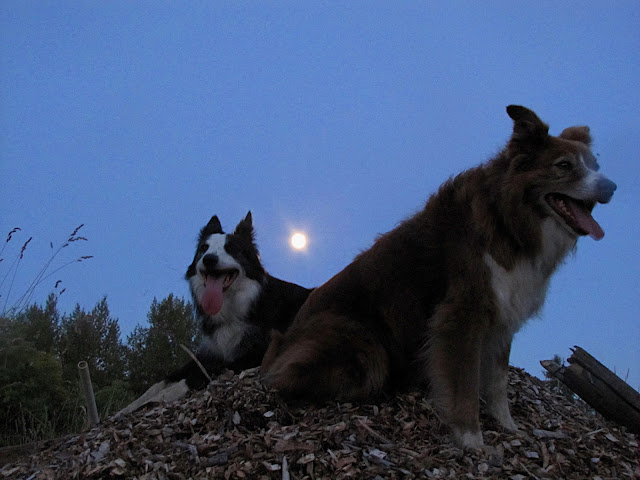