One thing that we missed when we changed our eating habits, was porridge.  We used to have oat bran  porridge most mornings.  Since we are no longer eating grains of any kind, it was hard to come up with something to replace it.  I bought a packaged porridge from the clearance table at the produce store we frequent.  It was just disgusting, no wonder it was on the clearance table.  We tried a couple of different recipes, and I played around with a pumpkin one and came up with something that we really like, and we have it now about every other day. 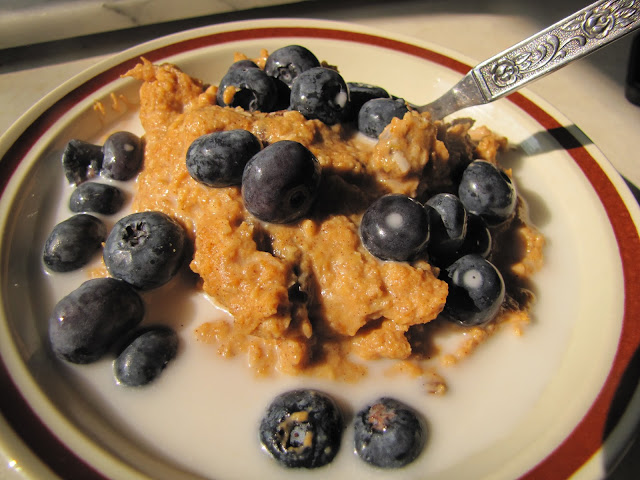 Put it all in pot on the stove, mix together and heat to a simmer, stirring constantly.
Take off the heat, pour some coconut milk on, and add a bit of fresh fruit if you like.

Note - We don't use peanut butter,  peanuts are not a nut, they are a legume, and we are not eating legumes
Coconut milk comes in lots of different varieties. We have found one that we really like for this use, it is Real Thai brand, and comes in a tetra pack.  It is just coconut extract and water, no Polysorbate 80 or sulphites.

So while I was eating this for breakfast, I was making up a list for today.

I was puttering in the garden while Larry was making the porridge.  After breakfast I headed off with the dogs through the bush.  I don't think I've mentioned that a large cougar was spotted about a mile and a half from here about three weeks ago.  That thought is in the back of my head as I walk down the trail in our bush with the dogs each morning.  So I'll introduce you to my Kougar Konker.  It's that piece of fence post leaning up against the gate leading to the bush.  I figure it would be nice to have some sort of weapon handy in case the cougar attacks one of the dogs, or me.  Really though, I'm hoping it was just passing through, but then....over the years we've been here there is a sighting every once in a while.  So better to be a bit prepared I guess. 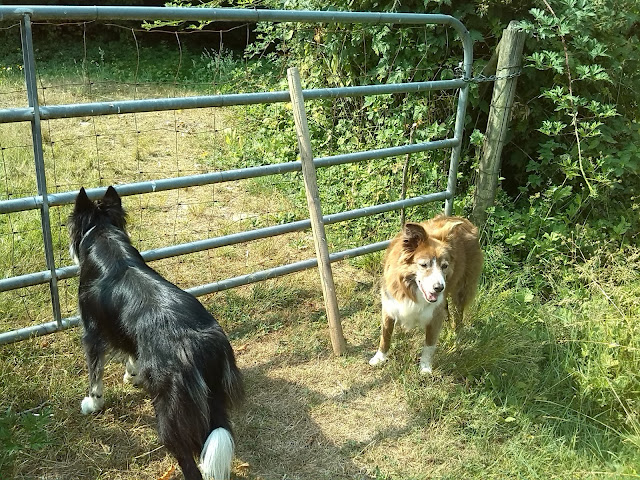 If the dogs are really agitated at this gate, as there is some very fresh scent of something floating around, we don't go through.  Coyotes have easy access to this part, and they like to let you know they are around by pooping right in the middle of the trail.  Looks like they have been eating a lot of fruit with cherry type pits in it lately.
This morning it was all fine, although I did worry once when we came to a crossroads in the trail and Jake looked out to the field and his head and ears were up. He was picking up on something out there.

Stopped at the north garden on the way back and picked three more zucchini.

I did manage to fix the water line at the green house.  I think only one swear word was uttered  and I was only bleeding from one spot.  My patch job wasn't working, the hose clamps weren't cooperating and we didn't have any new ones left, so I did the smart thing and removed the whole 10' piece of line and put a new piece in and it is all good.

The water repair at the control box looks like a doozy.  It involves working in a confined space, and I will have to turn the water off to the whole house with an old tap that I don't even want to touch because it looks like it might fall apart if I do.  Pulling pipes and connectors apart to replace a t-connection.  Maybe tomorrow.

Got the clothesline fixed, and made sure that it won't pull apart like it did.
Figured that might happen when I was replacing it a few months ago, and it did.  Should have fixed it right then.

The truck is unloaded from Sunday's market.  Mostly empty coolers and veggie bins and mushroom boxes.
It's now mid afternoon, cooler today than yesterday, and much of the smoke has cleared.

Should be making some jam I guess, but I do like to leave that to the last minute;-)
Maybe tomorrow!
You know that old saying....tomorrow never comes.

PS No, I haven't found my glasses.  Still checking as I'm picking raspberries, more of that to do this evening.  Thankfully I only need them for reading, and we do have a pair of readers here that are filling in for the time being.