Breakfast was fried eggs with gently (sounds like something they would put on a menu) sauteed zucchini and a salad of chard, collards and tomatoes sprinkled with sliced almonds, with half a fig on the side. (Thanks Larry!)  Speaking of Larry, he had another checkup on his eye, things are coming along just fine the doctor says.  He is back to doing most, but not quite all,  of what he would normally do.

The same salad for lunch with pickled beets and a can of tuna mixed with homemade mayonnaise, chives and grated carrot.  Raw chard and collards fill in pretty well for lettuce when the lettuce is all bolting and tasting bitter.

Supper was left over pork chops with roasted vegetables, which is where the potatoes, carrots, cauliflower and broccoli come in, as well as the first of our beans. 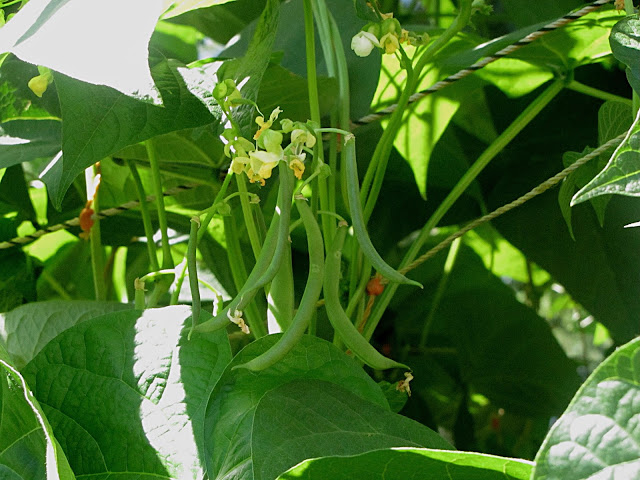 I got in a good couple of hours of weeding and seeding in the garden today, until it got too hot. While I was out there I ate a few of the last raspberries and blueberries, and maybe another fig or two.  I FINALLY got something planted in the spot where I dug the garlic out three weeks ago.  Just another one of those jobs that aren't hard, it's just the getting started that is.  Now I need to get the garlic sorted out and cleaned up and ready to take to the market.

We walked the dogs around the block a little bit earlier tonight, and saw two bucks disappear into the trees along the way.  I was hoping for a picture, but no such luck.

After the walk and just before dark I managed to managed to get a bucket of blackberries picked, the last part probably more by feel than anything.  Of course quite a few of those didn't make it into the bucket.

I forgot to pick the zucchini yesterday, so of course today the eight that I picked were bigger than I would have preferred.  The zucchini plants are starting to take over some of the potato plants, so I dug up those so they wouldn't get so overgrown that I'd forget about them. 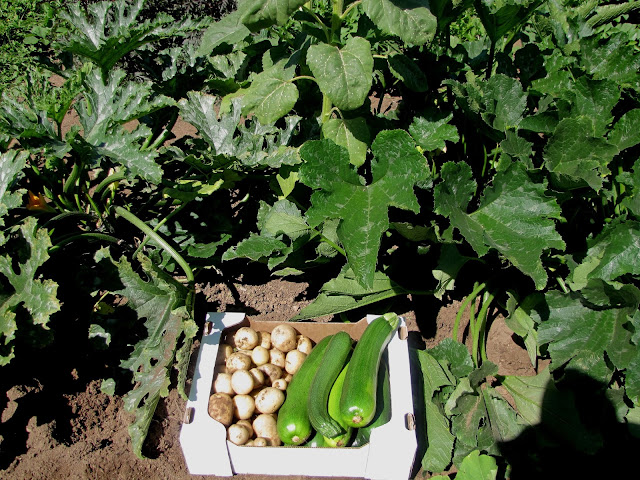 I was about to start some jam this afternoon, but then didn't because I had to leave to meet someone earlier than I had planned, and while I was out bought a few other fruits and veggies.  Larry had reminded me to get a box of cheap apples for the sheep.  She gets one morning and night, and is sure to let you know that she hasn't got it yet, and what. is. taking. so. long.?  Well there were none of the cheap apples to be had, but I had an idea.  On the way home I took a different route past a couple of apple trees that are along side the road.  Luckily they were ripe and there were lots on the ground.  I managed to scrounge up 10 or 15 pounds of ones that weren't half rotten and put them on the floorboards of the car.  All the while trying to look very nonchalant and was really hoping that people using the post office, library and credit union across the way didn't notice me poking around in the long grass at the side of the road.