Sometimes I'm all set to do a blog post, and then I seem to have too much to say, and it seems like just too big of a deal to actually get the post done.  So I took a few pictures this evening, thinking this could just be a simple and quick post.

We have been enjoying Summer for two months.  Now it is getting a little old.  Hate to complain about the sunshine, but we desperately need rain.  This is just not what we are used to.  The grass is turning brown, it looks more like mid August than the end of June.  Some of the vegetables are protesting and are going to seed sooner than usual.  I'm having to water a lot.  The arugula is one of those 'going to seed' vegetables.  There are still leaves there, and I was cutting the stems and picking the little leaves off, but that makes for a pretty labour intensive $1 bag of arugula.  Time for it to go, and make room for the tomato plants that have been languishing in too small pots for too long. 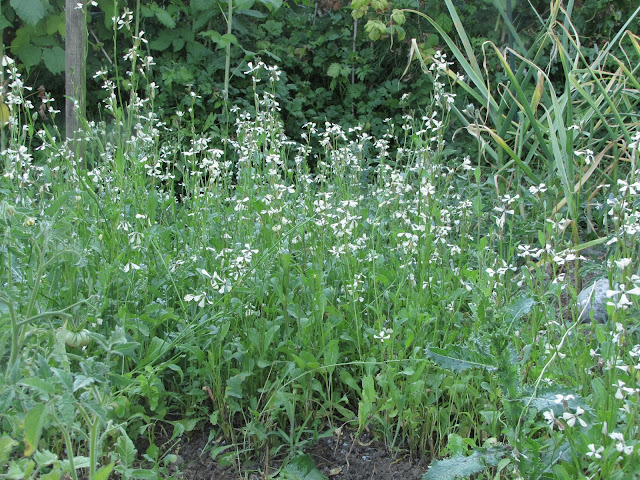 It's handy having one of the chicken fields right next to the garden.  A lot of the weeds and old veggies just go over the fence to the hens, and they are happy to get them.
Today was arugula day. 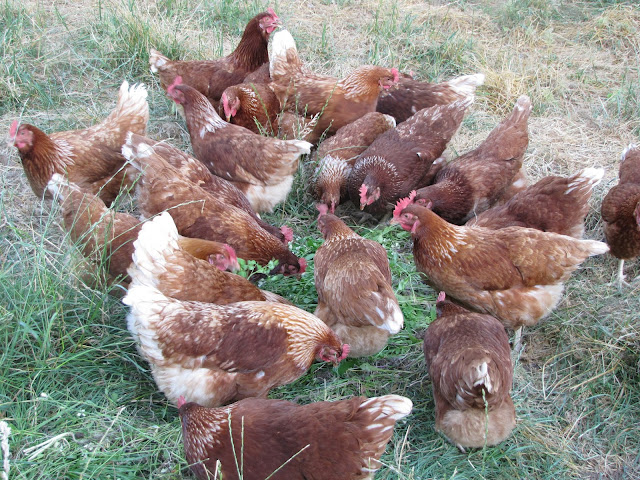 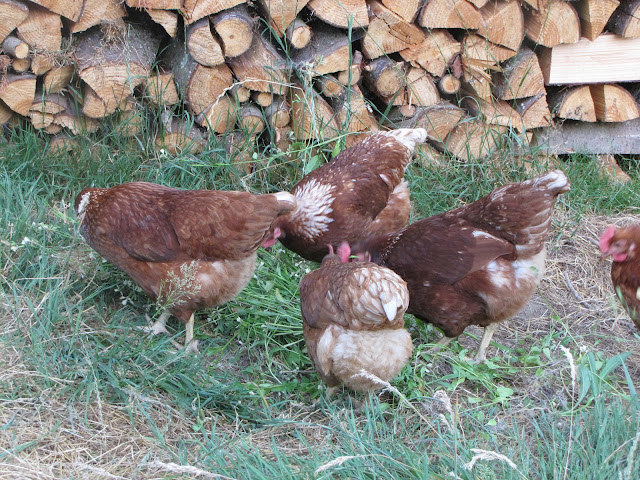 And this is what hens do in the heat.  Kind of like me, holding my arms out a bit to keep air flowing in the 'pits' 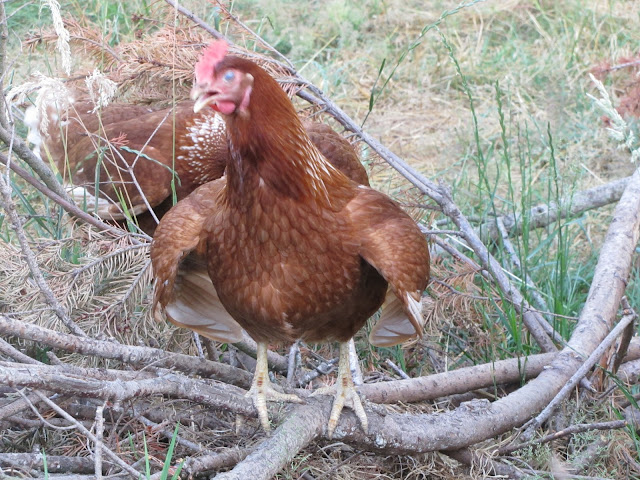 Now I would have ended this post here. short and sweet.  But....while I was pulling out the last of the arugula, there is some cackling coming from the other chicken field.  Kind of the 'I've laid an egg' type cackling, not the 'help, the coyote is after me' kind of squawking, but still, since Luna was barking at the fence I thought I'd better go and have a look.  So I let Jake and Luna into the field, and Luna right away gets distracted by the sheep.  Jake is out there wandering around, and then I notice he is down along the fence by the road, and his tail is up high.  I go down to look and find a hole dug under the fence, and feathers near by. So I go and get Larry and we fill in the hole with a huge rock and check for other spots and put down more big rocks and blocks and big chunks of rotting lumber and whatever we could find.  The ground is so dry and light and easy to dig in.  Jake found a partial chicken carcass and munched on that.   Now that one was not fresh, and I'm guess that was a hawk kill, as a coyote would have taken the hen with it.   There was a hawk hanging around for a long time on Saturday afternoon, and who knows what might have been going on there for the 3 1/2 days we were away last week.  Only saw the hawk once or twice, most of the time it was in the trees, the crows were giving it hell and the robins were shrieking 'hawk, hawk'!  The hens were all in hiding, and then on Sunday morning they didn't even want to come out of the coop.  Anyway, hopefully we have deterred the coyotes for a bit, and the hawk didn't seem to be around today.  I did a head count tonight on the hens, and we may be down 2 or 3, which was better than what I was imagining, considering that egg production has dropped off in that coop, but that is probably more a factor of their age and the heat.
Never a dull moment.
Posted by Karen at 11:07 PM