One of Those Weeks.

Just couldn't seem to concentrate on much this week.  Each new week, after the market's over, I'm all full of great plans of what I'm going to accomplish.  That never amounts to anything like what I imagine I can do, but this week seemed particularly pitiful.  It really was a struggle to make jam. At one point I said that I didn't want to make jam any more.

Monday was mostly taken up with the trip to Vancouver for a check up on Larry's eye.  So far so good.

I finally got at some jam on Wednesday afternoon.  It was just so hard to get started.  I think it was about 5pm before I really got going at it.  Three batches done that day.  Thursday late afternoon I finally got going again, and made some Strawberry Rhubarb, Bumbleberry and Ginger Pear.  Today was another late afternoon start, with Mango Chutney and Seville Marmalade finally done.  There is so much weeding, and planting too, that needs to be done in the garden.  I'm out there a lot, but seem to accomplish nothing that shows.  I wander around looking at stuff, and stop to yank out clumps of weeds, but never get one job completely done.

The weather has cooled off a bit, and we got a few brief showers of rain that did nothing more than dampen the dust for a little while.   They did nothing towards watering anything.  Look at our front lawn.  I have never seen it so brown. 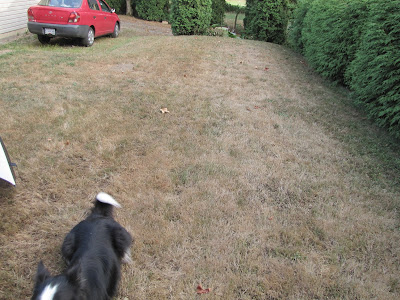 We sauntered around the block tonight with the dogs, we all went together, so you go at the pace of the slowest dog, which would be Calli.  The last couple of weeks I have been going one way with the two collies, at a fast pace, and Larry saunters the other way with Calli, and we meet about 3/4 of the way around.

Tonight the sky was colourful when we started, but by the time we were done it was pretty darn spectacular. 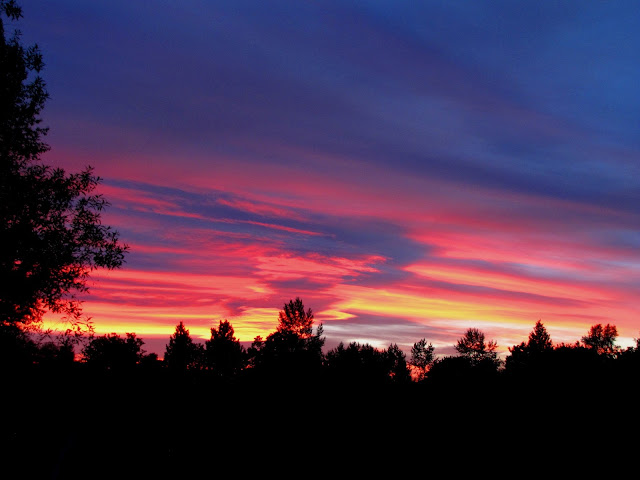 I headed up to the north garden to do a zucchini check.  I do that twice a day in attempt to pick them at roughly all the same size.  The grow fast, and the zuke you see in the morning that isn't quite big enough, will be too big if you leave it a full day before you check again.  There were only a couple ready this evening, although I may have missed one or two, as it was on the edge of dark, but there were a couple more that will be ready in the morning. 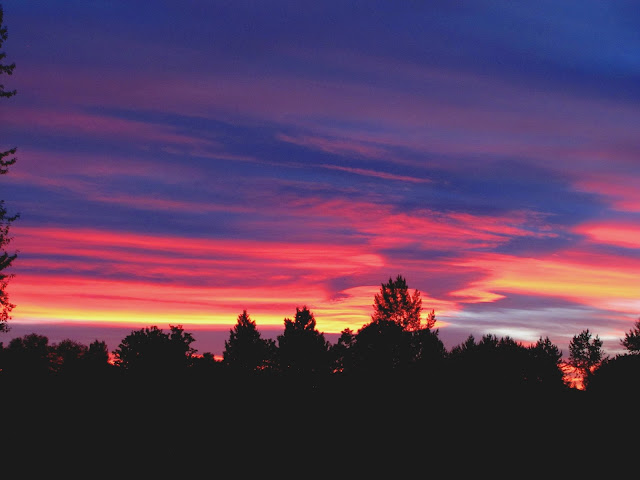 I had my phone with me, but it wasn't doing justice to the colours in the sky, so I ran back to the house and then back out with the camera.  No time to dawdle, the sky was changing quickly. 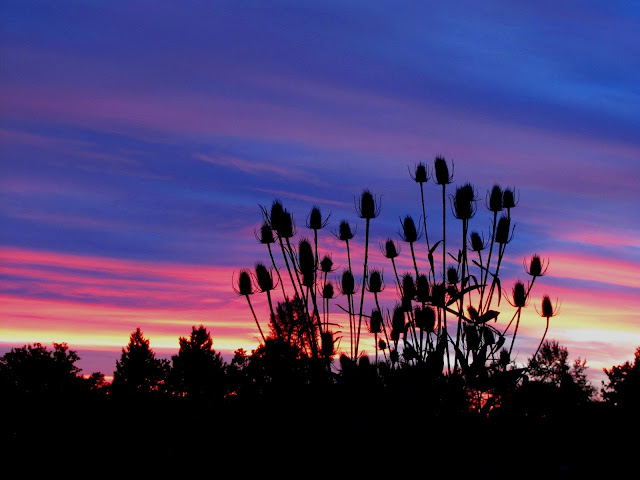 Yesterday morning I asked Larry if he was ready to walk through the bush.  I felt like it was time to reclaim our territory.  He said he wasn't ready yet.  I didn't want to push it.  This morning he said to me that he had thought about it, and was ready to give it a try.  We had the Kougar Konker, the dogs all on leash, we stuck close together and I got Jake to do lots of barking as we went through the trails.  I was reminded how close the undergrowth crowds the trails, even though some of it is dying off from lack of water.  Luna kept her nose to the ground most of the time.  Calli stopped to do a lot of sniffing, and I kept telling Jake to speak! speak! speak!
When we got to where the deer carcass was, well it was almost as if it had been a figment of my imagination.  There was nothing at all left where the body had been, I couldn't even tell exactly where it had been laid.  There were a couple of dried up black bits of something, some bit of organ that I had seen 10' away from the deer, last week, but that was it.  Really surprising.  If the coyotes had been in there, I expected to see more of the ground disturbed.  They've been singing most evenings,  although we didn't hear them tonight. 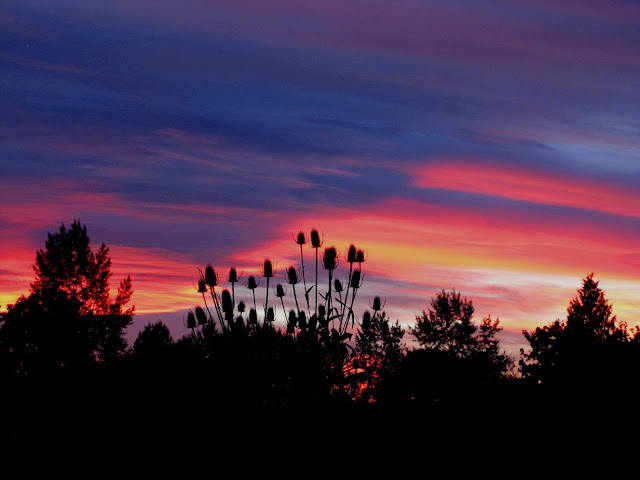 I'm not sure that I'm quite ready to go back to our regular morning walks through there yet, but we are often close to that area as we work on picking our forty buckets of blackberries.  Five down, thirty five to go.