We went camping on Wednesday.  Yep, we were away from home for a whole 22 hours!  We've been wanting to get out in our little fifth wheel trailer, but between work and my mum, there just hasn't been the opportunity.  Since there is a nice campsite just 20-25 minutes away, we figured if we got a decent day this week, we'd just head out, even for one night.  So I made jam all morning, and helped Larry get the canopy off the truck, the fifth wheel hitch in, and the trailer hooked up.  He got some food together for a few meals and we put in a few other odds and ends we needed, including the dogs and all their stuff, and we were off.

We went down to Derby Reach Regional Park and the campsite at Edgewater Bar.  We figured that since the kids are all back in school, we shouldn't have any trouble getting a spot.  I was worried about fishermen though, so Larry took a run down there in the car in the morning to check it out, and there were lots of empty campsites.  We got there about 3, and got set up in our site right along the Fraser River 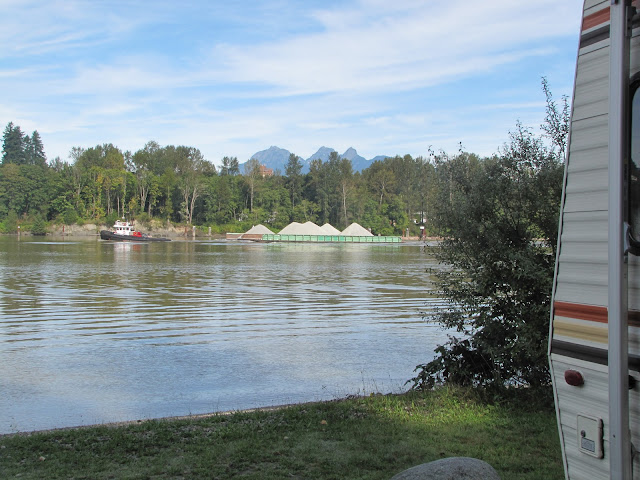 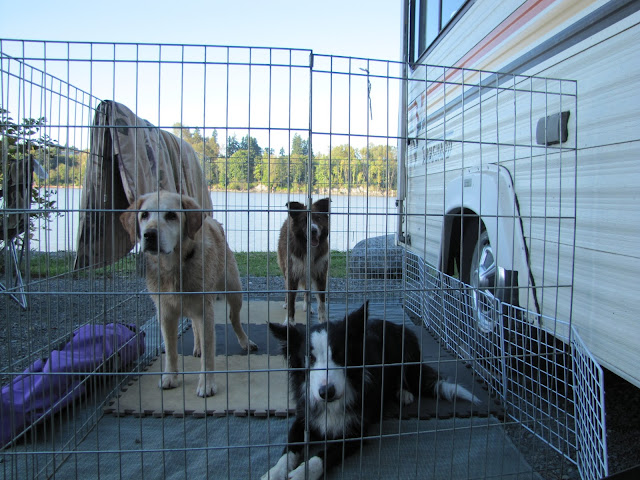 The park has a great off leash area, with access to the river, so we took a walk over there.  Our dogs aren't dogpark dogs, as in they have no interest in socializing with the other dogs.  They just want to play ball.  Which is great really, especially with Luna.  Since she is not particularly good at meeting other dogs face to face, if she is focused on a ball, it gives her something else to think about.  Other dogs might come up, but since she is basically ignoring them, they don't get right in her face, and all is well.  She had a goofy young lab bounding along behind her as she chased the ball, but she didn't care.  Only once she told him off when he got in her way.
This photo was taken the next morning, when we had this part of the doggy park to ourselves. 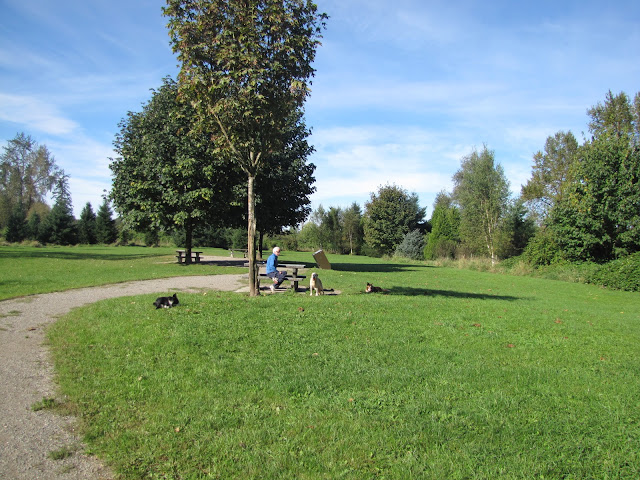 So of course the dogs were hot after all that running around.  Down at the far end and round the corner to the right you get to the river.  We went that way and our three charged to the water, and Luna laid down in it.
Here's part of the river access.  It depends on the water level as to what sort of 'beach' area there is.
We went down to the end to get away from the other dogs.
We're just unsociable snobs:) 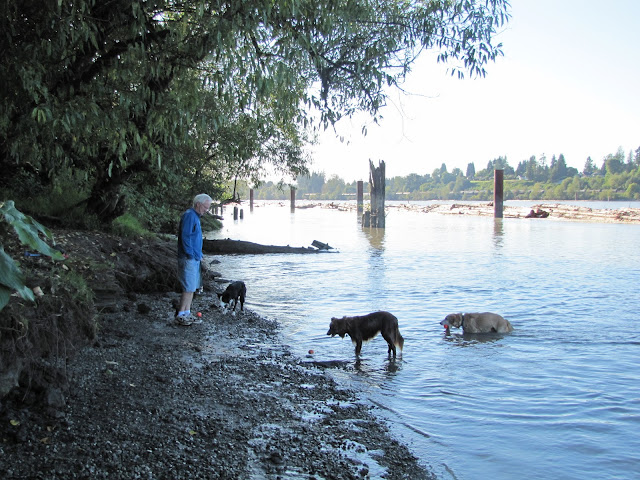 Then back to the campsite to round up some supper.
Here's the view downriver, standing on the beach below our site. 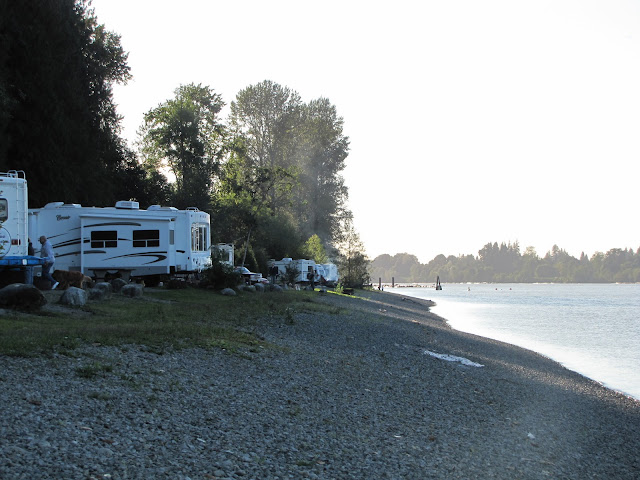 The dogs dined on stewing hen, at their waterside table. 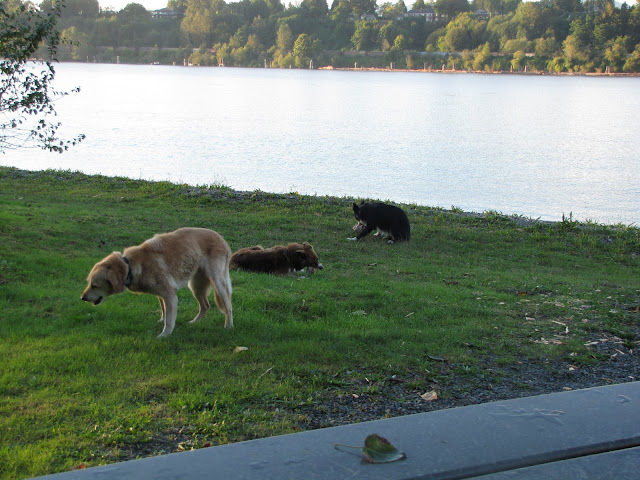 It's not the quietest place.  There are busy train tracks on the other side of the river.
We had simple camping food.  Fried onions and tomatoes, and a can of baked beans. 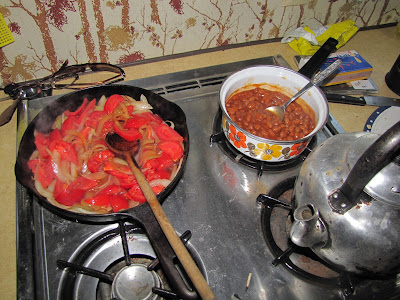 There were quite a few fisherman along the river, and below our site a spawned out, ugly looking salmon swam back and forth.  Not long to live I guess. 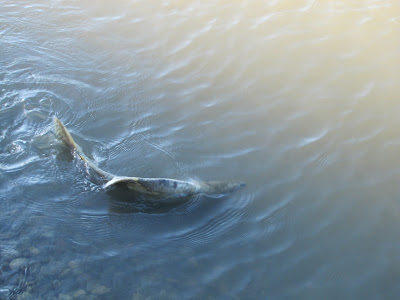 The sun sets over the river. 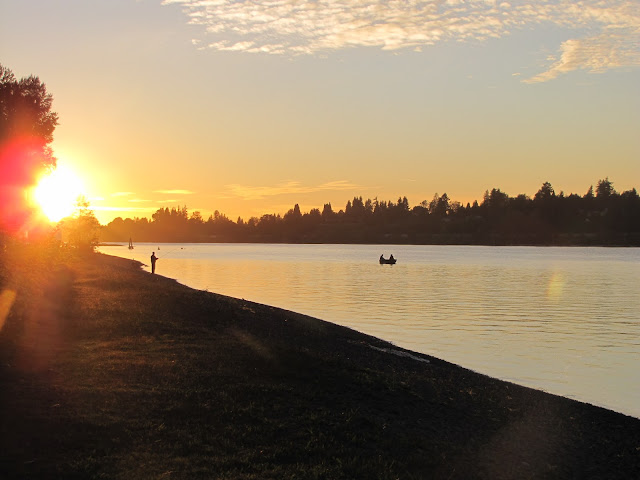 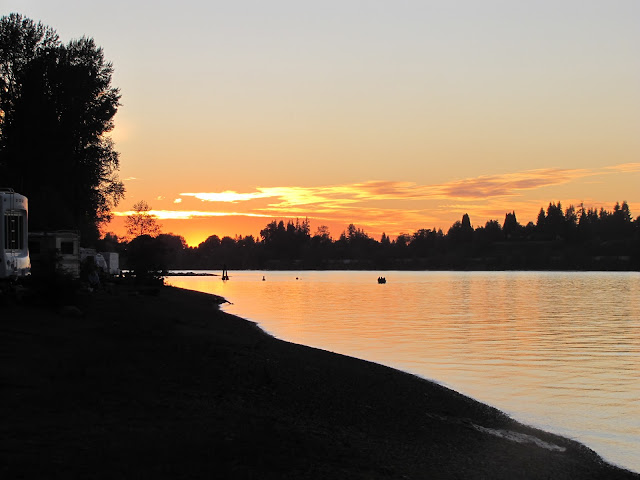 The mist burns off the river the next morning.  The only negative thing about these campsites is that at this time of the year, with the sun getting that bit lower each day, they stay mostly in the shade as the trees on the other side of the road are so tall.  The dew is so heavy overnight that things never really dry off.
Lots of places to find the sun though. 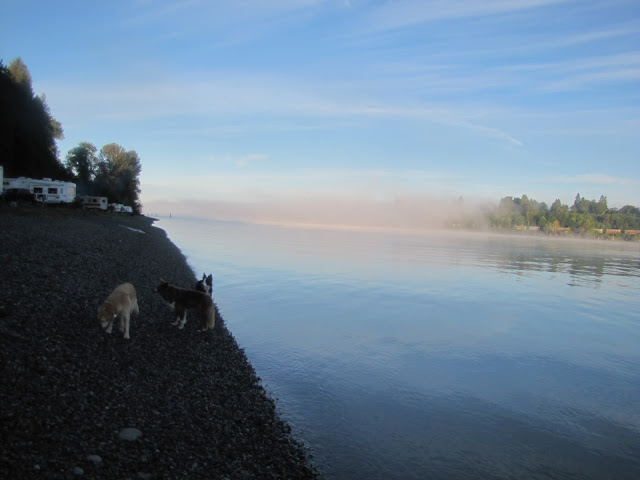 After a short walk down a trail, where a coyote dashed across in front of us, which turned Luna into a lunging shrieking idiot at the end of the leash, we went back for some breakfast, and then we headed off again.  The dogs insisted that we make a stop at the dog park, so more ball action.  We skipped on the river this time.  Then we headed off on the trail that leads from the dog park.  We rode through this area on our bikes earlier in the year.  There have been a few changes though.  There are cows in one of the fields. 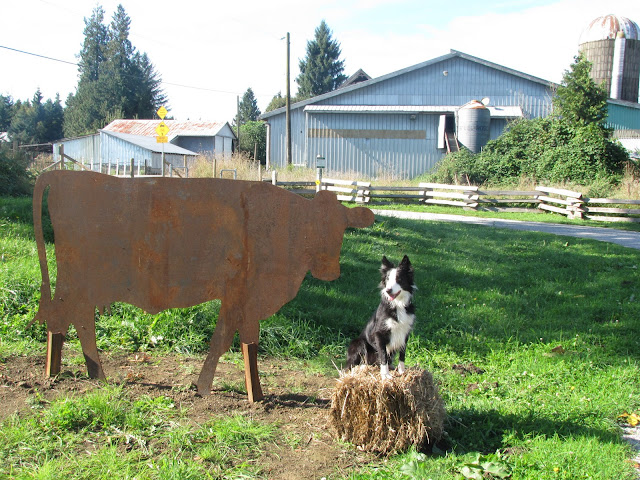 Get along little dogies!
Notice who's doing the grazing here. 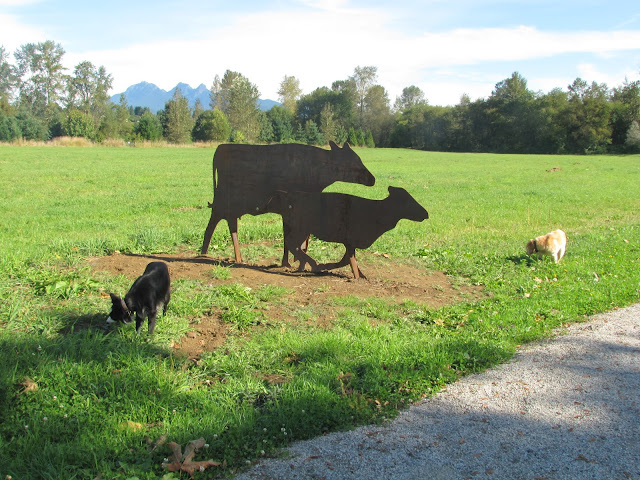 We weren't sure how far we should walk, because we have to take into account that Calli can only go so far.  She seemed to be doing well, so we kept on going.  Down the road between the barns and the farmhouses, and eventually the trail led into another field, where a fellow was plowing by horse power.
(This as well as the cows were cut out of 3/8" steel)
That's Golden Ears in the background.  No snow on them yet. 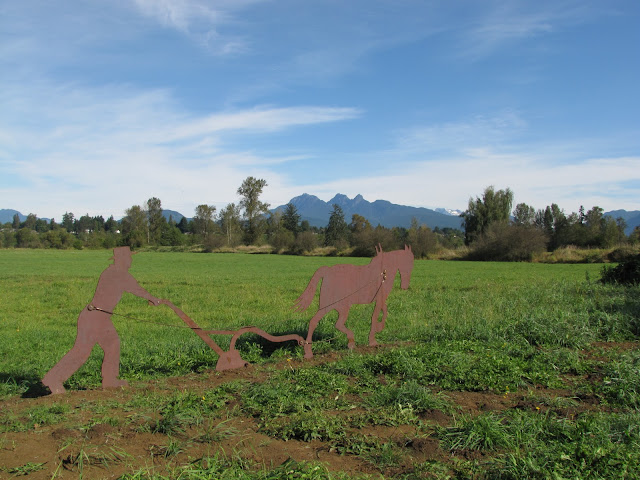 It was a long walk across the field, but we made it to a new picnic area by the river.  Not a soul in sight.  Dogs are supposed to be on leash of course, but since we had the place to ourselves they got some river time.  Eventually a woman with two dogs showed up, and her's got some river time too.  She said she comes every day and usually never sees anyone else there. 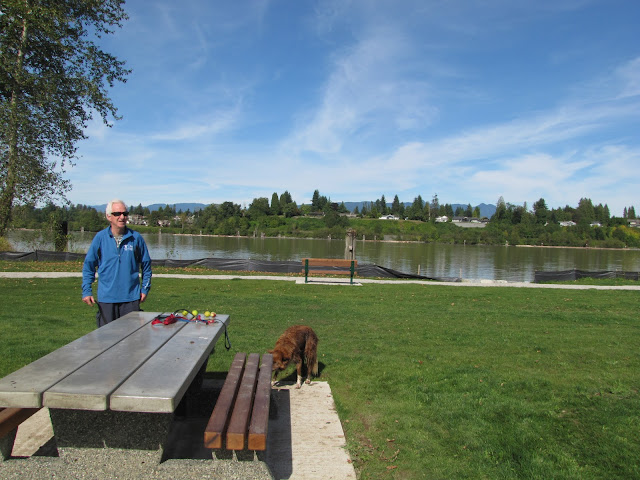 She said sometimes there is a big sandbar here. 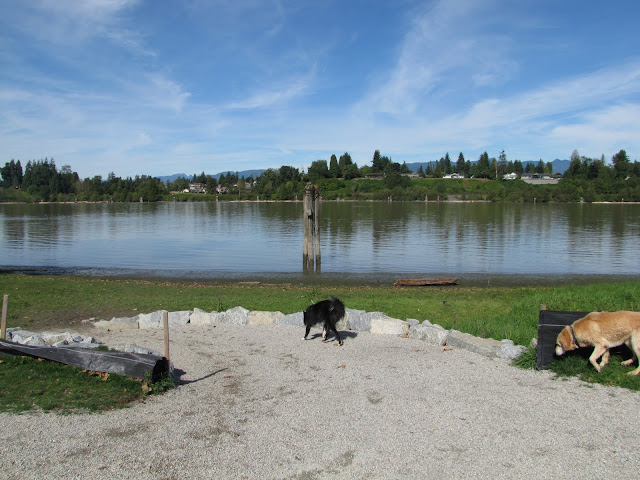 Calli did well, although she had scraped the top of one toe raw on the gravel path. (She drags her back feet a bit).  On the way back we forced her to walk on the grass along the edge, and as we walked the last bit to our campsite, her back end started to give out.  I grabbed her tail to help hold her up, and we slowly walked the last little bit.
And then we got ourselves packed up and headed back home, where duty called.
Posted by Karen at 8:31 PM