Bad Hair Day at the Market

It was one hairy day at the farmers market yesterday.  It's located right next to and between two 15? storey condo towers.  The towers are located at the top of the hill, about a mile from the water.  They create their own weather system.  The forecast for yesterday was showers with a wind warning.  Gusts up to 80 kph. Add to that the tower's wind tunnel effect, and it was downright scary.  We got there and struggled to get our two tents set up.  The back tent was cranked down tight to our utility trailer that has all the extra jam in it.  There were 4 heavy bags filled with water hanging off the legs of the tents.  We were fastened to the tents either side of us.  The tent legs weren't going anywhere, but there was such a tremendous force on the top of the tents, that we worried that they were going to be destroyed.  There are 4 strong straps with clips that hook around the cross pieces on the inside of the cover.  They help to pull the top tight, and we only usually ever use them if it is raining, to stop and pooling of water happening.  Yesterday at least two of those clips broke on the back tent over the trailer.
Tents were blowing around, things were crashing over, some vendors packed up.  It was really ugly.
Eventually we decided to just take the fabric tops off the tent frames, as that was the fastest thing for us to do.  Thankfully it didn't rain, although it threatened to a few times.  We got a few drops coming down as we were packing up, and then there was a torrential downpour about an hour later.
We were thankful for small mercies.
We just set out the jam, and the vegetables and flowers.  No sewing.  Our booth looked a bit bare, but there was no way to keep that sewing from blowing away.  Surprisingly, sales were pretty good, so in retrospect it was worth the 5 hours of battling the wind, although at the time we really wondered.
Because of the weather forecast we had left the dogs at home.  I'm glad we did, Jake would have been terrified.
Lots of other people took their tents down too, it all depended where you are located.  Vendors at the south end of the market are more protected, so they were mostly okay.
Big hair 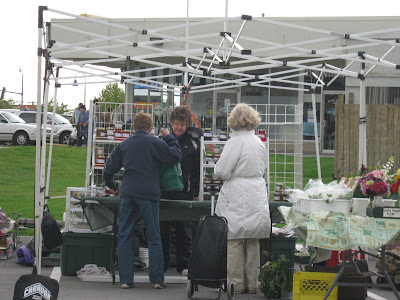 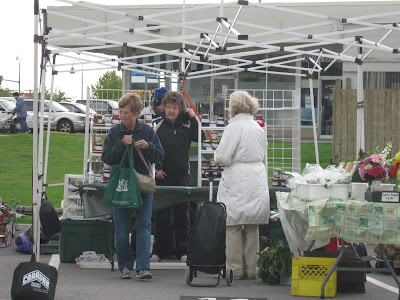 Hood going up. Larry's already wearing a toque from our stock 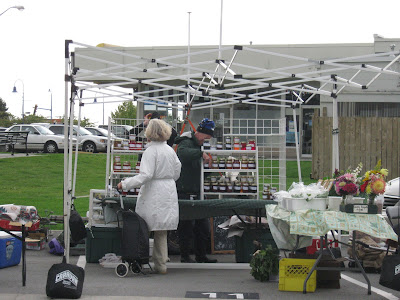 Hi Meredith!
She was taking the photos from the market's coffee tent on the other side of the roadway 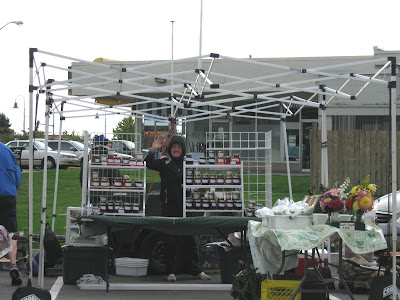 Here's some video Meredith took, which gives you a pretty good feel for the power of the wind.
Those are big, heavy moss hanging baskets that are blowing back and forth.
She pans to the south first, where there are quite a few tents still up.
Then she points to the north up 'hurricane alley', between the towers, although you can't see the high part of them. It was even worse up there, and that white tent on the right did eventually get taken down.
Posted by Karen at 1:25 PM