When we first moved here, there was no cable vision.  It did eventually get put in on our road, and there was also the option of one of those gigantic satellite dish things, which have now become the tiny ones that you fasten on the side of your house.
When we moved here there was already an aerial on a tower at the end of the house, and we had a control inside that allowed us to rotate the aerial to get the best signal.  We could get about 6 channels on a good day.  Larry, remote in hand, flicking through those 6 channels was annoying enough.  We lived with that set up for years, well for 25 years in fact, until the end of August when every thing went digital.
Then we had to make a choice.
Go to cable vision or satellite.
Update our aerial and either buy new TVs or buy a digital to analog converter box so we could use our old ones.
Not being ones to enjoy paying a monthly fee (read: cheap), we had sort of decided to update our exterior aerial, buy a new tv to replace the oldest one, and buy a converter for the other.  I had a little crt TV in my sewing room, and was interested in getting a new little one that was easy to move around.  Then I could have it in the kitchen while I was making jam, and in the garage while I was put together the bouquets.  That meant the TV was going to need it's own aerial.
So we bought a 15" tv and what is supposed to be a fairly good indoor digital aerial.  Our first step in to the digital tv world.  Baby steps you know. We followed the instructions on searching for channels with the aerial, but it wasn't a success.  The only things I could get in the kitchen were two channels of KVOS and a few others that were even more useless to me.  One KVOS channel was nothing but old shows.  This afternoon I watched two hours of old westerns.  The name of the first one escaped me.  A family on a ranch with Barbara Stanwick and also with Lee Majors and Linda Evans I think, and another one called Rawhide. Yup, anything to relieve the boredom while stirring that jam.  The other KVOS channel is music videos.  Then there is a shopping channel, actually it is on two channels, and then a channel in Spanish.  In the sewing room I couldn't get anything, and I didn't even bother trying the garage.
We even took the tv and aerial up onto the roof of the house to see if the reception was better up there. Nope.
So that indoor aerial is being returned.
Right now we have that 15" tv in the living room hooked up to the coaxial cable running to the old aerial on the roof.  We can get Global and CTV.  Woot!
We just have to sit really close.
David always said we didn't have cable
vision, we had peasant vision.
Now I think we have midget vision.
A bigger TV is probably the next step. 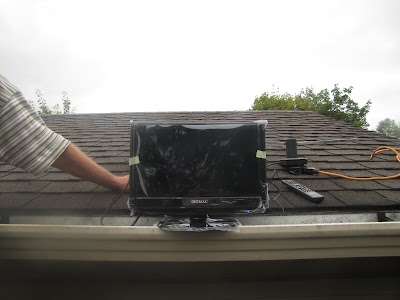