There's a joke in this area of the province...'we don't tan, we rust'.  Well we can put that to rest for a while at least.  Another beautiful day.  I cracked out the shorts for the first time this year. Went for a four miler this morning about 7am, in just shorts and t-shirt. Yep, it was a bit cool to start, but I sure was glad that was all I had on after the first half mile.  Lovely!
And then back at home I was making my usual fashion statement.  The only thing was though on the bush walk, the bare skin between boot top and mid thigh was fair game for the stinging nettles.  Sure enough, at least one of them got me.
The rubber boots rub all the hair off the back of my legs at the widest part of the calf, and then grind dirt into the pores there.  So then if I go out somewhere with that part of my skin exposed, I have to make sure that I remember to scrub the tide line off the back of my legs. 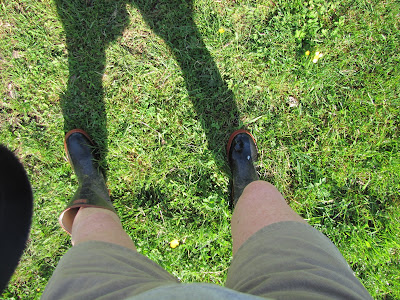 The sunshine also brings out the flies, so it was time to put Pride's fly mask on.  This is the one that I made last year, and I'm proud to say that it has held up fantastically.  Pride is notorious for putting holes in the part over his eyes.  I think he must rub his head on trees. No holes in this one yet. 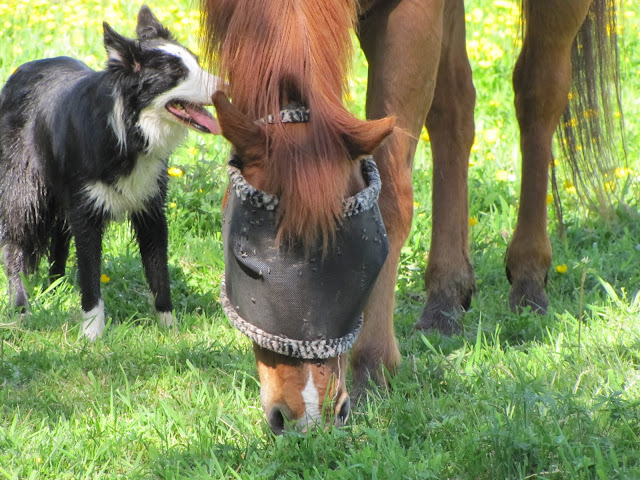 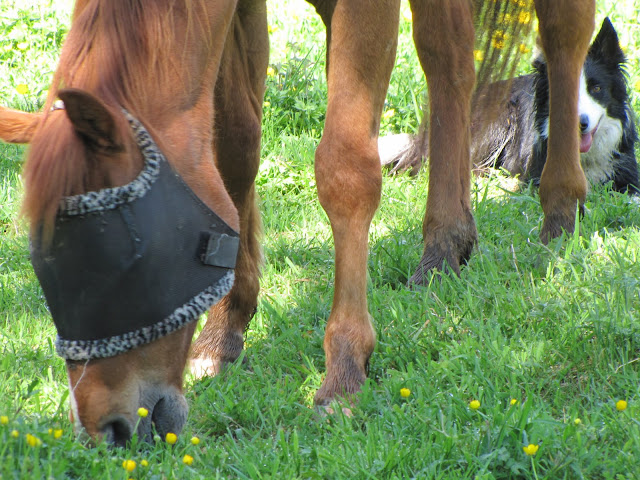 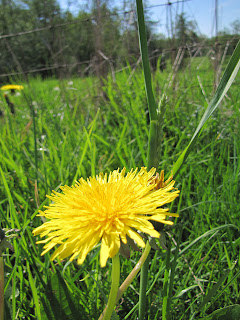 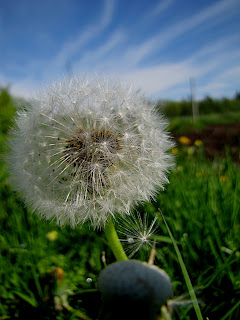 And the sun is turning the dandelions from
this
<-----

I got sick of waiting for the ground to dry out, so planted some dahlias on top of the ground and hilled over them 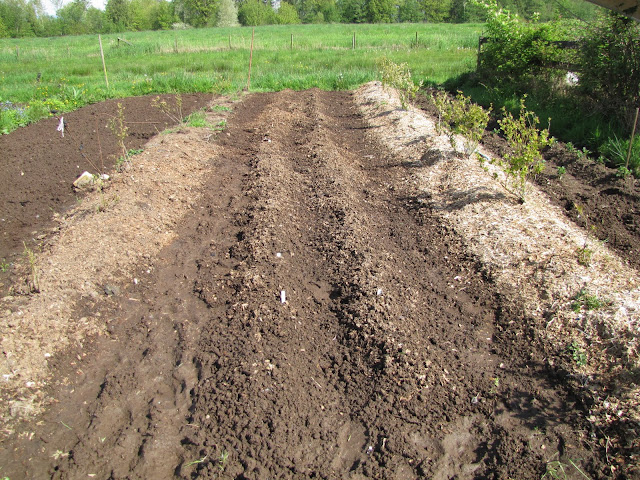 Like I had done with some potatoes on the other side of the blueberry bushes.
There's my little drainage channel. 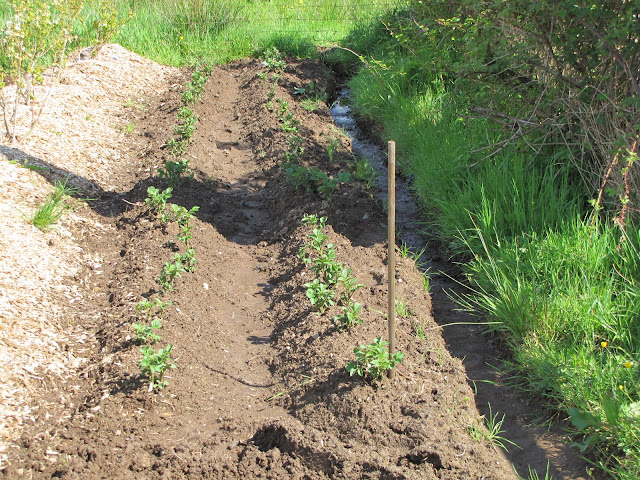 This afternoon we headed back to White Rock.  Larry went to visit his mother in the care home on one side of the street, and I went to visit mine in the hospital on the other side.  While I was there, my mum was moved from emergency up to a room on the rehabilitation floor.  There a team of therapists and other experts will give her the help she needs to make the best possible recovery.  There is no obvious improvement in her left arm yet.
Thank you everyone for your kind thoughts and best wishes for my mum.
It's only day two, and I'm finding it tough already.  I don't handle this stuff well, and I thought today would be a shorter visit.  Then I decided to stay to help settle her in her new room, and then stay to help her eat supper.  By that point, three hours later,  I was decidedly twitchy, and desperate to be anywhere else:(
It is a bit of a rocky relationship, my mother's and mine.  It would be nice to have someone to share the visiting with.
This evening we were walking the dogs around the small block.  At one point we looked behind us and there was the dog that injured Calli 5 years ago next month.  Yes, the date is stuck in my head. I was furious, and stormed back that way yelling at her to get home.  She turned into the driveway where she used to hang out (not where she lives).  She is supposed to be contained on her own property as ordered by animal control after the attack.  I'll be calling them in the morning, as this is the third time in as many weeks that Larry or I have seen her running loose.
There's no point in calling the owner.  I did that five years ago, and somehow, in his eyes, it was all my fault.
Gee, it wasn't his dog that ended up with big medical bills and a permanent disability.
PS... But now that's got me thinking....we have three dogs, and we are only 'allowed' to have two.  Apparently we would need a kennel licence to have more than that. Ridiculous.  So that would mean you could have a subdivision, say each house is on a tenth of an acre, in the space of 10 acres, there could be 200 'legal' dogs. We live on 10 acres, and we are only 'allowed' to have two dogs (without getting a kennel licence).  Now I'm not sure if that is ever enforced.  Maybe it's complaint driven.  So if I complain about the dog that attacked Calli....well the owner would pretty well know who the complainer was.... and would he complain that we have over the legal limit of dogs?  Not quite sure how to handle this now.....
Posted by Karen at 10:09 PM