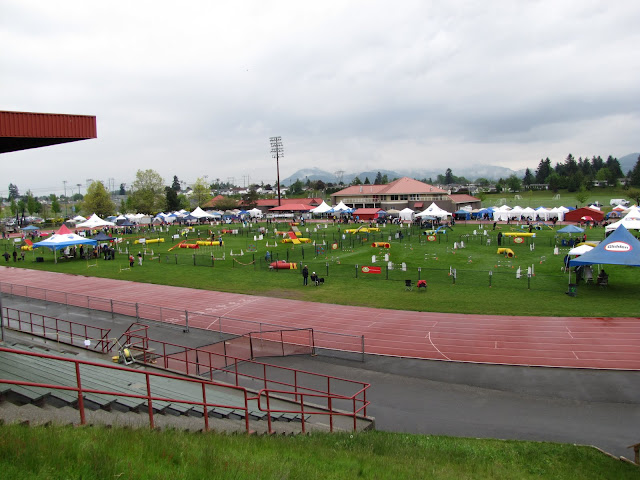 Funny, I went into last weekend with no real thoughts about how I wanted to do with Jake and Luna, other than us not making fools of ourselves.  At the end of Saturday,  I knew Jake was in a decent position, after having three clean runs, but didn't bother to check what his score was at the end of the day.  I did happen to walk past the table displaying the aggregate results on Sunday morning, so thought I'd take a look.

Holy Cow, he was in first place in his group!
Here's Jake's Jumpers run on Saturday.  He had one little spin when he thought I was going a different direction.
Dogs are broken down into groups according to their height.  You do have the option of dropping a dog down a height level from what they would regularly jump. Jake measures just a hair over the cut off for the 22" jump height. That means he has to jump 26", which is 5" over  the 21" plus that he measures at the top of his shoulders.  I did compete him at that height for the first three years, and then to make it easier on his body, I dropped him from 26" Regular to what is called 22" Specials.  (Just in case anyone is wondering what the 'Specials' meant on his trophy).
After he got a clean round in Sunday's Standard run, I started to think about the possibilities of finishing near the top.  While he was running his Standard round, it was pouring rain.  I was a little worried about him slipping on the wet grass, so ran him cautiously, and probably called out 'easy' as many times as I called an obstacle name.  Not that it made a lot of difference to his time, but I just wanted to remind him to think about what he was doing and not to go hell bent for leather.  His safety was more important than a brilliant round.
It wasn't really raining when his Jumpers round came up, but the grass was still very wet.  Another clean round!  By this time word seemed to have got out to people that I knew that Jake was in contention for the top placing in his group.  They were coming up and telling me.  Jeff (Pippin's owner) was joking that I was so far ahead that I didn't even need to go in the last class.  I was starting to get a little excited:)  What I really wanted was to get the gamble in the last class, to make it 6 for 6 clean runs.  Despite getting 50 points in the opening, the gamble wasn't meant to be.  I didn't really handle that part properly at all.  (The Gamble is when you stand behind the line of tape and send your dog through a set of obstacles in the required order)  Completing the gamble would have given us an extra 35 points.  Despite that, overall Jake finished 53 points ahead of the next dog!  Of course I didn't know that at the time, but had to wait until the results were announced.
Jake's Gamblers run on Sunday.  Nice opening (he gets double points for doing some of the obstacles if I can stay behind the line).  I totally messed up after the buzzer went and we tried to the final gamble.
Anyone that read last years posts about Regionals and Nationals might recall that Jake had issues with the dogwalk.  He would start up the plank, and before he got to the top, he would jump off the side.  This went on repeatedly until I finally had to take a 'non completion' penalty and move on.  Both times it was a dogwalk made by a company in Armstrong.  This year we lucked out, and Jake's rings had a dogwalk made by the local manufacturer that supplies most of the equipment used in this area.  I've come to the conclusion that his equipment is sturdier.  I think the other manufacturer's dogwalk must get some sort of vibration going, which is Jake is sensitive to, and that is why he won't go any further on it.  (He doesn't like things that move under his feet).
Thank goodness it wasn't an issue this year!
I was also thrilled with how Luna did.  She measures a hair under 21", so runs in the 22" Regular class, which had 49 dogs!
Here's Luna's first Jumpers run.  I got a bit lost as she ran through the straight tunnel the second time.  In fact as I ran past the judge I distinctly remember saying that I didn't know where the heck I was going.  I ended up between the tunnel and the first jump of the last little circle, instead of between the first and second jump.  Then I was sort of scrambling and let Luna go on to take the jump in the corner that wasn't part of the course.
She got the first Gamblers class, and then had a clean Jumpers run on the second day.  She had one refusal
(my fault) in the Standard round in the pouring rain.  I forget that I have to make my cues a bit more obvious with Luna, and hold them longer.  She is more sensitive to body movement, and if I move away too soon can pull her away from an obstacle.
She finished 20th in her class.
The weather over the weekend was far from cooperative.  The only good thing was that we couldn't complain about it being too hot.  Quite a bit of rain both days.  Both Jake and Luna's Standard runs on Sunday were during a downpour.  By Sunday afternoon though, the sun had come out.
Larry was at the farmers market on Saturday, and then had other things to do part of Sunday, so not much got filmed.
Jake and Luna did not run in the same ring.  They ran the same course, but it was surprising how different the 'same' course could be from one ring to the other.  One jump at a slightly different angle could make quite a difference.
Here's Luna's last Gamblers run.  I was really pleased how she got that first weave, and then got back there to do it again.  Not so thrilled when she popped out though at the 11th pole.  After that it was a bit of a mess. She said that there was no way she was going to do those weaves for a third time. Oh well!
This homeless guy showed up and fell asleep in my chair! 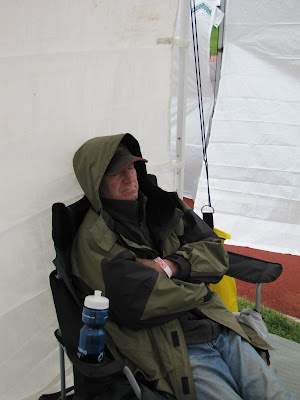 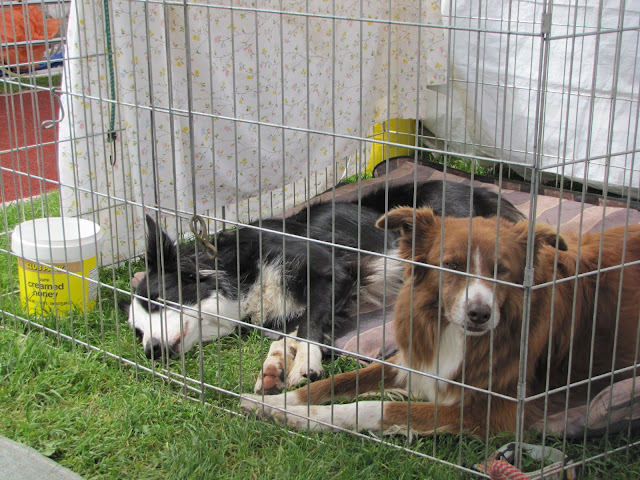 And then looked kind of cute/weird while waiting for the results to be announced. 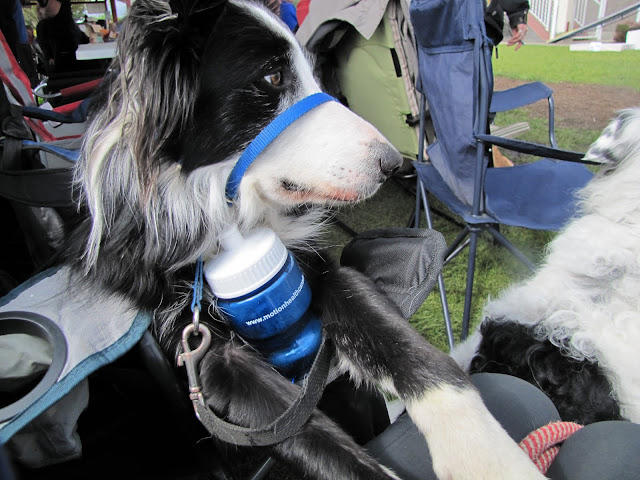 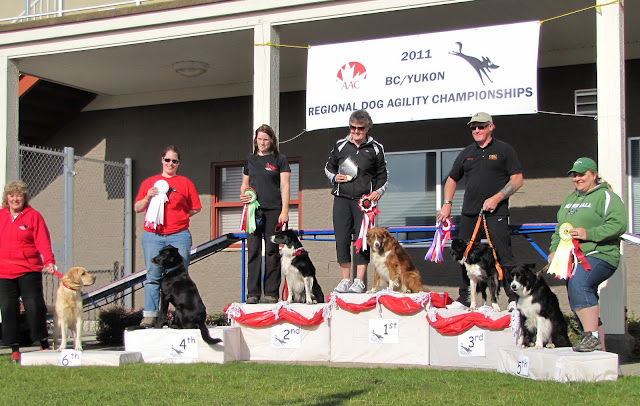 We wanted to try for a better individual shot on the podium after it was all over, but everyone else had the same idea.  We gave up and just went out onto the field and took a photo there. 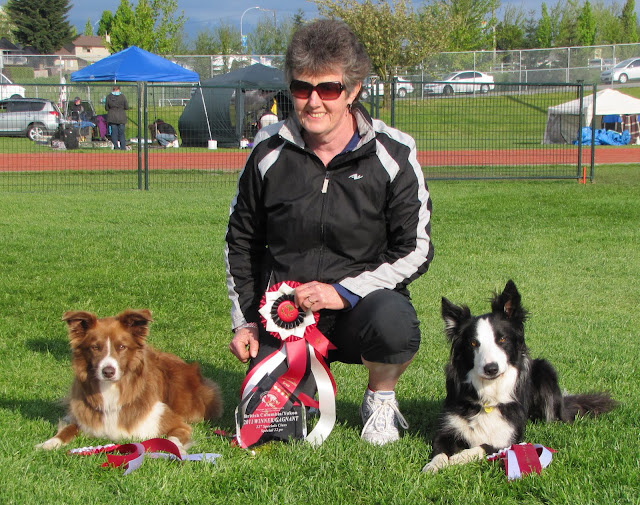