The last month or so I've made some effort to do something that you could officially call exercise.  When you have a farm of sorts, you are always doing some physical kind of stuff, but these days we tend to take our time, and don't work ourselves into a sweat on a regular basis.   I wanted to do something that got my heart rate up and kept it there for a little while.  If that something is a thing that exercises the dogs at the same time, so much the better.  I have more than a couple of pounds I'd like to lose, not that this is enough to shed them very fast, but it's better than nothing.  So sometime between  6:30 and 8:30 am I head down the road in my 'athletic gear' (yeah, I want to make it look like I'm officially exercising).  I have Jake and Luna in tow, well maybe it's more like they have me in tow, but they have got with the program now, and the pulling on the leash is pretty minimal.  I usually start out at a run from our place.  I really am not a runner, but the first part is a bit downhill, so I feel like I want to run.  When I hit the uphill to our neighbours driveway, quite often I walk and then run again at the next downhill.  I go two miles as fast as I can walk it, with two or three little stints of running mixed in.  It takes me about 25 minutes.  I heard by word of mouth that a dog chiropractor said that exercising your dog at a steady trot is an excellent conditioning tool.  When I walk, it's fast enough that both dogs are trotting, although Luna just barely.  When I run, Jake has to run, and Luna gets this great ground covering trot going.  Makes me think of a horse that Meredith had borrowed from a friend to ride in 4-H.  She was a bit long-backed, like Luna, and she had this great ground covering trot also.  The dogs travel in front of me.  Jake likes to walk out to the right, on the pavement.  If I say 'car', he drops back behind me and into the heel position.  For some weird reason though he seems to prefer to be on the pavement rather than on the grass shoulder.  Every once in a while, but not every walk,  he will turn back at me and give me this look like I am the most wonderful person in the world......awwww:)   Or he'll turn to Luna and sniff her face and maybe give her a lick, like she's the best friend he could have.  Sweet Jake:)
The photos are taken on our driveway, I didn't want to take the camera with me. 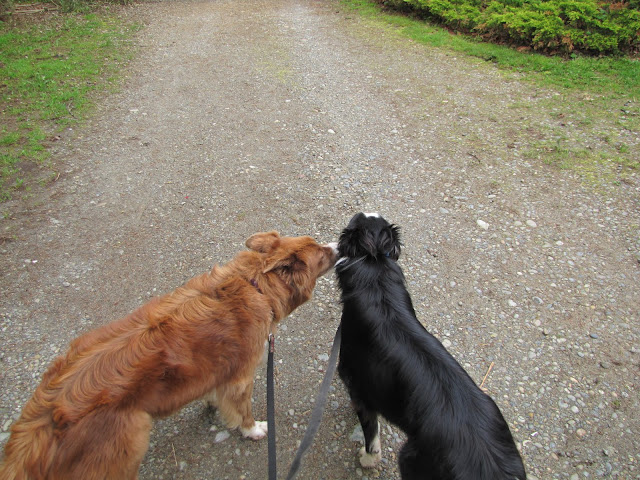 This isn't the 'look'.  His whole face and ears would be softer looking 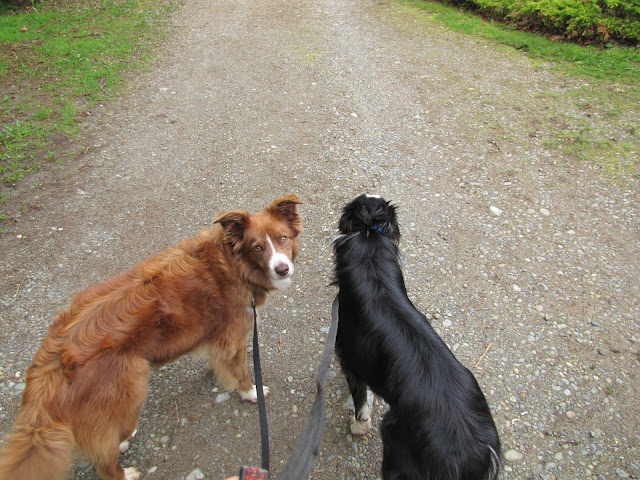 The road we live on is a bit of a commuter route to get to the freeway, so that time in the morning, the cars can be going by pretty fast.  Unless I'm sure I recognize the vehicle, I usually don't look at the driver.  Well I can't really see them anyway through the tinted windshield, and then if it actually IS someone I know, and I don't realize it, and don't wave, they might take offense.  So most of the time I act preoccupied, and then I don't have to worry if it's someone I know or not.  The other day I glanced up and someone in a red car, don't know who the heck it was, waved at me with one hand and the other hand was holding her phone to her ear (illegal here). Yeah, well I'd rather she kept at least one hand on the wheel, considering that I'm pretty sure she didn't know me.  It's always interesting how the cars pass us.  I walk facing into traffic of course, and try to get on the shoulder, but if it's all wet and tall grass, I don't really.  Some people seem to think they are doing you a favour by moving over a whole two or three feet.  Never mind the fact that no one is coming the other way, and that they can see ahead for half a mile or more.  Gotta love the ones that move right over to the other side of the road a couple of hundred feet before they get to you.
Usually I see something a bit interesting, even if it's just a pair of mating crows:)  The other morning I saw one neighbour pull out with his big cube van, and rip the lattice work off a section of the fence he was cosied up to.
The neighbours dog that is chained out it the middle of the front lawn.... well now it's a dirt patch.... barks and lunges at us.  Uggghhh.  At least it's not out here all the time, and I have seen it going out in the truck with the owner sometimes.  Great dog owners they are not:(  I always speak to the dog, and keep meaning to take a dog biscuit that I can toss it's way, but so far haven't remembered.


Yesterday morning I was so organized for the farmers market that I even had time to do my walk/run before I left.  It was about 6:30, and it was a beautiful morning, mild and the sun came out.  An hour and a half later when I got to the market to set up, the clouds there were just about on the ground, and it was pouring rain.
And Luna says...'can we just get going'... 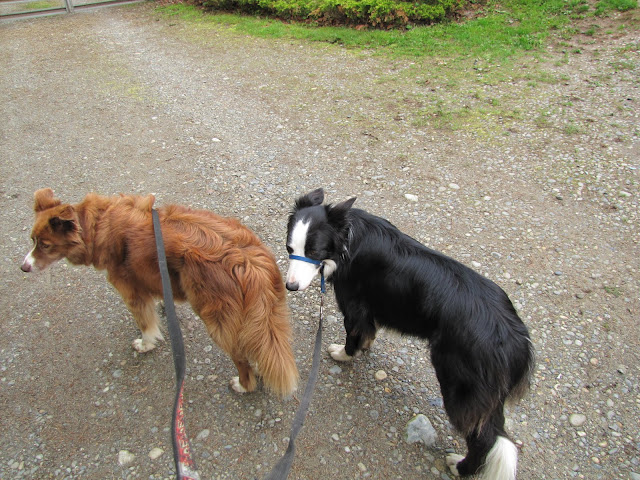 This morning I'm thinking it's time to change it up a bit.  I'm planning on heading out on my bike.  Of course though now I've 'trained' Jake and Luna to expect that they are going out.  I might just ride the bike around the small block across the road from us, to give them a bit of a trot/run,  and then head out to do a bigger loop on my own.  Better get going before the rain (is it ever going to end?) starts up again.
Posted by Karen at 7:41 AM