We had decided this year that we were going to get Pride a waterproof coat for winter.  Most of the time he  just wears the coat he was born with, which thickens up nicely starting in September, when the nights are getting cooler and the days shorter.  We do get a lot of rain though, and if it's windy with that rain, well it can really suck the heat out of a wet horse.  And, considering that we are supposed to get a colder, wetter winter, and that Pride is really getting on in years, we thought it best to get prepared.  He does have a good shelter to go into, and we can bring him down into the shop that was a barn if we have to, but he does, by choice, spend a lot of time in the rain.  This is the first new horse blanket I have ever bought.  When Cathy and I were kids, we did each get a New Zealand rug for our horses.  They were horrible heavy canvas things, with a wool liner.  That was back in the olden days before all the modern waterproof and breathable  fabrics came along.  I have made a few horse blankets in the years in between, but none of them actually fit Pride that well.
Our local Buckerfields had breathable turnout rain sheets on sale, so on Saturday I splurged and bought him this.  We tried it on today, putting a bed sheet between Pride and the new blanket, just in case it didn't fit and we had to return it.  Anyway, it seemed to fit really well, with lots of room for movement, two straps passing under the belly, and a strap around each hind leg.  We left it on this morning, it was only a light drizzle, but I'm glad we did, because the rain just got heavier until it was really pouring. 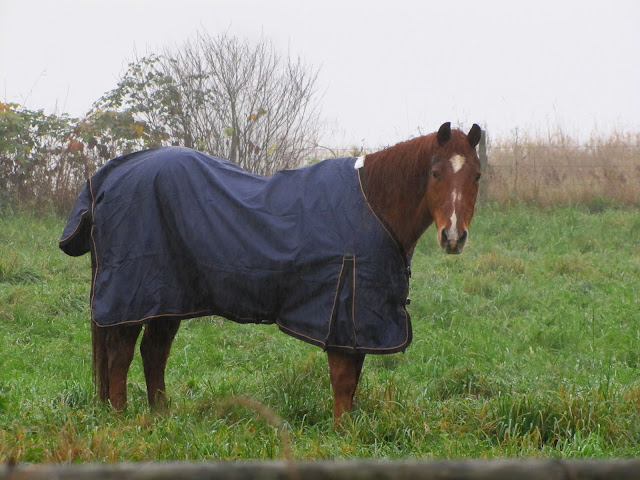 And while I was at Buckerfield's, of course I had to check out the dog section.  What did I see there, but dog coats on sale.  The only dog I have ever had that had a coat was our first little dog when I was a teenager.  I did make her a little rain coat.  Some days, though, coming back in after a walk, and having to dry off three wet and dirty (in Luna's case) dogs, well it just gets a little old. 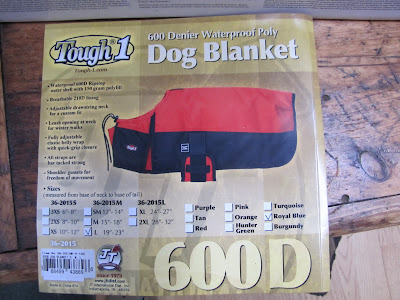 So I bought one of those too.  For $18 I didn't think I could go too far wrong.  The dog it fits best is Calli.  All three dogs are similar in body length, but Calli has a deeper chest, and is broader, so fills out the coat better.  It is a bit padded, which I'd rather not have, but what the heck.  I'm a seamstress, and I knew at that price, there was no way I could make something comparable.  I did have to make some adjustments.  It had overly large shoulder gussets, which I sewed half way down, to where the colour changes.  It also had a slot at the top for a harness ring, but I sewed a piece of webbing over that.
Calli tested it out on a rainy walk yesterday, and it was just fine.  She didn't seem to get hot underneath it.  We thought we'd give it the ultimate test this morning.  Luna wore it to herd the sheep out.  They were extra freaked out by the blue coat, so they all blasted back into the safety of their barn.
That reminds me of one year when I decided to put a bell on April (our old sheep) and put all the sheep out in the back hay field.  The bell was so that I could hear them if they started to run, (if something was bothering them) and I thought the sound of it might discourage the coyotes.  It was so funny though.  April was scared of the bell, so she started to run.  The noise of the clanging bell made all the other sheep run.  April was running to try to catch up to them, and they were running to try keep away from April.  It was a lost cause, and some exhausted, stressed out sheep, so I had to take the bell off.
This morning Pride was really freaked out by Luna in the coat.  If you know horses, it doesn't take much, just something a bit different, to make a lot of horses fearful or suspicious.  Then he seemed to figure out that it was only pesty Luna.  Maybe he was jealous of her new coat (we hadn't surprised him with his yet), because then he was doing his best to try to flatten her.
Here is Pride after he got his coat on, staring at Luna in her coat, as though he hadn't already seen her before.
What the heck is that? 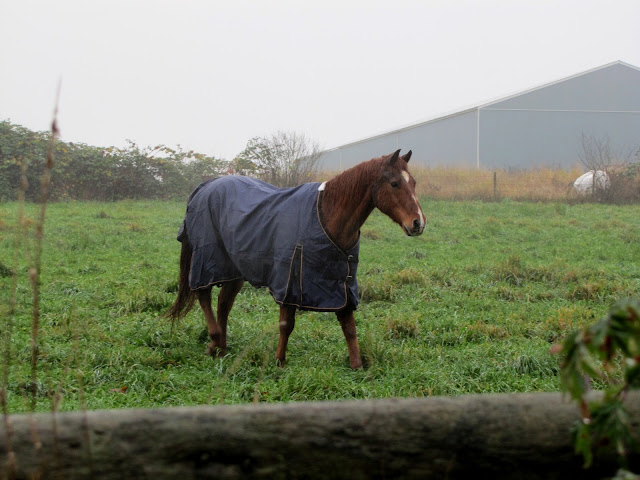 And of course Luna staring back at Pride 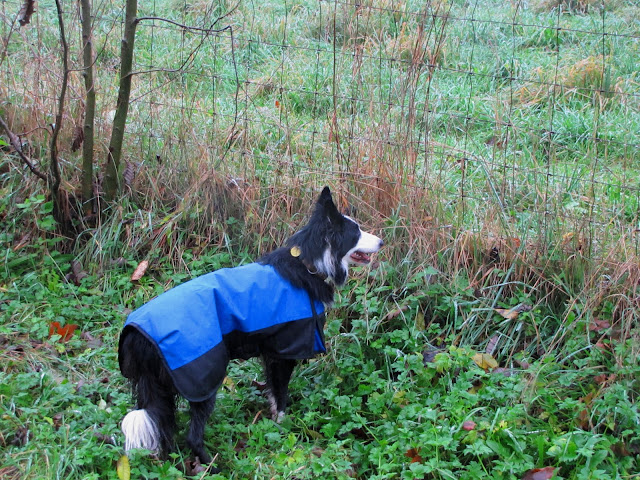 The coat on Luna doesn't fasten tight enough under the belly, so I'd have to make a minor adjustment for her.  She raced through the bush, and then one time shook really hard and it flew off over her head:) Another time it slipped forward and she got a foot caught in the front part, but all that would be  solved by fixing the belly strap so it was tighter.  On her, the sides actually meet under her belly.  Yeah, there's not much to her:)
Well at least there was one dog that was a little dryer and cleaner when we went back in this morning.
Posted by Karen at 8:51 PM