It rained like stink for part of the morning, and then this afternoon we were being teased.  The front of our house faces west, and most of our weather moves in from the west.  From about noon on, we could see a line where the cloud ended and the blue sky began, but it never seemed to get any closer.
When I make my duty call to my mother, if nothing else we discuss the weather.
Ring....Ring.....
A tentative 'hello?' As in she's never quite sure if she wants to talk to whoever is making the call.
'Hi Mum'. I don't bother saying any more than this because I'd have to repeat it.  Got to start the conversation kind of slow.
'Oh hi'
'Did you get some sun today'  (She lives at least 15 miles west of us)
Which leads to a few minutes discussion about today's weather, and maybe yesterday's and the day before's weather as well, which I can never remember in much detail anyway, so I just play along or make something up.  Then the conversation moves on to what various neighbours did, when they went out, and way too many details that I am not at all interested in.
Talk about twitching lace curtains.....well she doesn't have lace curtains, but you know what I mean.
And the relationship between my mother and I, well I could write a book.
Can you tell I didn't have the best of conversations with her tonight...? 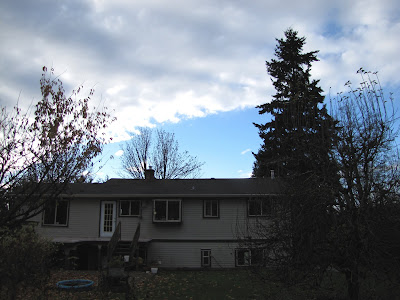 But I digress.  This was the sky to north, which was teasing us as well 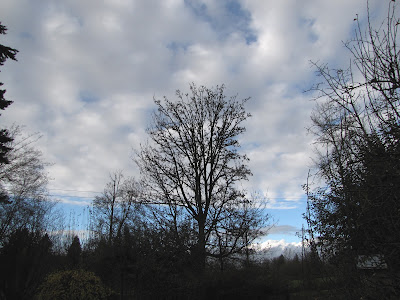 My other half headed off through the junk yard behind the barn, to clean out 'his' chicken coop.  We seem to have 'his' and 'hers' chicken coops now.  Which suits me fine, as they use to be both 'hers', and I was quite willing to hand one over.  I cleaned out mine a few days ago.
I just wanted to let you know that he does some of the work around here too, in case you were wondering.... 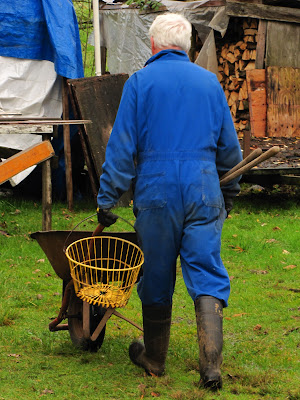 All those chickens go through a lot of feed, which creates a lot of empty feed bags, which pile up in various places were we store feed.  Not sure if we can recycle them, although you'd think we should be able to, after all they are some kind of paper.  Anyway, I thought of a use for a few of them. 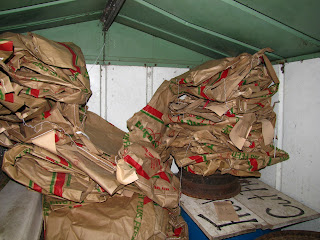 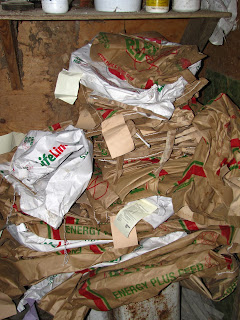 Yep, I was off to dig up some dahlias, and quite honestly, I'm sure you're sick of me talking about them, but I've got to blog about something.
My trusty sidekick Luna was game, and just waiting for the action to start. 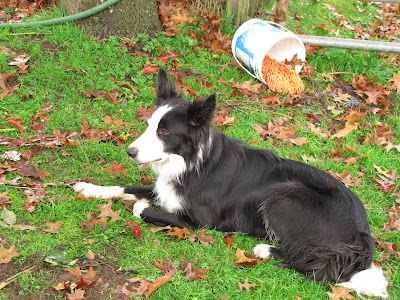 Out comes one clump, loaded with dirt 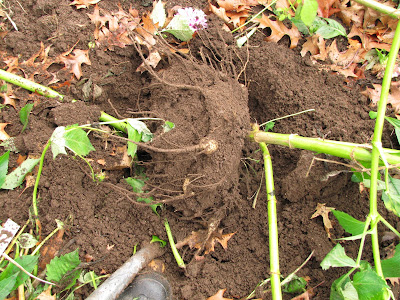 There was a big article in the newspaper how to dig and store your dahlias, and the guy from the dahlia gardens we visited in the summer said he doesn't wash his tubers off, he just knocks the excess dirt off.
I figure it would take longer to knock the dirt off without damaging the tubers, than it does to spray them off.  There is the added advantage that now they only weigh a fraction of what they did.
Luna was in agreement, washing is the way to go. 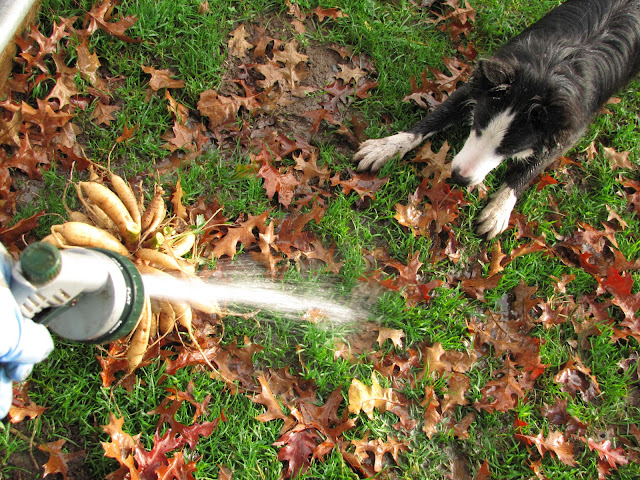 And a zap strap and a label (which in it's former life was a pvc slat off some blinds)
Oh yes, the real reason I took this photo was not to point out the lovely label, but to show that the sun actually did come out for a few minutes, eventually, just before it went down behind the trees. That is the sun shining on that tuber, in case you need me to point it out. 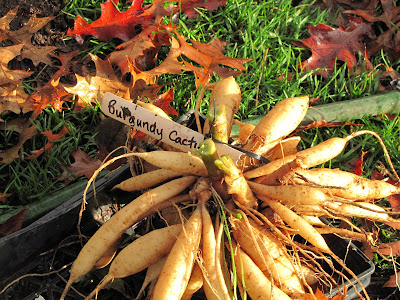 Who's been eating my dahlia?
More than one of them had parts of the tubers eaten away. Voles? 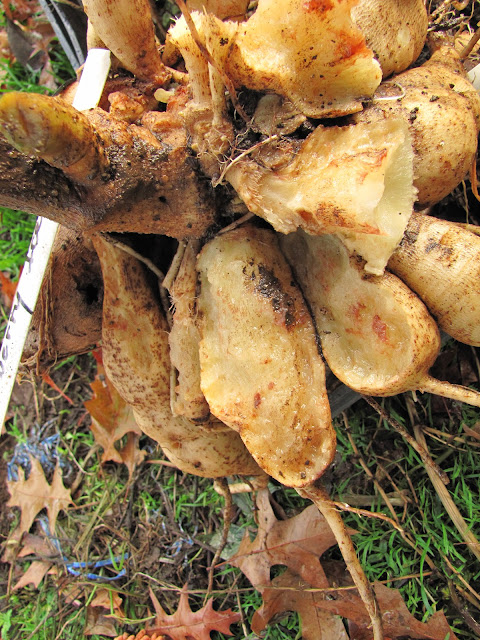 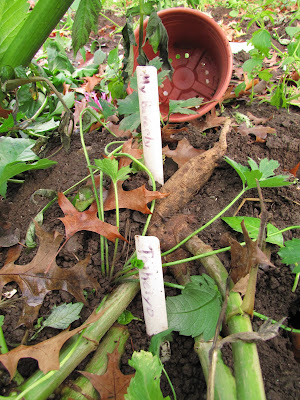 I think I figured out which was which, well maybe.  There might be a few mislabelled dahlias planted or sold next year.
And here's were the feed bags come in.  Some dahlia's I have multiple tubers of, so they all got put together in a feed bag, and the bag was labelled too.  The dahlias in the flats are drying before it it their turn to get stuffed in a bag.  Then they get stuffed into what was the wine cellar, but I guess is now the dahlia cellar.  I could have done with a glass of hot mulled wine when I was done.  I was cold and wet and mucky. 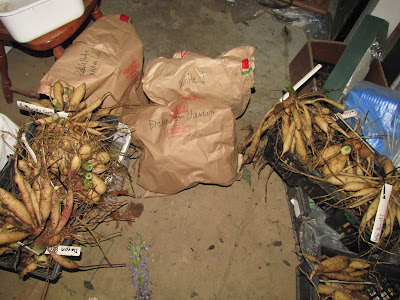 And maybe tomorrow I'll get out to the soggy orchard garden and try get the rest of them dug up before it freezes on the weekend.
I promise not to blog about it though.
I can hear the cheering from here.
Posted by Karen at 11:17 PM