Happy Birthday to Me


I was going to do a big post with lots of pictures, a blatant self promotion, a jolly good birthday bash.  But...my computer is sick, is terribly slow, the CPU is working at 100% capacity or something like that, so I just can't be bothered to fight with it.  The pictures will be nil or at least very limited.   It's weird, I'm typing away here, and then the computer just stops, and the words don't show up until a few seconds later.  I sure make a lot more spelling mistakes when the letters on the screen aren't keeping up with my fingers.
So maybe I'll just throw out some random facts.

I am the world's worst procrastinator

I have no will power when it comes to chocolate and chips, or chocolate chips.  We don't buy chocolate chips to put in cookies, we buy them to eat out of hand.  They are cheaper than chocolate bars.

I was born in England, and came to Canada when I was 6.

The first pet of my own was a hamster called Sammy

I had more than one hamster called Sammy.  One of them was loose in our workshop. I didn't find him until a week later.  Maybe that's the same Sammy that ate part of his dead girlfriend.

From hamsters, I went to gerbils, then guinea pigs, then rabbits, then a dog, then a horse.

My favourite colour used to be green, but I'm not sure any more.  The thrift shops seem to have a shortage of green clothes.  But then I'm being 'green' by buying from a thrift shop.  Oh, it's very confusing.

I'm starting to get the dog's names and the kid's names mixed up.  I gave birth to David, but some days I think it was Jake.

I like to make things, especially out of fabric or wood.  I could build a chicken coop, and make curtains for it's windows.  I can do some plumbing, so the chickens could probably have running water too.  I don't think they'd care though.

I graduated from BCIT (British Columbia Institute of Technology).  I was a Surveyor.  I went and worked on the Alaska Hwy near Fort Nelson.

I lived in a camp, and ate steaks the size of a plate.  I think that's where I left the 125 lbs behind.

I lived in a huge trailer in that camp, with 20 other people.  One of them was an alcoholic.  He proposed to me while inebriated.  He went missing one time, we all searched for him, and we found him in my bed.  End of story.

Oh not quite, Larry and I actually ran into him years later in a restaurant in Princeton.

I like camping, bike riding, walking, hiking, but not jogging.

I taught tennis lessons one summer.  I also worked in a green house and a drafting office.

Our first dog was a cairn terrier mix called Coco.  She would snap at strangers that got too up close and personal.

I got my own dog, an Irish Setter called Megan, when I was 20.  Our next dog was a yellow lab, Bridie, that I inherited from my dad.  The we adopted a black lab called Echo.  Calli was the next dog, then Jake, then Luna.

I joined a competitive soccer team when I was over 40.  I usually played defense.  I quit after a few years, before I broke my ankle like too many other women seemed to do.  The only soccer I had ever played was in PE in school.

I went for a walk first thing this morning, in a light drizzle.  Sort of a scotch mist, that is supposed to be great for your complexion.  I'm sure that I looked 10 years younger when I got back.  Or maybe that was 10 seconds.

If you'd like to send me a birthday present, and I'm sure you would, send a request for my address to the email on the right.  Chocolates, and nacho chips are welcome.  Oh, actually, skip the chocolate, the boxes on top of the fridge aren't empty yet.  Dog toys are good too.  A happy dog makes for a happy owner.

The first present arrived yesterday.  A lovely fluorescent blue and green flying squirrel.  It can be used to make some dogs very happy, or to keep my head dry if it suddenly starts to rain, or Jake's head.  Ooooo, and it's green! I wish I could say that the company has been so thrilled with the free plugs I have given their products on this blog that they have sent me a free toy, but alas, no such luck.  Thank you Cathryn! 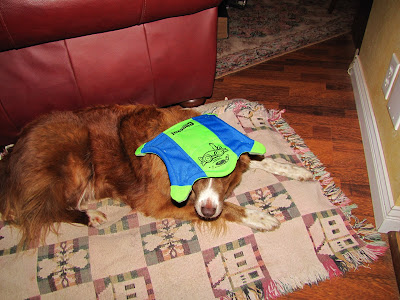 PS  It was so much fun coming up with these silly random facts that I'm going to add more during the day, as the brain wave hits me.
Actually, my first horse was a shared one, who was called Danny, I shared him with Cathy.  Cathy eventually married Dan, but not the horse.  Oops, sorry, this is supposed to be about ME!
Danny stepped on the big toe of my left foot, and smashed the nail.  It's never been the same since.  Note to self, don't wear sandals around a horse.
When I played soccer, I ended up beating up the big toe nail on my right foot, so that it now matches the toe nail on my left.  Note to self - wear nail polish on your toenails when you wear sandals.
I'm right footed like I'm right handed.  I think that makes me left brained.  Or maybe I left my brain somewhere.....
I hate hate hate seeing spelling mistakes in the printed word.  I won't read your blog if it has too many mistakes.  I feel really embarrassed when I find a spelling mistake in something I have published.  In fact I just found out that I spelled (whew, thank goodness for spell check, as I had spelled it 'spelt') British Columbia wrong.  How embarrassing.  Because I had spelled it 'Colombia', which is a country in it's own right, it didn't come up as a mistake.  Late nights make for mistakes.
Why is the computer telling me that 'spelt' is spelled wrong.  It is actually a word,  one of those ancient grains, triticum spelta
Obviously I only notice the spelling mistakes that I know about.  It also requires that I actually activate spell check.  I have upgraded to Google chrome, or else blogger has updated, but now there is automatically a squiggly line under things I have spelled wrong, or the computer doesn't recognize.  Wouldn't you think a computer would recognize 'Google'?  There it goes, another squiggly line, at least there is on my editing page. Ooooh , I just capitalized Google, squiggly line is gone! Huh, Google is a noun, but not yet recognized as a verb?  It is also an american spell check, as I keep being told I have spelled colour and favourite wrong.  Not in this country, I haven't!
Note to self, don't turn these fun, interesting facts into essays. Be sure to let me know if you find a mistake, so I can feel embarrassed.  Keeps me grounded you know.
I went to my first yoga class this morning.  Note to self, nail polish and a pedicure are a requirement before taking a yoga class. Bare feet are expected, in fact your socks slip on the mat, so unfortunately I had to take them off.  I'm sure none of you want to see my bare feet after reading all this.
I inherited my dad's nose.  I was a bit self conscious about it when I was younger, but I did grow into it.  Some horrible kid called me Tiny Tim.  Why didn't he call me Barbra Streisand?
Okay, I was embarrassed.  My daughter informed me that I had spelled a word wrong.  Well actually the word was spelled right, but it wasn't the right word in that spot.  KWIM?  So technically not a spelling mistake, but a mistake all the same, and my face is red, or is it green?
Guess what, the computer is actually cooperating today.  It must have felt it owed me a present.  Right on!
I had so much fun doing this post, it has made me happy all day!  Hope you all enjoyed it too.  Maybe I'll make a list of odd random snippets of my life when they come to me, in preparation for another post like this.  Well it sounds like a good idea, but unless the list is in front of me when I think of them, it won't happen.  I'll procrastinate and say that I'll write it on the list later, and then won't remember it.
And speaking of procrastination, I now have to go and make a bag for someone at the market tomorrow.  I've only had about 3 months to do it, and after putting it off and putting it off, I promised her that she could pick it up tomorrow.  Did I tell you I work best under pressure?
Posted by Karen at 12:24 AM