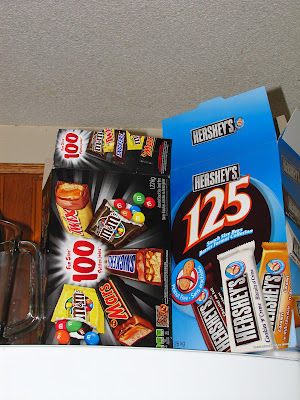 After buying Halloween candy on Monday, because it was half price, and then proceeding to gorge myself on it for a couple of days, I felt like I needed to take some drastic action.  Okay, not exactly drastic, but needed to do something at least to help get rid of those extra calories.  I always used to be a morning person, but seemed to have got out of the way of getting up early lately.  I had decided that this morning I was going to get up and go for a walk right away.  It is only barely getting light at 7:30, so it wasn't a real early start, but was certainly earlier than usual.  I wasn't feeling terribly chipper,  as one of the neighbour's cows bawled all night long.  I decided that she was either calving, or her calf had died.  It wasn't a frantic bawl, just the same thing over and over, like one of those dogs that goes bark, bark, bark, for hours on end.  Every time I woke up during the night, which seemed to be lots, I could hear her.  I would reach up and close the bedroom window, and then a bit later I would have to open it for some fresh air.  I woke before it was light, and she was still at it, and I knew at that point that I wouldn't be getting back to sleep again.  I figured as soon as it was light I would walk over there and see what was going on.  And what do you know, by the time it was light, she had stopped.  Figures:(
Going for a walk without Calli (she can't keep up the speed I was wanting to walk at) involves a bit of subterfuge.   When I put the dogs out the front door, as soon as I was sure that she had peed, I shut her outside and then quickly grabbed the leashes and my runners which are kept downstairs and took them upstairs.  Let the dogs in, Calli went back to her bed, and the rest of us headed up stairs.  Got dressed, and slipped out the back door and down the steps, hushing Jake and Luna so they wouldn't get all excited and start barking. 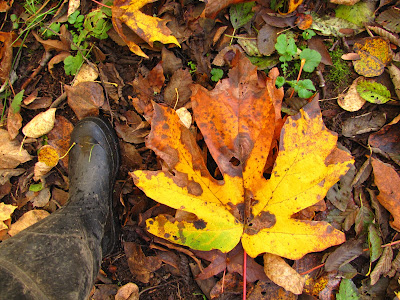 I love being outside at that time of the morning.  The sun wasn't up yet, but the sky was clear.  I was early enough to see the two young chickens hanging around at the edge of the lawn, above a bank covered in shrubs and hostas.  Underneath one was their mother, laying her morning egg.  I had known she was laying somewhere , but wasn't sure where.   I had thought about taking my camera on the walk, but figured there wasn't much point.  So we get down the road a few hundred feet and a coyote appears out of the ditch and crosses the road about three hundred feet ahead of us.  That got Jake and Luna pretty excited, but we kept walking, although they were straining on the leashes at that point.  When we are about 150 feet away, another one appears at the same spot and trots across the road.  Jake and Luna are going ballistic, barking hysterically, and Jake is taking out his frustration on Luna.  Thank goodness they were on leash, as I don't think I would have been able to stop them going after the second one.  It was big and bushy and healthy looking.  They are so brazen, they take their time crossing the road, and then just stand in the field and look at us as we go by.  They know how much distance to keep between you and themselves.  If you try chase them, they just lope nonchalantly in front, maintaining that same safe distance.
We survived the coyote appearance, and things calmed down a bit.  The next thing we see is a poor cat that lost a fight with a car.  Then on past one of our farmer neighbours, but really one of those farmers that gives the rest of them a bad name.  And there is the latest dog, tied to a log on the front lawn, lunging and barking at us.  Of course that gets Luna reacting back.  I don't know why they even have a flipping dog.  They don't do anything with them, the previous ones have spent their lives on a chain.   When I saw one of the daughters with this one as a few month old pup, walking it up the road, I was hopeful it was going to lead a better life.  I stopped to talk to her, talked about training methods, blah blah blah.
I've heard it barking, that bark, bark, bark, of a bored lonely dog with nothing better to do.  I have seen the SPCA in there a time or two over the years, but nothing seems to change.  Some people just don't seem to get it.
Ugh.  Then I have to walk past the field, or more like mud hole where their cattle are.  What a mess.  The cattle never look very good.    The field they are in never gets much chance to recover, and in winter it is one big mucky mess, with too many cattle on it.  Years ago ourselves and a few other neighbours wrote a letter complaining about the conditions the cattle were kept in.  I complained to the authorities, nothing seemed to change.  Now I just try not to look too much.
On the way back, nature's clean up crew, a flock of crows, were working on the poor cat.  I checked under the shrub, and there were 15 eggs, including one still warm from this morning.  I took that one in and then will collect the rest later.  We and the dogs will eat those.  I had more candy today, did I tell you I have no will power, so I had better walk again tomorrow morning.  Unfortunately it might be raining.
Posted by Karen at 12:13 AM