That was the weather forecast for Friday night and Saturday.  Not much fun to be standing outside under a canopy trying to sell your wares at the farmers' market.  When Larry left for the market this morning, it was raining, and he went with rain gear and rubber boots.  I was at home to get ready for Sunday's market.
The first order of the day was to take the dogs for their morning run
Come on, can you hurry up and open this gate! 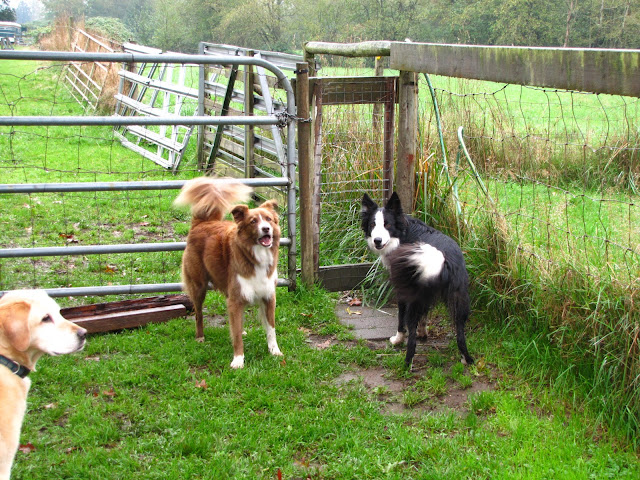 The first stop was Pride.  He was rather ticked that I forgot his apple, and was nosing the plastic bag I had my taken my camera out of. 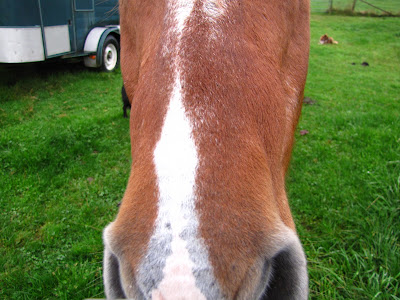 Luna was making sure he didn't make any wrong moves. 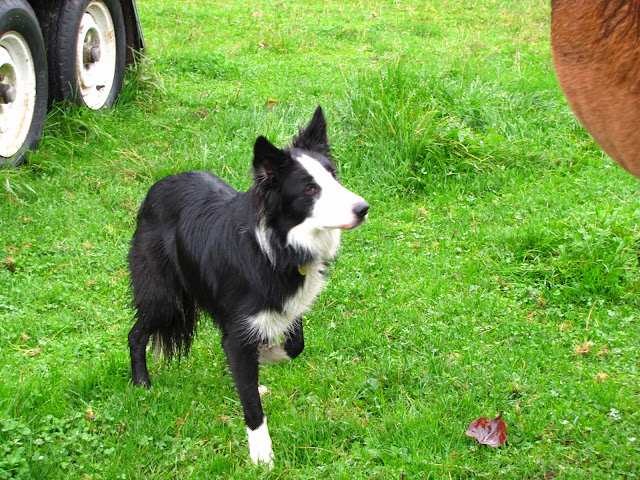 So to make up for the lack of an apple, I let him out in the bush field where we start our walk. 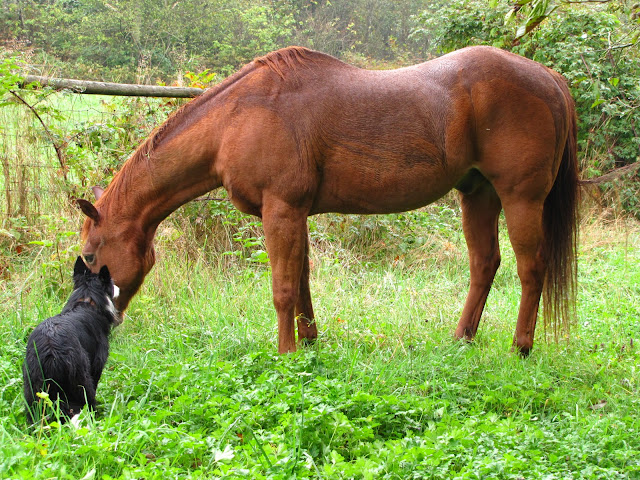 On the way back, we met David bringing a load of manure, to start a new pile for next years garden. 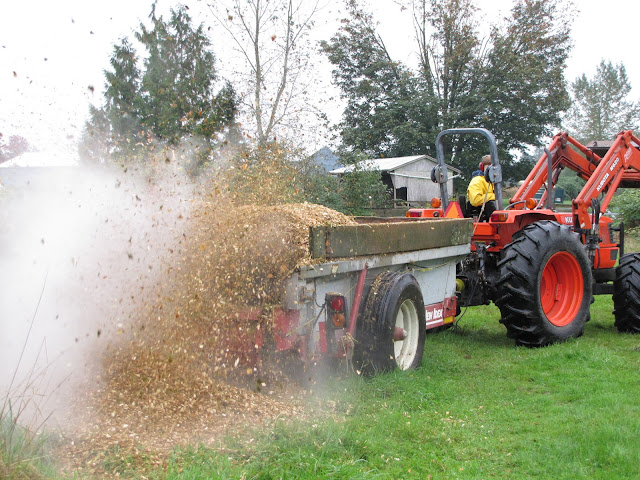 Then it was time for me to pick the dahlias for the market. 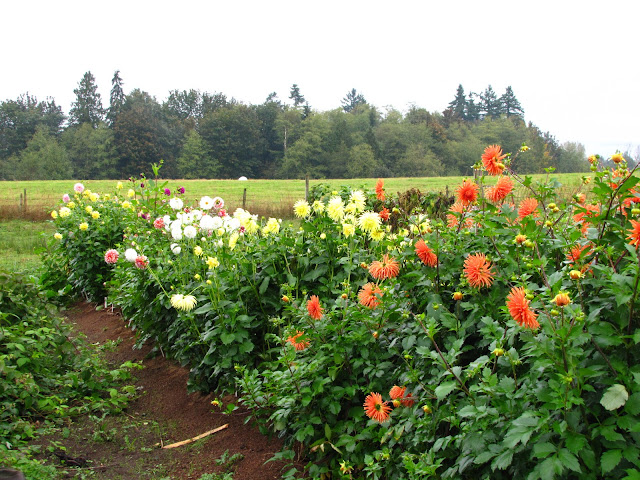 There had been some pretty heavy rain overnight, and some of the dahlias were heavily weighed down. 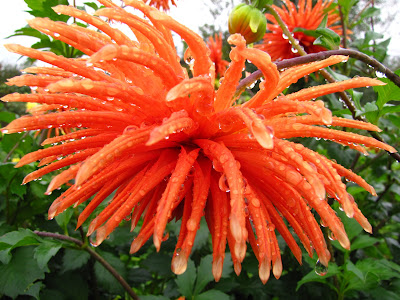 The potatoes I had dug the evening before were washed clean on the top side. 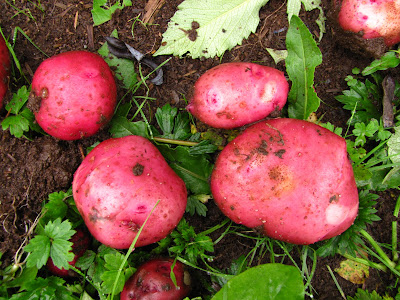 I ended up with 8 buckets of dahlias and sunflowers out of that garden.
Here's the first three 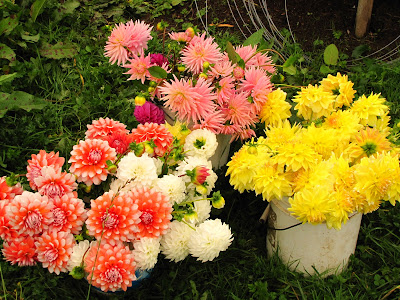 And what's a garden without something to nibble on.  Gotta keep my strength up you know! 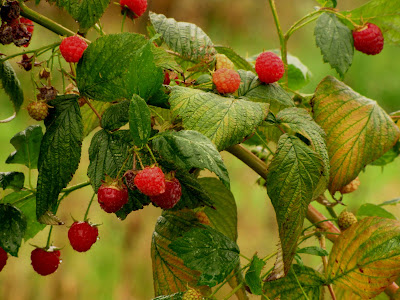 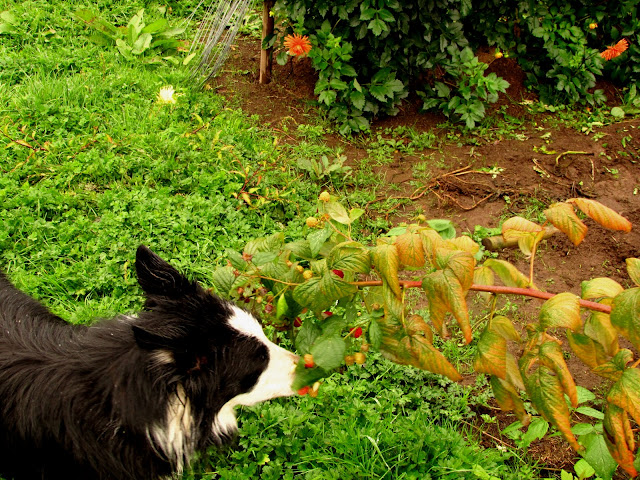 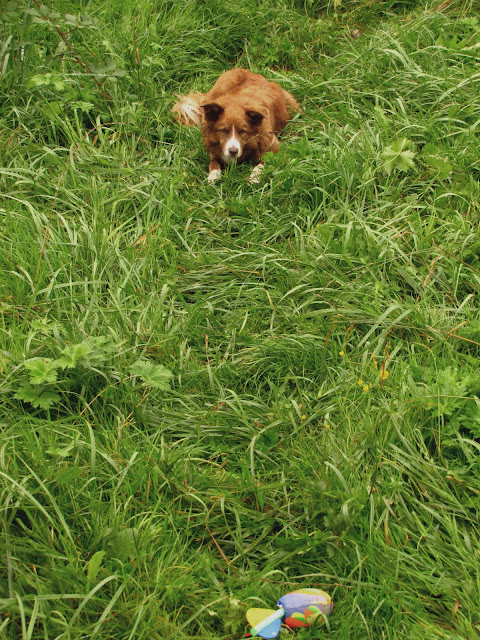 So I threw it over the fence so he had to run down to the end of the field to go through the gate. 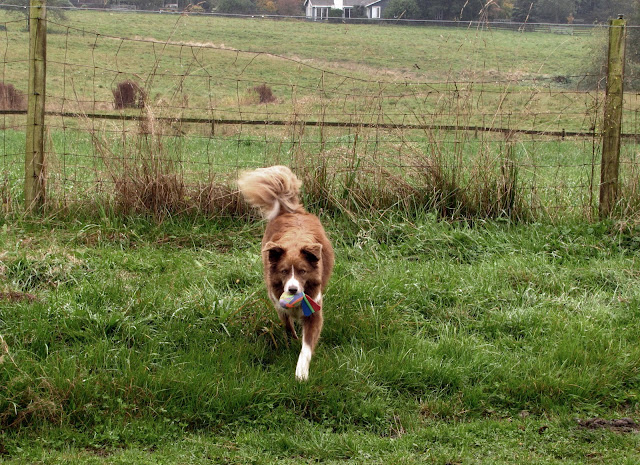 He's smart enough to know to do that, but then figures why run all the way back that way.  It's just easier to pass the toy through the fence back to me. 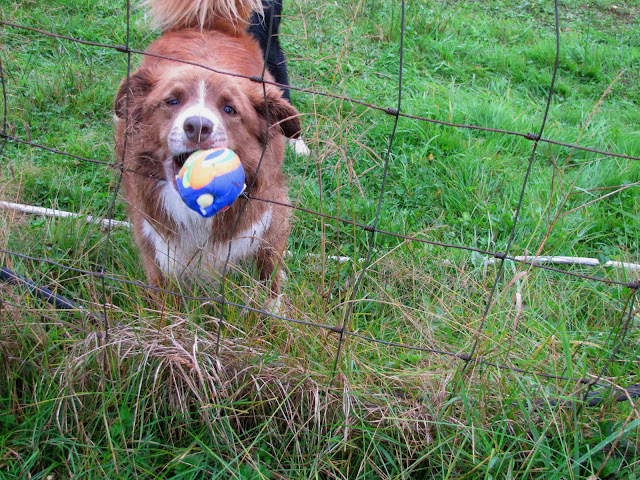 But I had things to do, so Jake and Luna had to make their own fun 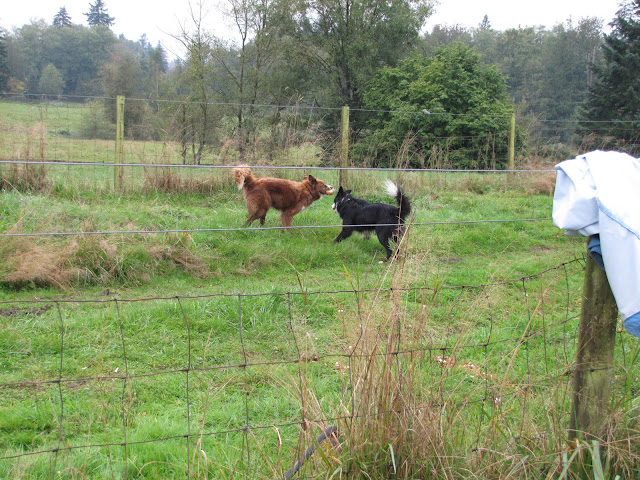 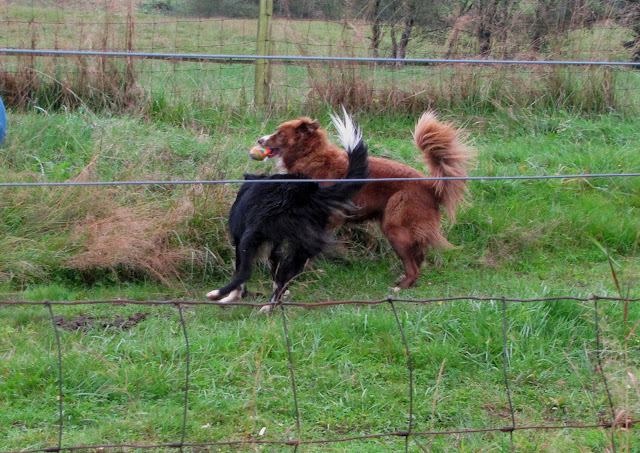 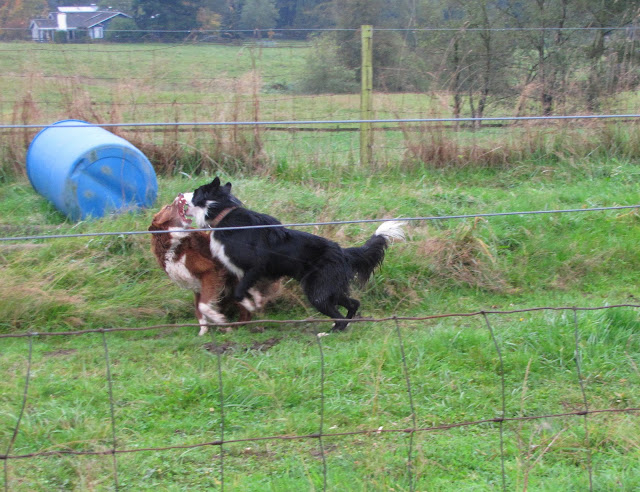 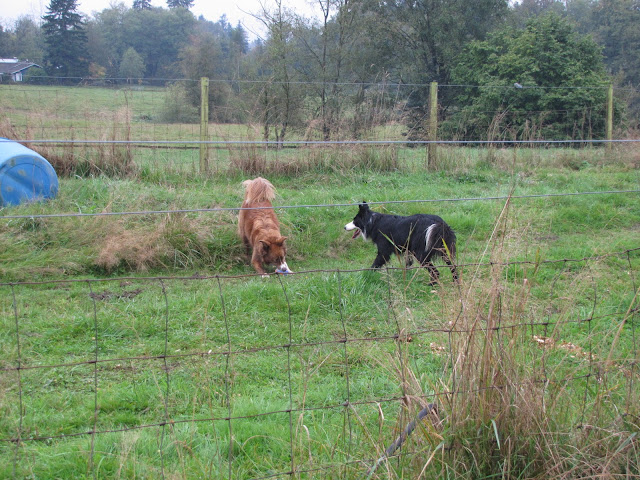 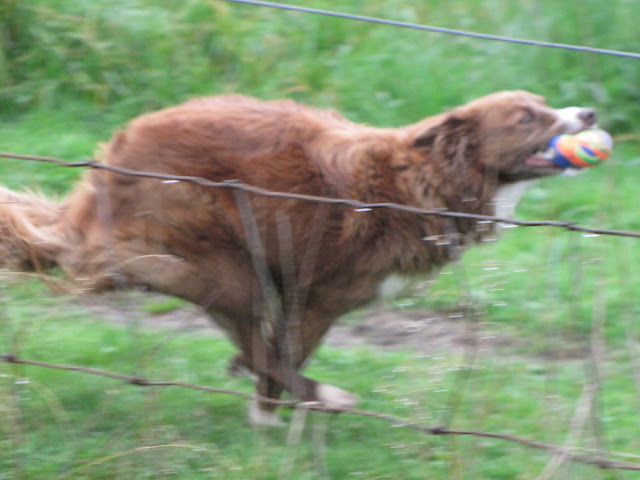 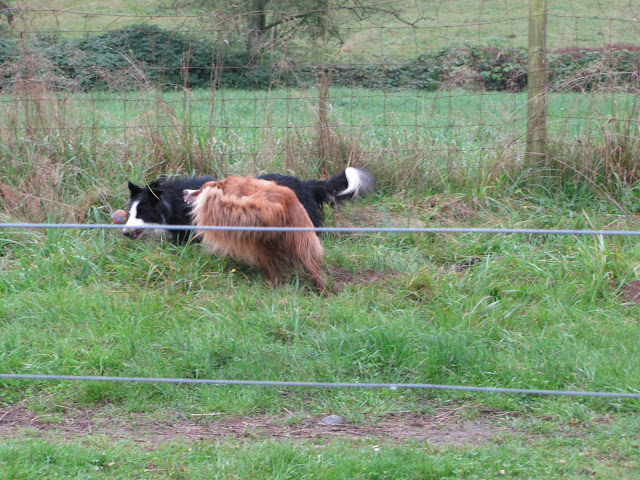 Maybe I'll just bury it, then that pesky Luna can't find it. 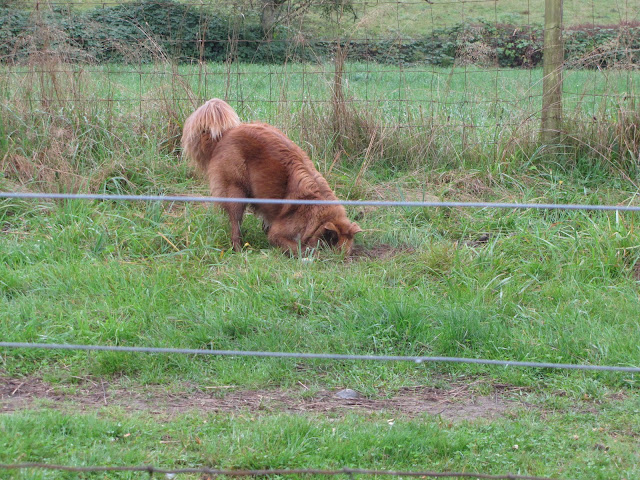 And back down by the house there were another 4 buckets of dahlias to pick.  Thankfully the rain had stopped, and it was actually quite pleasant. 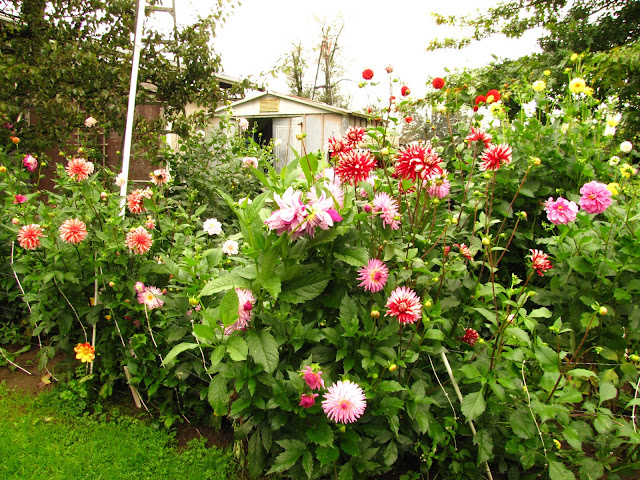 Let's hope lots of people want flowers for their Thanksgiving tables!
Posted by Karen at 11:35 PM